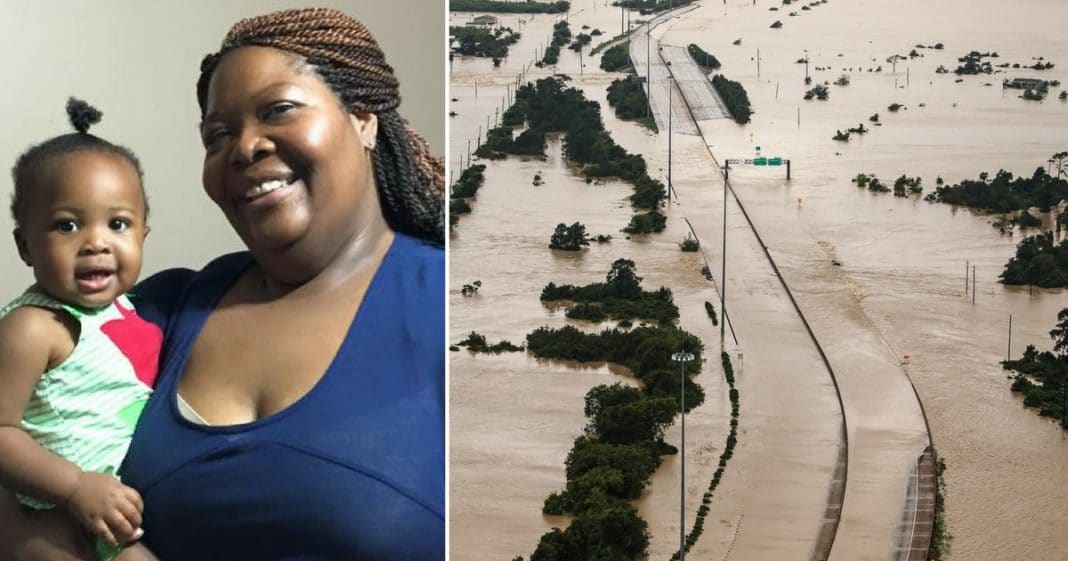 Hurricane Harvey has rained down unimaginable devastation on the city of Houston, Texas, and the surrounding areas. Hundreds of thousands of people have been driven from their homes and local officials have reported at least 30 confirmed and suspected flood-related deaths.

Throughout the course of this tragic event, we have heard countless stories of heroism and selflessness. Men and women have braved the storm and put themselves in harm’s way to rescue people and animals unable to escape the flood.

Out of all the stories we’ve heard, though, this one stands out above the rest – a tragic and heartbreaking story of a mother’s sacrificial love for her child.

On Tuesday, 41-year-old Colette Sulcer was driving on the I-10 service road when the water reached impassable levels. According to a release from the police department, when she realized she couldn’t go any further, she pulled into a movie theater parking lot where her vehicle proceeded to get stuck.

Realizing there was no other way of escape, Colette exited her vehicle and took her 3-year-old daughter with her to find higher ground and safety, but they were swept into a canal and ended up floating about half a mile away from the vehicle.

Two Beaumont police officers and two Beaumont fire rescue divers were patrolling in a Zodiac boat looking for those who needed help. They were the ones who spotted the mother and child floating in the water. The little girl was clinging to her mother as the water quickly pulled them toward a trestle.

The rescuers knew they needed to act fast – if Colette and her daughter went under the trestle they wouldn’t be able to get to them in time.

They quickly reached the pair and pulled them from the water. Amazingly, the little girl, despite suffering from hypothermia, was okay. Colette, however, was unresponsive.

“They were in the water for quite some time,” said Officer Carol Riley, a spokeswoman for the Beaumont Police Department. “When the baby was found the baby was clinging to her. The mother did the best she could to keep her child up over the water.”

“The baby also had a backpack that was helping her float on her back and she was holding on to her mom,” Riley added.

First responders took turns performing CPR on Colette until they could get her to an ambulance. Sadly, she never revived.

Her daughter was taken to a nearby hospital and was listed in stable condition. She is now being cared for by family members.

Colette made the ultimate sacrifice for her little girl that day, positioning her so her head would be above the water as they were swept away by the flood. Even in death, she protected her daughter and kept her alive.

That is a mother’s love – always putting her child’s needs and safety above her own. Riley says Colette’s sacrifice “absolutely saved the child’s life.”

Our hearts break for this young girl and for this heroic mother’s friends and loved ones. Her actions that day will not be forgotten.

Were you touched by this mother’s sacrifice for her daughter? So share this.

This article has been updated to include the mother’s name.