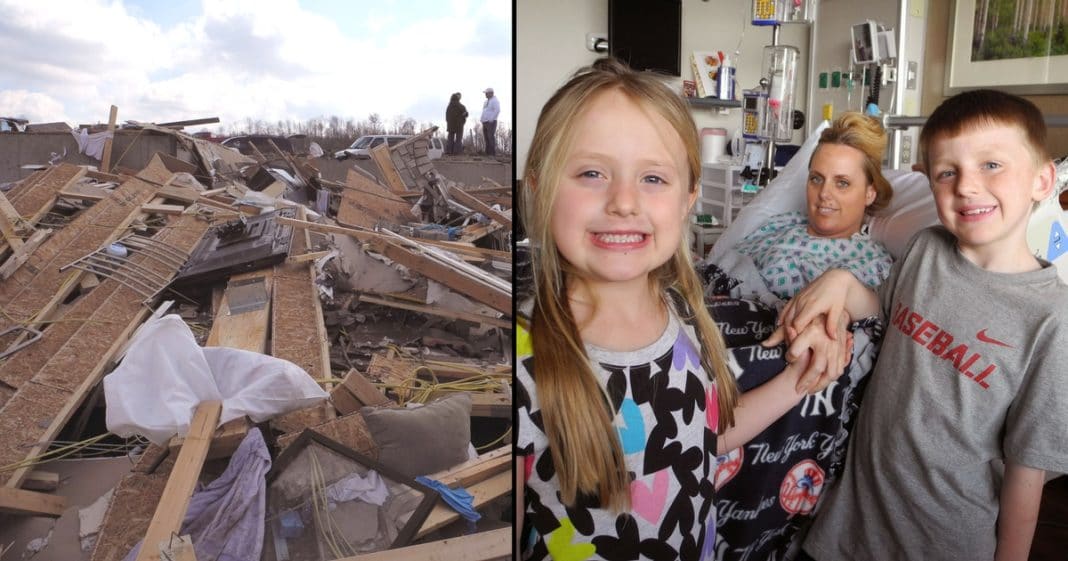 In life, events happen where there is no explanation or reason given. You either roll with the punches or curl up and give into despair. One Indiana mom chose to become an inspiration for others after losing both legs when an F4 tornado ripped through her home.

It was 2012 when wife and mother Stephanie Decker made the life-altering sacrifice to put the lives of her two young children before her own. Stephanie was living in Henryville, Indiana, with her husband, Joe and their two young children, Dominic, 8 and Reese, 5, when a March day turned particularly nasty.

As Stephanie arrived home with her kids, they hurriedly headed to the basement. That’s where Stephanie, now 42, had to make a choice many would hesitate over.

“I don’t even think twice about it,” she said. “I wouldn’t change it for a million bucks. Things happen for a reason. It was my time to step up.”

Stephanie described how her home fell apart around them as the tornado hit. “I looked up and I saw our trampoline that was staked in the ground go flying across the yard,” she recalled. “Then the entire house started to shake. I became petrified at that point, and one of the windows busted in.”

To protect her children, Stephanie grabbed a blanket, wrapped Dominic and Reese in it, and laid down on top of them to provide them some kind of shelter, taking the debris on herself.

“I watched the foundation separate from the house and lift up,” she said.

An F4 tornado with wind gusts of 175 miles per hour ripped through her dwelling. Stephanie glanced up and, to her horror, a 20-foot steel eye beam that once held her family’s home together came falling toward her.

“I could see it in slow motion,” she said. “I was covered in bricks and stones.”

At this point, many would abandon ship, but not Stephanie. She had already made her choice:

Stephanie’s legs became crushed beneath the beam, but her ordeal wasn’t over yet. An F2 tornado blew through what was left of her home. The storm sent a pillar heading straight for Reese.

“The pillar was coming straight for my daughter’s head,” Stephanie recalled. “Now that I only have upper-body movement I can’t cover them, so I’m twisting back and forth taking the brunt of the flying debris. I twisted my body, and it broke eight ribs and punctured my lung.”

Because of his mother’s heroic actions, Reese was safe.

After the storms were gone, Dominic and Reese left their mother to get help. As she lay there, Stephanie made a personal, private pledge: “I knew if I could get out of here I would somehow try and make an impact.”

And she did just that. Exactly one year after she lost her legs, Stephanie started the Stephanie Decker Foundation. This foundation has since assisted 250 children who have lost limbs attend a local sports camp.

This experience has changed Stephanie’s life in other ways too. She now travels around the country as a motivational speaker. She recently took up running with prostheses, and she would also love to be a contestant on Dancing With the Stars.

We love the courageous and strong spirit Stephanie exhibits. Keep on running and, heck, dancing, even if DWTS doesn’t call!

Stephanie serves as a true inspiration to us all. She didn’t back down when faced with those storms; she stood her guard and protected her children.

Were you inspired by Stephanie’s heroism as much as we were? So share this!