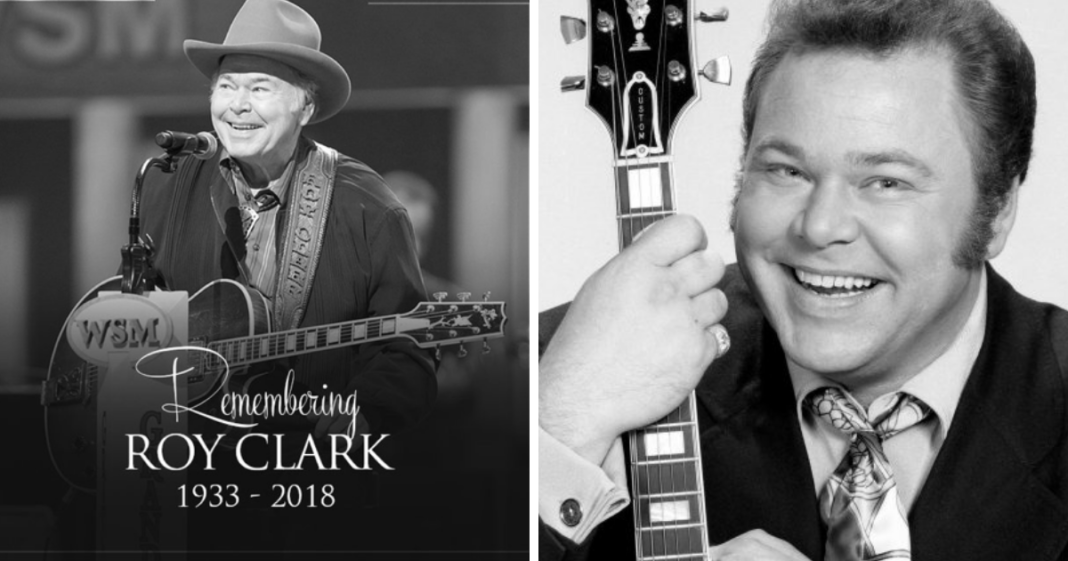 Nowadays, we have musicians, comedians, TV personalities, entertainers, movie stars, and more, but it’s rare to find someone who can play all of those roles and make a living at it. And to play them all at the same time, on the same day in one TV show? It’s not easy to think of someone who can do that. But in earlier times, entertainers had to play multiple roles.

Few people did it better than the talented staff of “Hee Haw,” a country variety show that ran from 1969 to 1997. We’ve just found out that the most famous Hee Haw star, legendary country entertainer Roy Clark, died on Thursday. He was 85 years old and passed away at his Tulsa, Oklahoma home from complications of pneumonia.

Clark served as the host of Hee Haw for its entire 24-year run. His sidekick and co-host was Buck Owens.

The Country Music Hall of Fame put up a tribute Tweet to honor Clark, describing him as “a showman and a virtuoso.”

We're sorry to hear about the passing of Roy Clark. Roy Clark made best use of his incredible talent. He was both a showman and a virtuoso, with a love of music that beamed across air waves and into millions of living rooms, where families gathered to watch and listen. pic.twitter.com/FD8lYeejZR

Clark was inducted into the Country Music Hall of Fame in 2009, and told the crowd:

[…] just to be associated yourself with the members of the Country Music Hall of Fame and imagine that your name will be said right along with all the list.

The Grand Ole Opry also honored Clark with a tweet.

"The next chance you get, do somethin' nice for somebody – say 'good day,' hold a door open – and don't wait around for a thank you… you don't need it." — Roy Clark

Roy, thank you for always spreading laughter, kindness, and positivity. We'll keep it goin' for ya! ❤️ pic.twitter.com/Gs3AdJSKQd

The next chance you get, do something’ nice for somebody – say ‘good day,’ hold a door open – and don’t wait around for a thank you… you don’t need it.

Some of Clark’s most famous gigs were being on “The Tonight Show” in the 1960s and 1970s, a rare honor granted to country singers at that time. He also played at Mickey Mantle’s memorial service, per the legendary Yankee player’s request. He headlined a 1976 tour of the Soviet Union, which broke boundaries that were closed to most Americans.

Musicians like Brad Paisley and Travis Tritt give Clark credit for their own love of music and musical talent, with Keith Urban saying that Roy Clark was his first CMA memory.

Roy Clark shaped my path. My Papaw introduced me to his music as a toddler. Every Saturday we’d watch Hee Haw. My first guitar book was a Roy Clark guitar method. I practiced his style, then practiced making his facial expressions. He was a hero. And so many have the same story.

Paisley pointed out that his story was not unique.

I was saddened to hear the news that Roy Clark has passed away. His guitar and banjo picking was such an inspiration to me. #RIPRoyClark https://t.co/fP0a4vAfvb

My first CMA memory is sitting on my living room floor watching Roy Clark tear it up. Sending my love and respect to him and his family for all he did. – KU

The guitar I’ve been playing onstage for the last two years is signed by the legend himself. It’s now retired. God bless my friend Roy Clark. Rest In Peace, my brother. pic.twitter.com/KtzXf1NlD5

In his autobiography, My Life In Spite Of Myself, he said:

‘Yesterday, When I Was Young’ had “opened a lot of people’s eyes not only to what I could do but to the whole fertile and still largely untapped field of country music, from the Glen Campbells and the Kenny Rogerses, right on through to the Garth Brookses and Vince Gills.”

Just got word that Roy Clark has passed.
I’ve known him for 60 years and he was a fine musician and entertainer
Rest In Peace Buddy, you will be remembered

More tributes to Clark include some of the biggest names in country music.

“Roy Clark was one of the greatest ever. His spirit will never die. I loved him dearly and he will be missed.” – Dolly Parton

“When I came to Nashville, Roy was one of my favorite stars. I loved the way he hosted the CMA’s and Hee Haw. It was always an honor to be on the same stage with him. I am already missing Roy’s big smile.” – Crystal Gayle

“The Halsey family’s hearts are filled with gratitude for the many years (59) of friendship and business association. He was a rare combination of talent and generosity. Roy Clark brought a special kind of healing to the world. He will be missed by the multitudes. – Jim Halsey, friend and manager

“I remember Roy as a great musician and singer. But more than that, he was a great human being. Always laughing, always uplifting to those around him. Doing shows with Roy on Hee Haw was such a wonderful experience. There is a vacant spot in Nashville now that he is gone. RIP Roy Clark” – Lee Greenwood

“Getting to REALLY know Roy Clark is one of highlights of my country career. I first met him on HEE HAW and the went on to do dozens of shows with him over the years. He was a good friend, we laughed a lot together and he loved Duke’s mayonnaise on his tomato sandwiches.” – T. Graham Brown

To see his amazing talent, check out this older video of him playing the 12th Street Rag on The Jimmy Dean Show. Watch those fingers fly and how he makes funny faces and even tap-dances while he plays. Talk about multi-tasking!

Roy Clark played multiple instruments, including banjo, guitar, classical violin, mandolin, and harmonica. He received his first guitar for Christmas when he was 14 years old. Watch this incredible video of him playing multiple music genres.

For a reminder of his comedic and musical genius, watch the video below.

R.I.P., Mr. Clark. You will be missed. Thank you for the memories.