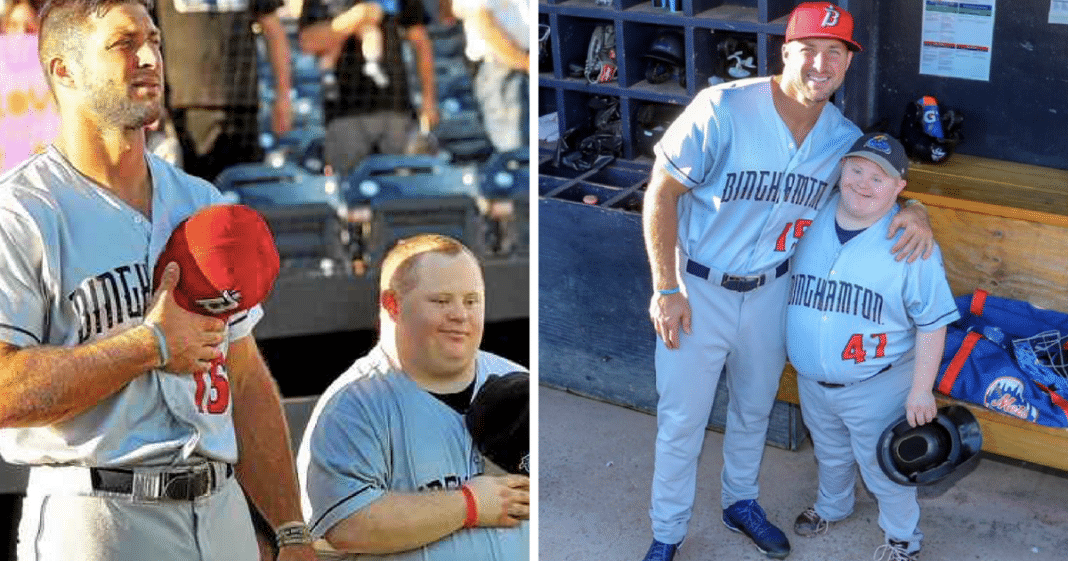 Some athletes are loved for more than just their athleticism. They’re loved for their sportsmanship and the positive impact they seek to create around them. This fellowship is contagious, especially for Tim Tebow.

He’s a humble man with thick skin. A man unafraid to express his faith. Added to these excellent qualities, he has a magnetic personality that shines through whenever he’s around. Tim is very active in the Tim Tebow Foundation, which he dedicates hours of his time to.

A particular group of people Tim has a soft spot for are those with special needs. Tim’s team, the Binghamton Rumble Ponies, traveled to New Jersey to play the Trenton Thunder. Thunder bat boy and local fan-favorite, Tommy Smith, is a popular figure at Arm & Hammer Park. He has down syndrome.

While his team faced off against the Thunder, Tim made a move to try to convince Tommy Smith to switch dugouts.

Smith appeared to waver in his decision. He was torn between Tim’s charm and the loyalty to his team.

“He’s awesome,” Tebow said, per The Trentonian. “I was trying to get him to come over and hang with us and be our bat boy, and for some reason he wouldn’t do it. … He even said yes, and then after a minute he was like, ‘No, I gotta stay.’”

Tim won. The opposing bat boy threw on a Rumble Ponies jersey. He compromised by leaving his Thunder helmet on as he stood beside Tim during the National Anthem.

The Thunder won the game 7-3; Thunder coach, Jay Bell, joked about trading his bat boy. “It’s one of the things I love about minor league baseball,” Bell told The Trentonian. “Tim is really good with Tommy and people who are around the baseball field like Tommy. He is extraordinary. He’s done a really good job. I’ve heard nothing but fantastic stories about him.”

Tommy, thanks for all your help and for being an amazing bat boy! Your joy is contagious! pic.twitter.com/HXWz9CocjF

The coach continued: “It’s pretty cool. He’s wanted to go to Binghamton. I may draw up some papers tomorrow, so we’ll see.”

In the one game Tommy served as bat boy, Tim went 2-for-4 with a pair of doubles. The 27-year-old bat boy made an even greater impression on the baseball player. “He’s really cool,” Tebow told The Trentonian. “I love it every time he gets a bat and he starts putting his hands up and getting crowd hype. It brings me a lot of joy to watch that and also watch  the crowd react to him.”

Despite his busy schedule, Tim vows he’ll always find time to help those in need. “Thankfully I have a really great team, but you can’t train all day, right?” Tebow said. “You’ve got to have a little balance. I stay involved in [the Tim Tebow Foundation] heavily and working on that and everything that we’re doing at the foundation and everything else we’ve got going on.”