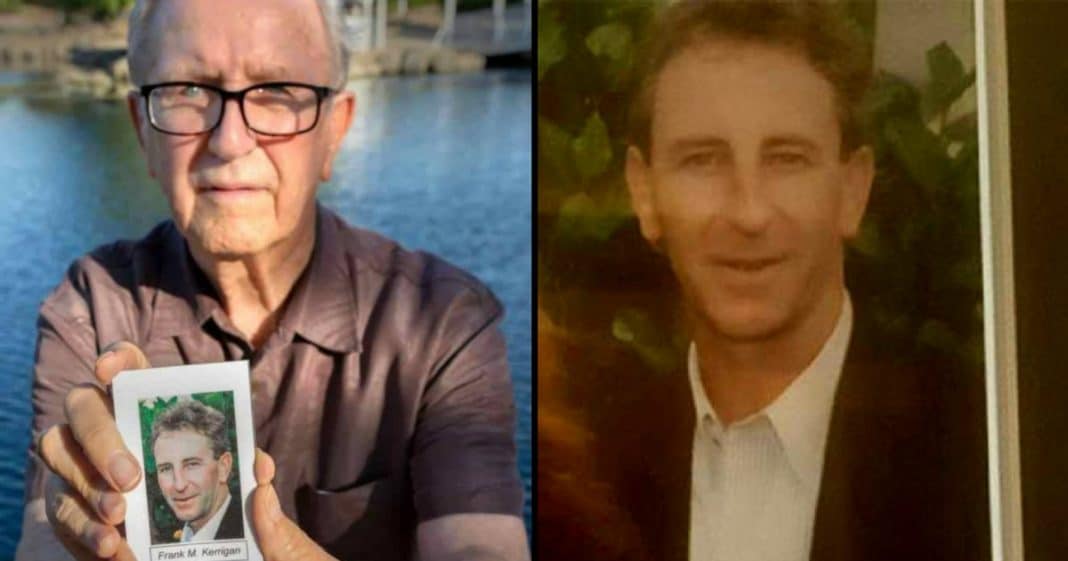 It doesn’t matter if your child is 6 or 60 – when you’re a parent, you always worry about your kids. It’s only natural to want them to be safe and living their best lives.

For Frank Kerrigan, 82, that worry has always been compounded when it comes to his son, also named Frank. The younger Frank, 57, has struggled with mental illness and homelessness for much of his life.

That’s why when authorities told the elder Frank to call the coroner’s office, while he was heartbroken, he wasn’t that surprised.

The coroner told him his son’s body had been found behind a Verizon store in Fountain Valley, California. Frank asked if he should come identify the body, but he was told that wasn’t necessary as it had already been identified through fingerprints.

The heartbroken family prepared a beautiful funeral service for the younger Frank – one that cost about $20,000 – and buried him near Frank’s late wife, Catherine.

Then, 11 days later, Frank got a call that left him floored. It was from his friend Bill Shinker, who had been a pall-bearer at the funeral.

“Your son is alive,” Bill told him.

Frank couldn’t believe what he was hearing. He told Bill to put Frank on the phone, and when he heard his son say, “Hi dad,” he knew Frank was truly alive!

At first, the family had no idea how such a monumental mix-up could occur, but slowly the pieces began to fall together.

Frank had thought it was strange when the personal belongings he received from the Coroner’s Office were in a blue bag instead of the black attache case his son always carried. Also missing was a watch that was one of Frank’s prized possessions and his favorite writing pen.

What Frank discovered later was that the coroner had run the fingerprints of the dead man through a law enforcement database but didn’t get a match. Then, when someone said the man looked like Frank – who had coincidentally grown up close to the store where the body was found – they pulled up his driver’s license and made a visual identification.

When the family told county officials that Frank was really alive, they re-ran the fingerprints through that database and discovered they matched someone else.

While the family is, of course, overjoyed that Frank is alive, the whole situation has been understandably traumatic for everyone involved.

“We lived through our worst fear,” said the younger Frank’s sister, Carole Meikle. “He was dead on the sidewalk. We buried him. Those feelings don’t go away.”

There is also a lot of red tape that now needs untangling. Social Security and other federal agencies believe Frank is dead, so they are withholding disability payments.

In addition, there is the issue of the stranger’s body that is now buried in the plot that was supposed to be Frank’s final resting place.

“We thought we were burying our brother,” Carole said. “Someone else had a beautiful send-off. It’s horrific.”

The family is planning to file a lawsuit claiming that Frank’s civil rights were violated because the Coroner’s Office failed to make adequate efforts to determine if the body was, in fact, Frank’s because he was homeless.

In the meantime, the family is rejoicing that Frank is alive and well and will do all they can to make sure he stays that way.

Were you stunned to read about this incredible case of mistaken identity? So share this!