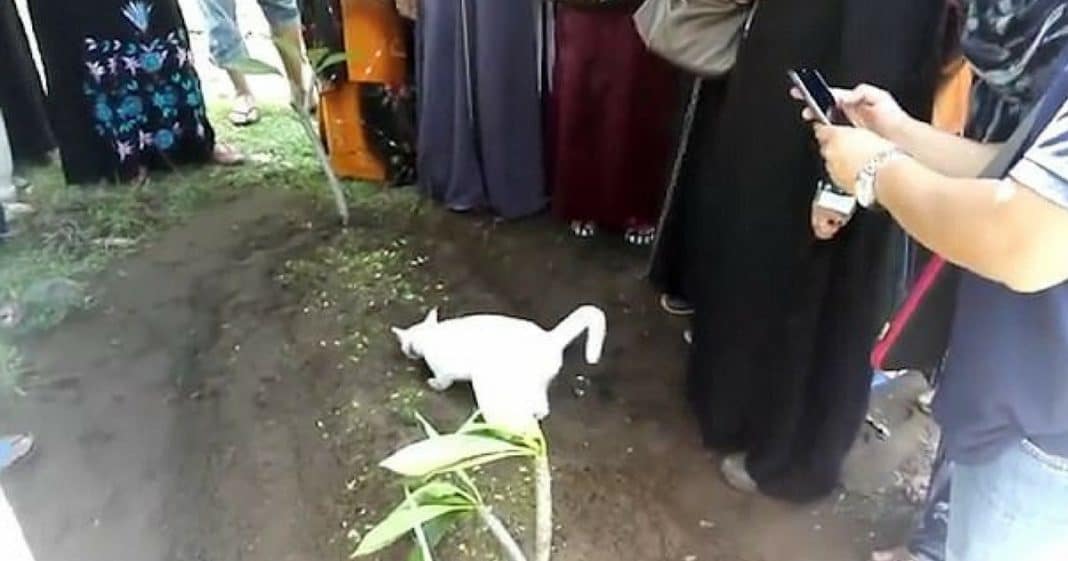 If you have ever had a pet long enough, you know what it feels like to develop an emotional bond with it. You begin to care for it as you would your own child, and in return, your pet will love you like one as well. The connection between an animal and a human is one that can go deeper than anyone would ever think. Animals, domesticated or wild, are smarter than some people give them credit for, and they are able to truly sense the moods, emotions, and feelings of the humans around them.

Among the animals that share in our emotional intelligence is the cat. Scientific studies have opened our eyes to some remarkable insights that are completely natural to cats, but would otherwise seem strange to us. This Malaysian feline in the video below did some never-before-seen antics that left a family bewildered.

While a family was in the middle of burying their loved one, a beautiful white cat arrived and began to do something that was most certainly unexpected, but its dedication to being a part of the service was not one they could easily put an end to. The cat went back and forth between circling the grave and lying down on it. Each time a family member tried to physically move the cat from the grave, the cat would play dead until it got released. When it was picked up and moved, once its paws touched ground, it made its way right back to the grave.

We will never know for certain why this cat was so intrigued by this burial, but we do have a very sensible clue. The grandson of the man who passed away thinks that the cat’s behavior was a final goodbye to his grandfather, as he was a known cat lover. It would not be the first time that an animal shared in the grieving of a loved one’s passing, and there is something to be appreciated in their ability to do so. Animals, whether or not they are our own, can bring so much comfort and warmth to the situation, and I think this cat was trying to do just that.

I hope this family finds peace in their loved one’s passing and solace in knowing that even an animal grieves the gentleman’s great life with them.

Did this cat’s strange surprise you? So share this!