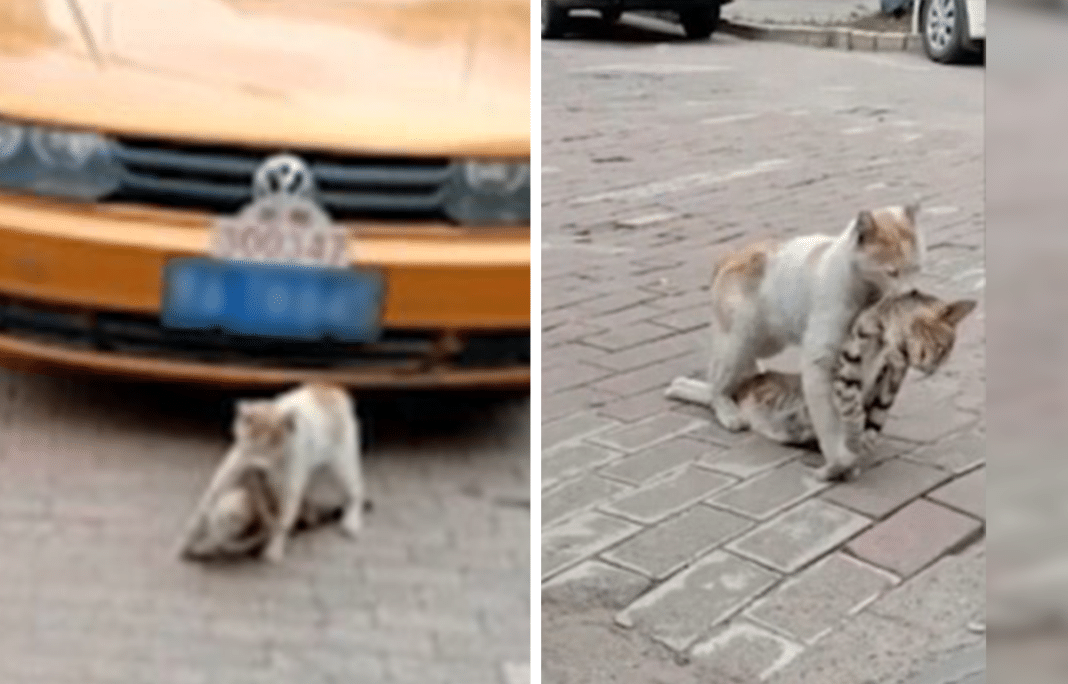 Dogs are world-renowned for their loyalty, but cats can also be fiercely loyal and caring for the ones they care for too. That’s what we see in this recent video of a white cat in China, which found a dead grey tabby cat companion in the street and used all of its strength to try to carry it to shelter.

The Daily Mail notes that the film originated in the Songbei district of Harbin, Heilongjiang Province on July 2. It isn’t known what killed the tabby.

The white and yellow cat appears upset as its tail twitches side to side. It tries to lift its spotted friend carefully by the scruff, as a mother cat would do with kittens.

Making multiple starts and stops, the cat moves slowly toward the shelter of a white car, sheltering the deceased feline.

It isn’t the first such video of a cat trying to revive a fallen friend.

The viral video below has reached over 1 million people, showing another white cat as it tries to wake up a fallen friend, kneading its fur with its paws. It’s a tear-jerker for sure, as it truly seems to show compassion for its friend.

The video was shared with the caption:

“Cats have feelings too.”

A more recent viral video shows an orange tabby cat named Big Boy reacting as it is presented with the lifeless body of its companion, Chuey. While it might seem cruel, the owners say they wanted Big Boy to realize that Chuey had passed away from jaw cancer so he wouldn’t endanger himself searching for her in the street.

Big Boy moves back and forth trying to revive Chuey, even though she wasn’t friendly with him in life.

“She actually hated him, and didn’t let him get close. This is the closest he ever got to her. The next day he was back to his normal, happy self. Such a heartbreaking moment!”