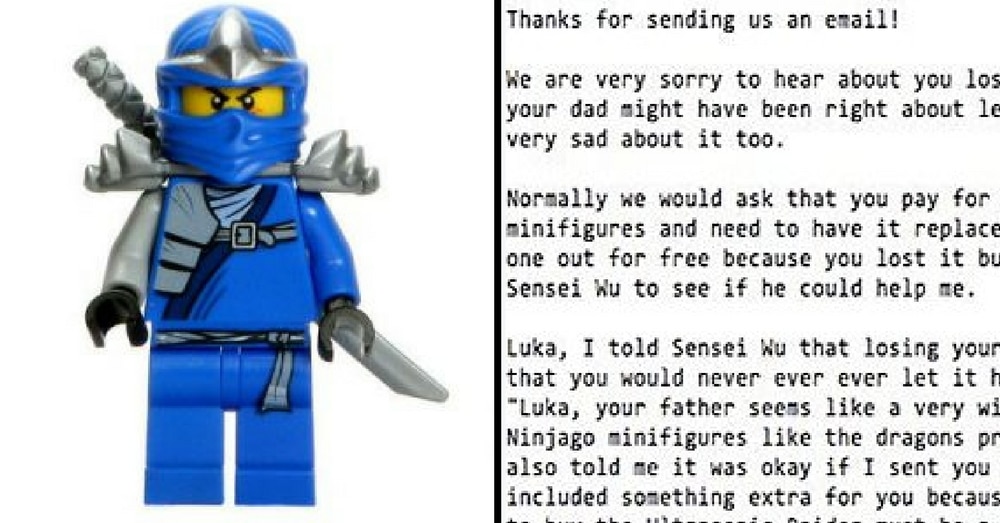 Usually dealings with customer service reps are enough to make us want to pull our hair out. It’s like these people are paid to not do their jobs!

But every once in a while a customer service representative will go above and beyond in their jobs, giving us all a little bit of hope that there is still some good in this world. Such was the case when 7-year-old Luka wrote to LEGO after losing one of his favorite action figures.

Luka had saved all of his Christmas money so he could buy a special LEGO kit he had his eye on. He was so excited to start playing with it!

When he and his dad went to the grocery store one day, his dad told him to leave his action figures at home, but Luka just couldn’t resist taking one of his favorites with him.

Unfortunately, it fell out of his pocket while he was shopping. When Luka realized the toy was missing he was devastated.

Instead of saying, “I told you so,” Luka’s dad suggested he write to the toy company to see if he could buy a replacement. Richard, the customer service rep who got Luka’s email, sent back a response that was so thoughtful and perfect for the 7-year-old boy that it is now going viral!

Boy writes to Lego after losing a mini-figure.

“Hello. My name is Luka and I am seven years old,” the little boy’s letter read. “With all my money I got for Christmas I bought the Ninjago kit of the Ultrasonic Raider. The number is 9449. It is really good. My Daddy just took me to Sainsburys and told me to leave the people at home but I took them and I lost Jay ZX at the shop as it fell out of my coat. I am really upset I have lost him. Daddy said to send you a email to see if you will send me another one. I promise I won’t take him to the shop again if you can. Thank you.”

Richard responded to the letter – with a little help from Ninjago’s Sensei Wu:

“Normally we would ask that you pay for a new one if you lose one of your minifigures and need to have it replaced. My bosses told me I could not send you one out for free because you lost it but, I decided that I would put a call into Sensei Wu to see if he could help me.

“Luka, I told Sensei Wu that losing your Jay minifigure was purely an accident and that you would never ever ever let it happen ever again. He told me to tell you, ‘Luka your father seems like a very wise man. You must always protect your Ninjago minifigures like the dragons protect the Weapons of Spinjitzu!’ Sensei Wu also told me it was ok if I sent you a new Jay and told me it would be okay if I included something extra for you because anyone that saves their Christmas money to buy the Ultrasonic Raider must be a really big Ninjago fan.

“I hope you enjoy your Jay minifigure with all his weapons. You will actually have the only Jay minifigure that combines 3 different Jays into one! I am also going to send you a bad guy for him to fight!”

Not only did Richard help make this little boy’s day, he helped teach Luka a lesson about responsibility that the young boy is sure not to forget soon!

Did you love LEGO’s response to Luka’s letter? So share this!