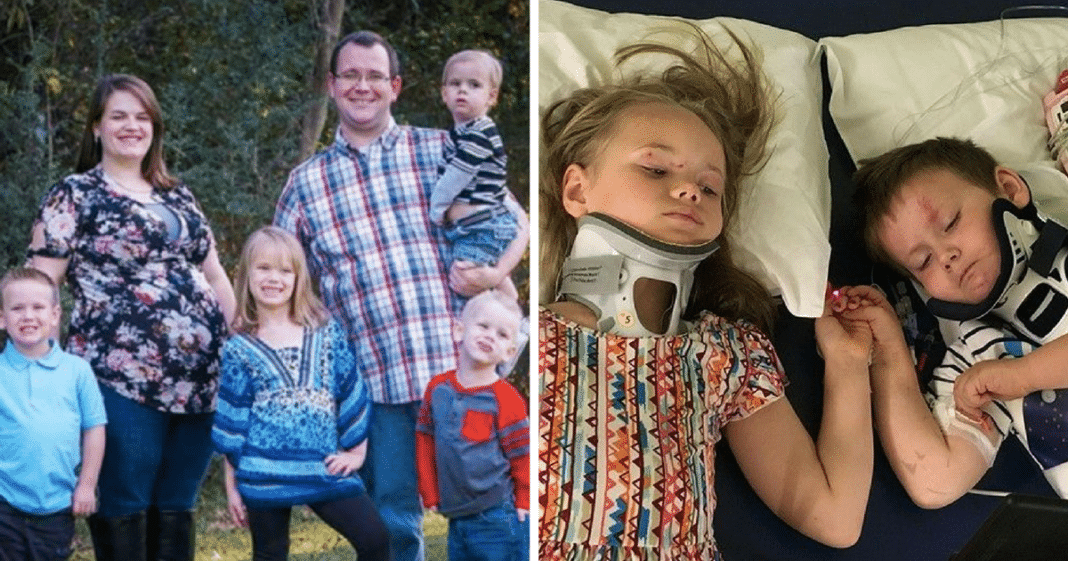 On April 7, 2018, a family from San Angelo would be changed forever. What started out as a trip to church for Jim and Karisa Clemens and their 5 children turned into tragedy in an instant. On the way home, a vehicle jumped the center median and veered into oncoming traffic on Highway 87 in Texas, crashing into their 2005 Chevrolet Suburban and taking the life of the two parents and their 7-week old baby, Juliana.

Four young children were left without parents and their youngest sister. 8-year-old Angela, 5-year-old Zachary, 4-year-old Wyatt, and 2-year-old Nicholas would face a long road to recovery, but they had each other.

After police arrived to deliver the horrible news of the loss of their son and family members, Colleen rushed to sign guardianship papers so the kids could be flown to the medical center. The children’s other grandmother, Susan Skillicorn came rushing to the children’s side at the hospital, along with more family and friends from all over.

Susan Skillicorn says she has been stunned by the kid’s miraculous recovery in the hospital, which she called an “incredible journey” of recovery. They visit each other in their hospital rooms, holding strong to each other for support, and they are starting to process what happened and what will happen when they all leave the hospital.

Wow. My sister Susan is the kids Ninny (granny) and she just finished a wonderful interview about the family.

“I am so looking forward to being a light in their future,” said Skillicorn.

Nicholas sustained only minor injuries and was soon released to his grandmother, Susan Skillicorn’s care.

Wyatt was left paralyzed on his left side after suffering a stroke but is working through it with ongoing physical therapy. He could be released from the hospital as early as next week.

“He actually is walking now,” his grandmother said.

Zachary and Angela seemed to have fared the worst. He broke his back, suffered major internal injuries, and has bruised lungs. She miraculously survived major brain trauma with a fractured skull and broken legs.

“Now she can actually read. She can read!” Skillicorn said. “And they say they’re amazed at the miracles that have happened.”

The family has been taken aback at how much love and support has come from friends and family. They are amazed at how the story has spread all over the country, and they believe everything will be ok in the end.

Skillicorn says it’s a reminder that we aren’t promised tomorrow. Love each other each and every day.

“I hope the message is love your little ones,” she said. “Take them and hug them because there is no guarantee for tomorrow. There is just no guarantee.”

Fundraisers on Facebook and a YouCaring page have been set up to help the family deal with the enormous health care costs and the funeral for the children’s parents and little sister.

See more about the children’s other grandmother, Colleen Clemons in the video from KIDY FOX San Angelo below:

On April 7, 2018, a San Angelo family was struck by tragedy, but with support from around the country, they have been able to remain strong. Yesterday, they sat down with our team here in San Angelo.

See Susan Skillicorn talk about the children below: