He Hears Strange Noise Coming From Hole, That’s When He Starts Digging 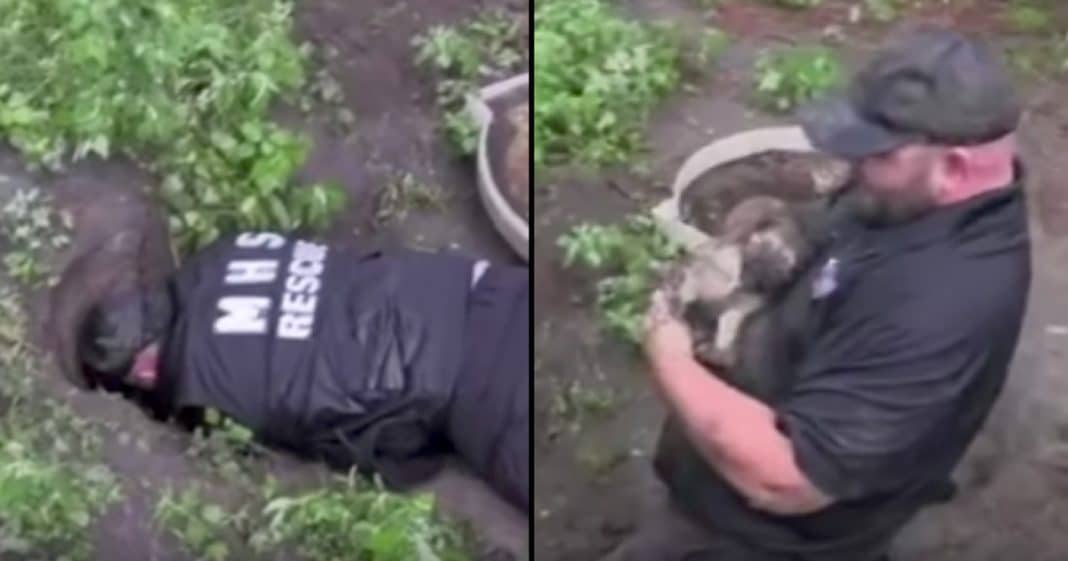 Strange sounds coming from a hole in his backyard prompted a Michigan man to go and investigate. Upon further inspection, he realized the sound he was hearing was the sound of puppies!

This prompted him to call the Michigan Humane Society to come and help. Much rain had been coming down and the puppies were at risk of being drowned in the hole if they weren’t safely evacuated.

Enter onto the scene Chris Ouwerkerk from the Michigan Humane Society, charged with the job of rescuing the pups. Dressed in his uniform – soon to be covered in a muddy mess – Ouwerkerk got right to the task of helping the puppies.

“You’re okay! You’re okay!” Ouwerkerk calmly assured one of the puppies as he gently reached in and pulled it out of the muddy environment.

As he held them safely in his arms, Ouwerkerk assured each puppy one by one before going in for another.

“I think I got you beat on the mud though. I’m muddier than you are,” he jokingly told one pup.

As he pulled another out, he reassured it in a high pitched voice as if talking to a newborn baby. “Hi. It’s your Uncle Chris,” he said. “Come on out and play.”

With flash flood warnings and more rain predicted in the area, Ouwerkerk said they knew they had to take quick action.

“We just didn’t want to take them without mom,” he said, “but with all the rain that was coming today, I mean, as you can tell, it was already wet and muddy down there and those guys are wet and muddy, so we didn’t want to leave them because if it does flood down there, then if they didn’t make it out then they wouldn’t survive. If they did make it out, then they didn’t have a home. Mom can only protect them so much.”

He added that the pups were in further danger because there are other stray dogs in the area.

Matthew Pepper, the CEO of the Michigan Humane Society, reports that the rescue was a “unique opportunity to show people what their support makes possible, and what we do every day.”

Were you happy to see these little puppies saved? So share this!