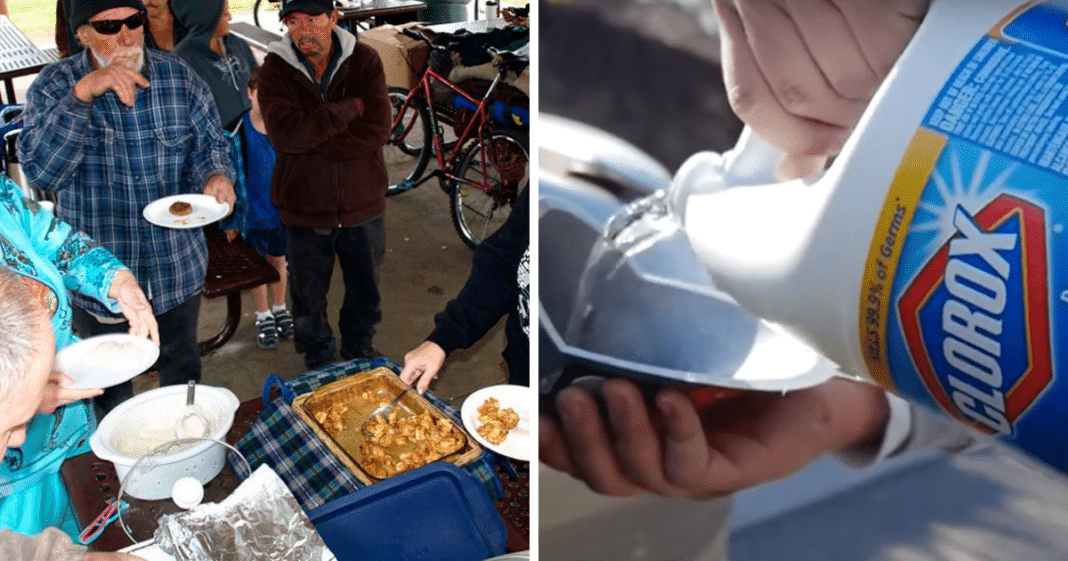 Sometimes the law seems to lose sight of common sense, the bigger picture, and the greater good. For example, one group of volunteers in Kansas City decided to help the less fortunate in their community. They prepared hot soup and food to give to the area homeless at public parks and had done so for three years. Then, on a Sunday, Kansas City Health Inspectors and officers showed up to their event, confiscating the food and pouring bleach on it to prevent anyone from eating it. Their reason: The volunteers didn’t have a permit.

In a video of what took place, an official is overheard telling the charity volunteers: (see the video below)

“No. We’re having a picnic with friends. That’s not illegal,” says the volunteer.

“You invited the public. It is illegal.” says the man.

“No, these are my friends,” she responds.

Nellie McCool, an organizer for operation Free Hot Soup KC, explained that the food was destroyed because the officials said the group had violated health code procedures by sharing food with the homeless.

Dr. Rex Archer, the Director for KCMO, claimed that he had warned the volunteers in September that they needed a permit and that the group had “outright said they would refuse to do that.” McCool denied she had ever heard from any government official.

Archer claimed that the way the food was prepared could have put those eating it at risk since it was transported in unheated vehicles in uninsulated containers. He claimed that a volunteer was angered when they were told not to serve the food, and they threw it at the inspector. McCool said the volunteer had thrown the food on the ground. Then the inspectors poured bleach on the food which was meant to feed starving people.

Archer said it was “standard procedure” and noted that the Health Department works with 43 groups that feed the homeless.

We support 43 groups that help feed the homeless in the safe manner that they deserve. Shame on you for not getting the facts before making accusations. https://t.co/sYOlw6CRPJ

The Blaze compared the actions by the Kansas City Health Department to the “Soup Nazi” from the 90’s show, Seinfeld.

“Health department officials used social media to find out the locations of Free Hot Soup KC’s events, which made it easy to coordinate their raids.”

Health department officials used social media to find out the locations of Free Hot Soup KC’s events, which made it easy to coordinate their raids. https://t.co/FpgEs2YBFt

“This is scaring all of us. We’re not an establishment. We’re not a not-for-profit. We’re just friends trying to help people on the side.”

Needless to say, the approach by the Health Department didn’t go over too well with the volunteers. McCool pledged to serve the homeless food again:

The group believes the city has no authority over their gatherings as they are feeding people they consider to be their friends as they would at a picnic event. They returned the following Sunday to serve food at Illus Davis Park, only this time they came with pre-packaged food rather than hot soup. The Health Department didn’t show up.

“A lot of non-healthy stuff,” said volunteer, Rachelle Burnett. “Nothing that really warms the belly, warms the soul. Not stuff we’re used to bringing, which is a little disheartening.”

Free Hot Soup enjoyed a drama-free weekend serving food to the homeless after making some changes after last weekend's flap with the KCMO Health Department. @catreidtv with the details: https://t.co/70Nj8VV2vF pic.twitter.com/os7lab6xqF

An attorney who volunteered to represent Hot Soup KC, Amy Bell is standing by the right to feed the homeless in the parks.

“It’s our right of freedom of association and freedom of speech,” Bell said. “And for many people here, it’s a freedom of religion issue … that their religion dictates that they come and share their food and help the needy,” she continued.

Meanwhile, Kansas City Mayor Sly James Tweeted about the incident after an uproar in the community. He claimed that the inspectors bleached the food after one group of volunteers threatened to remove it from the trash and use it anyway. The Health Department offered the Free Hot Soup group free permits and training.

(3) destroy the food or take it away and those three locations did that. (5) at the location in question, when the server was given the same options, they allegedly responded that if the food was thrown in the trash, they would get it out and serve it. Thus the beach.

According to the Mayor, it appears that the Health Department was alerted to the situation after neighbors had expressed concern about feeding the homeless at Winner Park.

See more from 41 Action News below: