He Hasn’t Seen Mom In 10 Years. His Reaction When She Surprises Him? Priceless 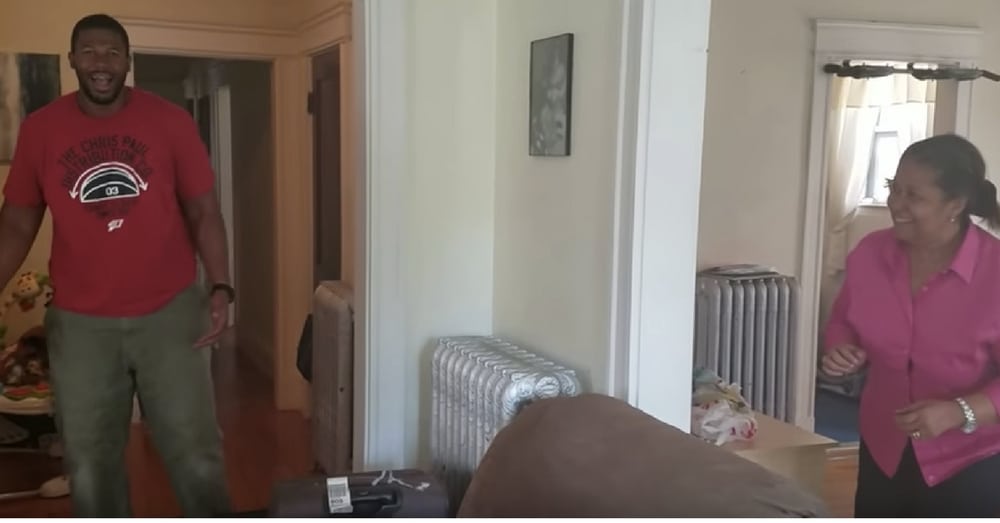 For most people, family is one of the most important things in their lives. We love our families and want to share life’s joys with them. Unfortunately that can be difficult when family doesn’t live close by.

Jeffrey Mayi knows this first hand. He was born in the United States and is now settled in Boston, but his family moved around a lot while he was growing up. His mother was a flight attendant and raised her kids between Paris, France and Libreville, Gabon. Jeffrey’s brother, Axel, lives in Florida, and Jeffrey hasn’t been able to see him in four years; and his mother, Madeline, lives in Gabon and, while they keep in touch through video and phone chats, the mother and son haven’t been together in 10 years.

When Jeffrey’s wife, Shannon, gave birth to their baby boy – the first grandchild – he wanted nothing more than to have him meet his family, but he knew that between money, distance, and visas that would be difficult to do.

Unbeknownst to him, though, Axel secured a visa for their mom and the two of them flew up to Boston to surprise Jeffrey.

Axel notified Shannon the day before they were to arrive so she could help them with the surprise.

When Jeffrey first walked through the door and saw Axel, he couldn’t believe his eyes! He was so overcome with joy at seeing his brother and their reunion was so special.

But the big surprise was waiting for him just around the corner. Click below to watch the moment Jeffrey sees his mom for the first time (you might want to grab some tissues first!):

“This video is the epitome of what an upstanding man he is,” Shannon wrote of Jeffrey. “He’s kind, loving, God fearing, patient, hardworking,and a loving father and family man. I’m grateful to God that he’s mine and I’m his.”

The family has since set up a GoFundMe account to raise money to bring Madeline to the U.S. for good so this special family can be together again.

Were you touched by Jeffrey’s sweet reaction to seeing his mom? So share this!