This Harvard Grad Just Gave The ‘Most Powerful, Heartfelt’ Speech You’ll Ever Hear 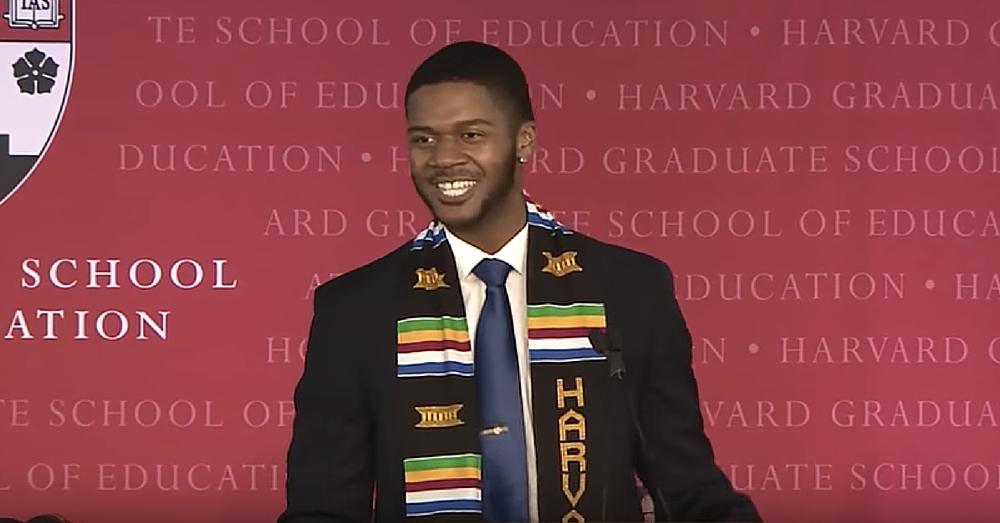 When Donovan Livingston, a master’s graduate at Harvard University, was chosen to speak at the School of Education’s convocation, he knew exactly what he wanted to do. Instead of giving a traditional speech, the graduate used spoken word to perform a poem he wrote called “Lift Off.” His address has since been called “the most powerful, heartfelt” speech “you will ever hear.”

Livingston had been asked to give the commencement remarks at his high school graduation, but when the teacher who was in charge found out he wanted to incorporate a poem into his speech, she “threatened to take me offstage or cut my microphone… She wanted it to be traditional. So I complied, but I really wanted to address my class in my most authentic voice.” When he was asked to give the address at Harvard, he knew it would be the perfect opportunity to say what he really wanted.

The poem spoke about inequalities in the education system, especially racial ones, and encouraged his fellow future teachers to really see and extract the potential in their students.

“As educators, rather than raising your voices / Over the rustling of our chains / Take them off. Un-cuff us,” he compelled.

He spoke about a teacher he had in junior high who recognized the potential in him and helped him to soar, and implored the other graduates to do the same.

“Today, when I look my students in the eyes, all I see are constellations.
If you take the time to connect the dots,
You can plot the true shape of their genius —
Shining in their darkest hour.”

“At the core, none of us were meant to be common / We were born to be comets,” he continued. “Together, we can inspire galaxies of greatness / For generations to come. / No, sky is not the limit. It is only the beginning ./ Lift off.”

Livingston’s speech has since been viewed millions of times and shared by the likes of Justin Timberlake and Hillary Clinton.

“I didn’t know it would be so well received,” he said. “Whenever you put yourself out there especially with poetry, you’re making yourself vulnerable. However it was received, I would’ve felt great at the end of the day because I was being myself, but the fact that it blew up the way it did is a humbling experience.”

Livingston, the son of a retired principal and a speech pathologist, has “always been around education, but I didn’t know it was something I was really passionate about until I got to college and looked around and saw … that everything I did catered to college access [and] college success. It felt natural. I’m just really happy to carry on the legacy of my mother and father and I’m just grateful to walk in their footsteps.”

Now that he has graduated, Livingston plans to start his PhD program at the University of North Carolina at Greensboro and hopes to become a faculty member or administrator at a university one day.

You can read his speech in full here.

Were you inspired by Livingston’s commencement address? So share this!