Guards Plan To Marry On Beach, Then Irma Hits. What They Do Instead Will Melt Your Heart 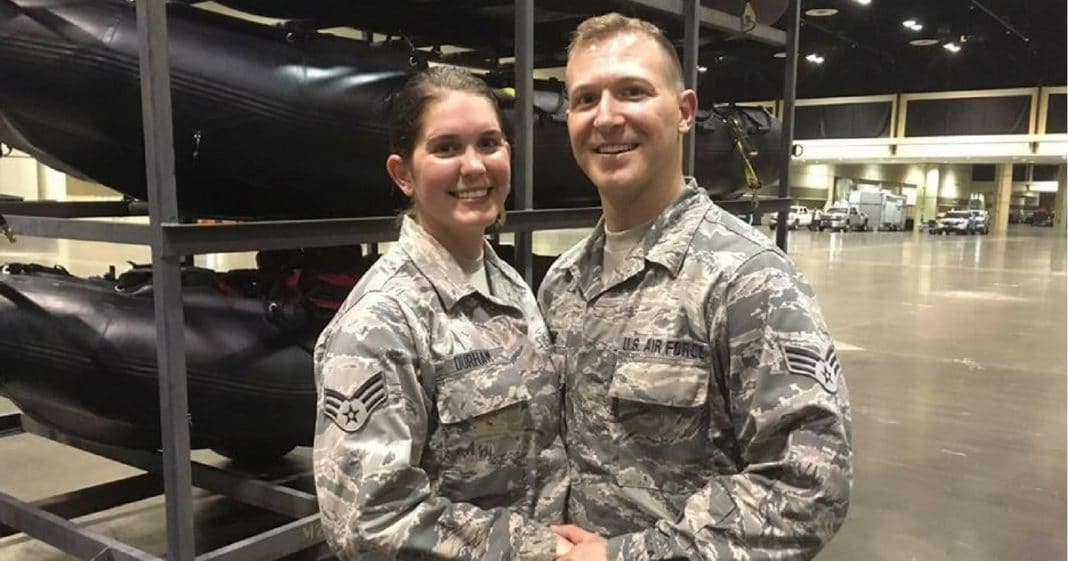 When natural disasters happen, our National Guards are some of the first people on the scene, ready to serve and assist in whatever ways they are needed. They put their own lives on hold to make sure others are safe.

But for two senior airmen with the Air National Guards, they were putting a really big part of their lives on hold – their wedding.

Lauren Durham, 24, and Michael Davis, 26, had planned to get married on September 16, 2017, on the beach in Jacksonville Beach, Florida, but when Hurricane Irma hit they both got called to duty. They were deployed indefinitely so they had to tell their out-of-town guests that they would probably miss their own wedding.

As they were eating breakfast with some friends on Sunday morning, one of them asked the couple why they didn’t just get married in the middle of the storm. The couple laughed it off at first, but then the idea started to grow on them.

“It started out as a joke, and it just kind of unfolded,” Michael said. “And it turned out to be really great.”

Instead of a white dress and a tux, the pair wore their fatigues to get married in a hangar filled with rescue vehicles and paramedics. The couple’s best friend in the Guard, who is a notary, officiated the ceremony.

A sweet photo of the newly-married Guardsmen has quickly gone viral. Many people have written notes of congratulations and thanks to the happy couple.

“When you truly love someone, it doesn’t matter where you get married – all that matters is the love you share,” wrote Tina Walker Rambo. “God bless this couple as they start their journey together as one. Thank you both for your service!”

“The wedding setup is in no way an indication of how strong a relationship is, or how healthy the marriage would be,” Petya Pucci agreed, “it’s all about the love and the values you share as a couple, and the hardships you go through together. Thank you for your service, Mr. and Mrs. Davis and congratulations on your wedding! May your marriage be always hurricane-free!”

When asked why they didn’t try to beg off duty for their big day, the couple said the thought never crossed their minds.

“Service before self,” Michael said.

We are so thankful for Lauren, Michael, and the other hardworking men and women who are sacrificing their own needs and wants to help and serve others! They are true heroes!

Are you thankful for these Guardsmen who are putting their own lives on hold to help keep others safe? So share this!