Groom Turns Back On Bride During Dance. When He Turns Around She Can’t Believe Her Eyes 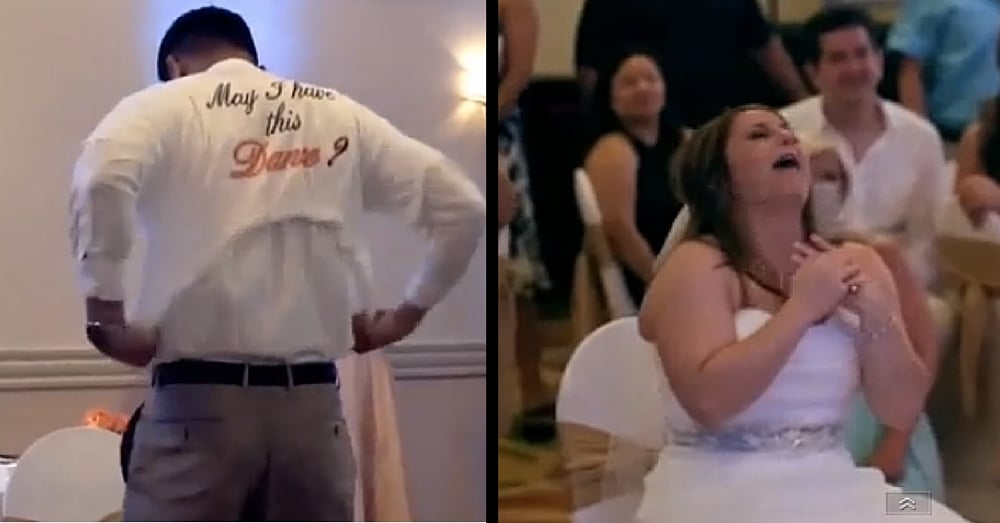 Shannon was a big romantic, but she didn’t know if she would ever find her Prince Charming.

She was “always a bridesmaid, never a bride,” until at last she met the man of her dreams – Don.

Shannon and Don fell madly in love with each other, and Don’s two sons, Tommy and Joey, meant that Shannon had an instant family with them. She couldn’t wait to marry Don and live out their “happily ever after.”

One of the things Shannon most looked forward to on her wedding day was the father-daughter dance. Sadly, though, her dad was diagnosed with cancer, and he died just one month later.

On their wedding day, Don decided that he wanted to do something special for his bride who, although she was excited to be married, was heartbroken that her dad could not be there with her.

As the couple finished their first dance together, Don’s sons came over and helped Shannon to a chair on the side of the dance floor. The father and sons then performed a choreographed dance for her that had her both laughing and in tears.

But the really special part of the dance came after. Don turned his back to his bride and put on a t-shirt which read, “May I have this dance?” When he turned around, Shannon couldn’t believe her eyes. She was instantly in tears.

Click below to see the special surprise Don planned for his bride!

On the front of the shirt was a picture of Shannon’s dad. Though she didn’t get to actually have a dance with her father, it is clear Shannon has someone there for her now who will love and support her and be there for her forever. The moment was one she will truly never forget.

Were you touched by this special dance Don planned for his bride? So share this!