Groom Paralyzed At Bachelor Party. 9 Months Later Does The Unimaginable 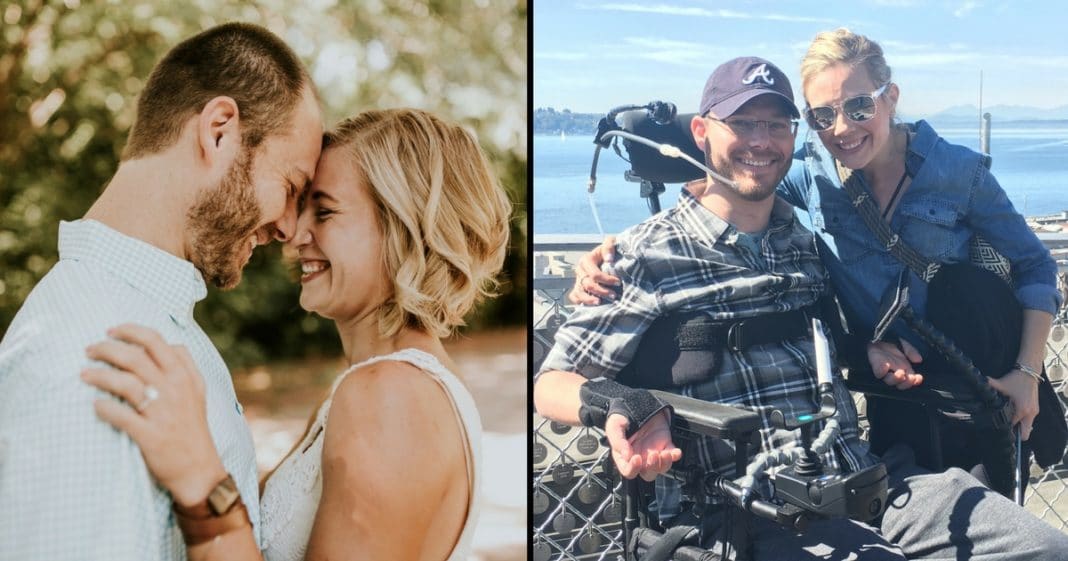 When most couples say their wedding vows – “for better, for worse, in sickness and in health” – they have no idea what they are really committing to. There’s no way of knowing what the future will bring. Maybe it will be smooth sailing, or maybe there will be some serious challenges that come along the way. The point of the vows is that, even if things seem great now, they will stay by each other’s sides when the worst comes.

Meg Alexander hadn’t made those vows yet, but she got the chance to prove just how serious she was about them when the unimaginable happened to her fiancé, Brett Greenhill.

The couple planned a joint bachelor/bachelorette party in Naples, Florida, last December so they could spend time and make memories with their friends and family before tying the knot in February. Brett was playing football on the beach with some of the group when he decided to go for a swim.

“Brett went into the water and all of a sudden my friend Kelsey says, ‘Why is Brett doing that? Why is he floating like that?’” Meg recalled. “I was like, ‘I don’t know, he’s a goofball,’ and she went to check on him.”

Just moments later, Meg heard screams coming from the water. She looked up to see her friend working to stabilize Brett’s neck as her mom called 911.

“I love you,” she assured him. “Don’t be sorry. We’re going to figure out what’s wrong with you.”

Brett was airlifted to Lee Memorial Hospital in Fort Myers, Florida, where they learned he had been paralyzed from the neck down. They still don’t know quite what happened but believe he may have hit his head on a sandbar when he dove into the water.

Meg knew life was about to get tough, but she refused to leave the side of the man she loved.

“When accidents happen you can’t control that,” she said. “It’s just a thing in life and it happens. What you can control is the way you treat people and your mindset. Those are the things we try and focus on — being good to each other and being good to others.”

As time passed, Brett began to make huge strides. He even regained some arm strength and wrist movement.

“Every spinal cord injury is like a snowflake,” Meg explained. “Some people walk again and others never get off a ventilator.”

“It’s been a roller coaster,” Brett said. “There have been a lot of good days and a lot of bad days. It’s been an adventure, but people keep reminding me that this is just the beginning of a long-term journey.”

Brett, an accountant, says he plans to go back to work eventually. “It was a catastrophic experience, but we’ve come a long, long way.”

While the original February wedding didn’t happen as planned, Meg and Brett still wanted to get married. Despite knowing the challenges that lie ahead, on September 9, in front of 100 of their closest friends and family members, Meg and Brett vowed to love each other for better or for worse, till death do they part.

“When you set a goal, sometimes it takes a little longer to get there than you anticipated, but if you work hard together you can make it happen,” Meg said. “They say for better for worse, for richer for poorer — and I guess we got that out of the way early.”

“It was the most exciting and special day,” she added. “Especially after everything that’s happened. There wasn’t a dry eye in the house.”

While their future now looks much different than the one they first imagined for themselves, that doesn’t mean they’ve stopped dreaming. Brett’s next big goal is to move from a power wheelchair to a manual one so he can have more independence, and the couple hopes to expand their family soon.

“We’d love to start a family in the next two years and build a home that will be easier for us to live in,” Meg said.

“Everything changed,” Brett added, “but we’re still just as determined to live the life we wanted for ourselves.”

Life does get challenging, but the couple attributes their faith and their love for each other with getting them through the hard times. On the website for a foundation set up to help the couple with Brett’s medical bills they wrote, “The only love stronger then Meg and Brett’s love for each other, is their love for God, and commitment to a faith that will give them the strength to continue. Regardless of this circumstance the couple is determined to push through, with God by their side.”

Despite the challenges, Meg and Brett are loving the life they have together and are looking forward to their future.

“It looks different than we thought it would, but who actually ever thinks life is going to turn out the way they think it is?” Meg said.

“We have twists and turns and ups and downs coming our way, but we’re excited,” Brett agreed. “We’re in this together.”

Were you touched by this couple’s incredible love story as much as we were? So share this!