Groom Nervously Waits For Bride To Walk Down Aisle, But Wait Till You See Who Comes Out First 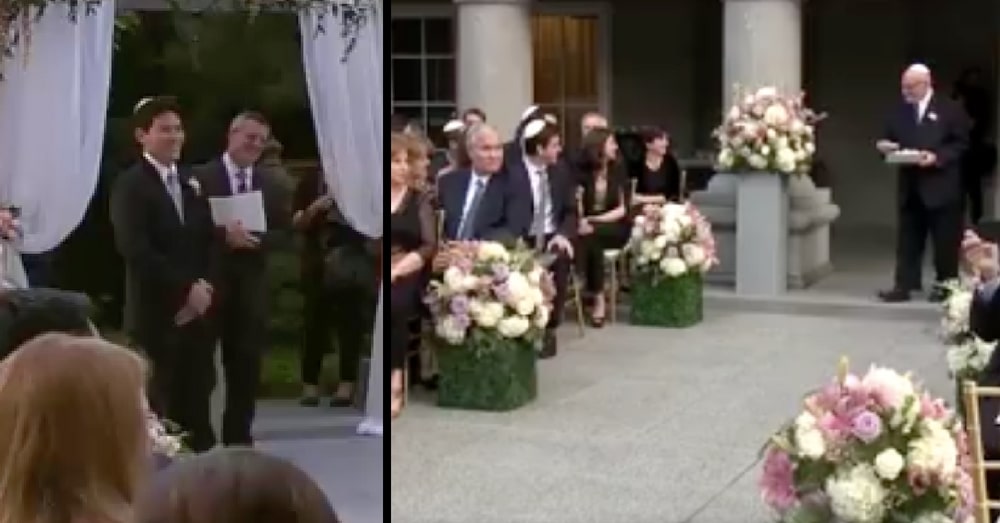 Jennifer Briskin has always had a special relationship with her grandfather, Stanley, so when her fiancé asked her to marry him she knew she wanted her “Papa” to play a special role in her big day.

At first she started joking about him being her “flower grandpa,” but as time went on the idea began to grow on her.

Seven months before the wedding Jennifer gave Stanley an embroidered handkerchief that read, “Papa, Will you be my Flower Grandpa?”

He immediately said yes, but a few months later he didn’t seem to remember that he had accepted the special role, so she asked him again.

“He was so excited, he had a very happy reaction.”

While Stanley was excited, Jennifer’s grandmother wasn’t too happy about it at first.

“She was worried I was going to make him dress like a flower girl,” Jennifer said, “so we had to convince her and he wanted to get her permission.”

Stanley was a little nervous as he prepared for his big role, so he would practice walking down the driveway with Jennifer’s sister.

All that practice paid off when Stanley walked down the aisle before Jennifer on her wedding day, giving all of her guests a memory that they will cherish forever.

“I could kind of see through the doorway when he walked out,” she said. “He started throwing petals on top of my guests instead of on the aisle. I think between the adrenaline and excitement, he got a little confused.”

But the guests loved it, commenting on how funny, special, and memorable it was.

“We had guests come up to us the rest of the night, telling us how memorable it was,” Jennifer said. “People joked he could do this as a side gig.”

A video of Stanley’s big moment has since gone viral, and he is loving every minute of it!

“He tells me when I call that I have to speak with his agent,” Jennifer said.

She added that she is happy to see him getting all of this attention, because he deserves it. She describes him as a kind, caring, and generous man who spends much of his time helping the less fortunate in his Atlanta community.

“He doesn’t like being recognized for charity work and always remains anonymous,” Jennifer said, “so I think it’s nice I can put him in the spotlight for a minute for something that is so special because his seven grandchildren are such an important part of his life.”

Did you love this video and Stanley’s special role as much as we did? So share this!