Grandma Struggles To Raise Triplets, Then She Finds The Note From A Stranger 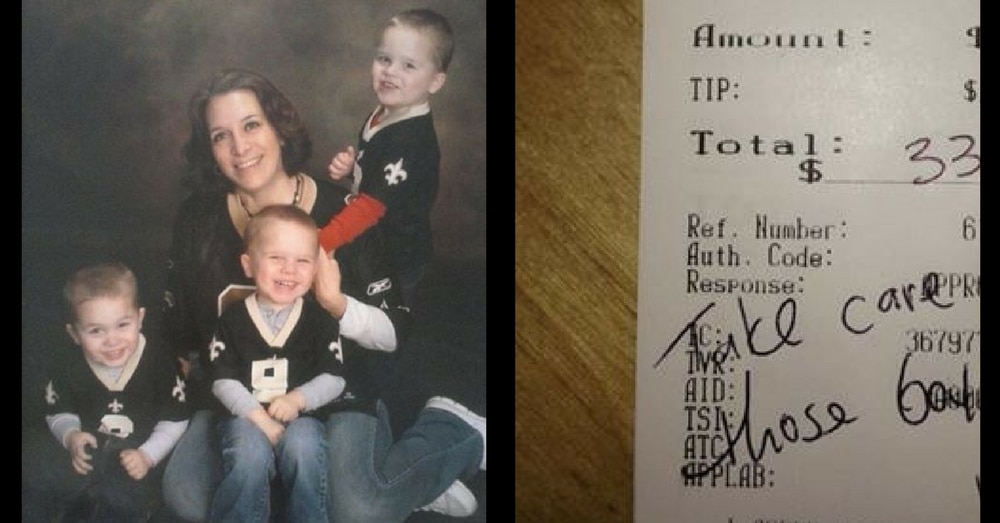 Raising triplets wouldn’t be easy for anyone, but imagine trying to do it as a grandmother… by yourself! That is the situation Shiela Weisberger found herself in.

Shiela’s daughter was already struggling to take care of her toddler when she found out she was pregnant with triplets. She knew she wouldn’t be able to handle raising them too, so Shiela took the boys in to raise them as her own.

It definitely hasn’t always been easy, but Shiela loves those boys fiercely and is so proud of them. She works as a bartender at First and Last Chance Bar in North Dakota and loves to brag on her boys to the different patrons who come in.

One evening she was talking about the boys with some of her regulars when another couple at the bar overheard. They couldn’t believe Shiela had taken on such a huge responsibility as a grandmother all on her own.

A short time later the couple paid their bar tab with a credit card and left the bill on the table. They told Shiela to have a good night and then left the bar.

Shiela grabbed the slip to put it in the till, but when she saw what the couple had written on it she couldn’t believe her eyes.

“I couldn’t believe it!” Shiela wrote after posting a picture of the shocking slip on Facebook. “I had to go to the bathroom and cry for a few minutes….You only read about things like this happening…So grateful!”

Were you touched by what this couple did for Shiela and her boys? So share this!