Grandma Runs Over 2-Year-Old With Car, Then Cops Start Praying For A Miracle 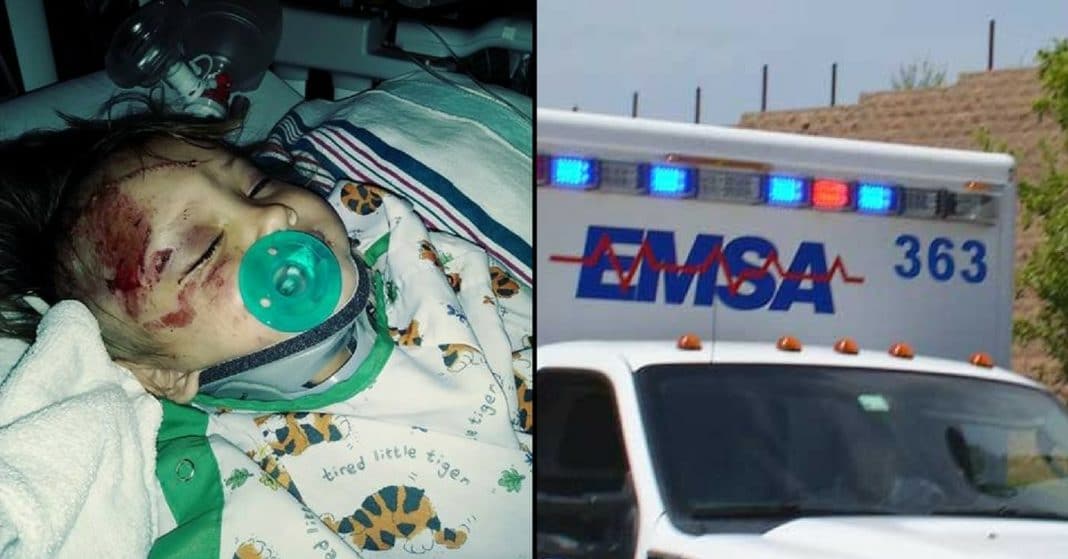 One family’s holiday came crashing to a halt after a horrible and terrifying accident occurred.

After the family’s Thanksgiving party, 2-year-old Merida Gibson was playing in the driveway, right in front of her grandmother’s SUV. Unfortunately, Joan Conley did not see her granddaughter when she got in her car, so when she started to pull out, her vehicle ran over young Merida.

Thankfully, the hit was not fatal, but there was severe trauma to the top half of the little girl’s body. She had to be airlifted to the hospital.

As the helicopter left, the police officers began to pray with the frightened family, bringing some peace in the midst of a horrible situation.

Merida was airlifted to OU Medical Center where the police and the little girl’s relatives gathered.

“The family, filled with grief, still came to each one of us and thanked us for being the ones that responded for their granddaughter,” a statement from the Stillwater Police Department said.

The statement also mentioned that Merida’s family stopped by the police station to bring food for the officers who were not able to spend the holiday with their families.

“We gave thanks to GOD that we were the ones that got to help with this little girl,” they wrote.

Merida and her family are originally from Mexico and were just in town for the holiday weekend. They have set up a GoFundMe page to help raise money for medical expenses and to get Merida’s father into the country so he can be by her side.

“First and foremost, Merida needs her daddy with her,” the page states, “He’s currently in southern Mexico, where he’s a resident and citizen, and has been unable to find a way to reach any official who can help.”

Sadly, Merida’s father was banned from the United States for 10 years after being deported, but the family is trying their best to lobby officials to permit his entrance into the country for support.

Due to the severity of Merida’s damage, she will very likely need extreme medical attention and rehabilitation. Having her father there to love her through the process is important to the family.

“We don’t know if there’s a chance she might not recover,” one family member said. “And it would just be better for her to have him here so she could hear him when she wakes up and see him, that would help her recover more I think.”

Though she has an extensive recovery ahead of her, Merida has been making progress. She cannot speak, but she has moved her head and she has been able to respond to some questions.

“The fact that she can open her eye and at least nod an answer to questions is amazing,” Merida’s aunt, Brandy Gibson, said.

Thankfully, Merida’s MRI did not reveal any brain or nerve damage, which makes a full recovery a definite and expected possibility.

We are praying for complete healing and restoration for little Merida, and peace and comfort for the family. Thank you, God, for keeping Merida alive and moving in a positive direction!

Will you join us in praying for this sweet little girl’s recovery? So share this!