Graduate Gets Nervous When They Skip His Name, But Then He Turns Around And Sees Why 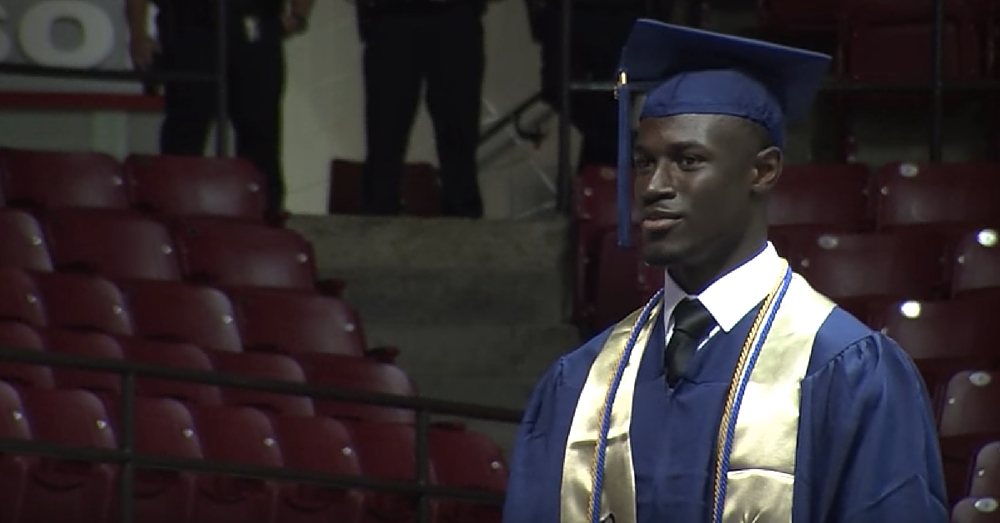 For Steven Turner, Jr., his graduation was the culmination of a lot of hard work. “He used to play a lot in school, and I asked him why he was satisfied with Cs,” Steven’s mom said. “But he got in high school and made the honor roll. He told me that it felt good, being honored. I told him he could keep doing that.”

Steven knew he had made his mom proud and was excited to walk across the stage and graduate, but the moment was bittersweet. You see, his mom, U.S. Petty Officer 2nd Class Vera Turner, was deployed in Guantanamo Bay, Cuba, and was not going to be there to see Steven graduate.

The big day finally arrived, but at the ceremony, Steven was pulled from the line of graduates waiting to cross the stage to receive their diplomas. He began to get nervous, thinking perhaps something had happened that would keep him from graduating. Adding to his nervousness, when he finally started to walk across the stage, the superintendent and principal stepped away from him instead of shaking his hand.

Confused, Steven started to look around, and that’s when he saw her. Climbing up the stairs at the other end of the stage was his mom!

Unbeknownst to any of her family, including her husband, Vera had started planning this surprise about a month earlier, and school officials were more than happy to help her pull it off. “I was bursting, overjoyed with feeling,” she said of waiting to surprise Steven. “This is a moment I’d been waiting for. The anticipation of him seeing me was just overwhelming.”

And that moment is one Steven will never forget. “It means so much to me, the whole world,” he said. “It was a big finale, I loved it.”

Were you touched by this emotional reunion? So share this!