She Grabs Mic In Grocery Store And Starts To Sing. 3 Minutes Later Performance Is Going Viral 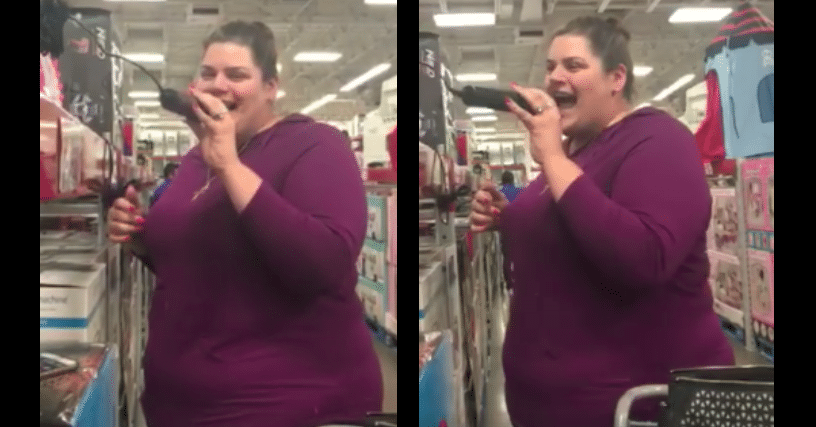 Usually when you’re walking around a store there is some kind of music playing in the background. Sometimes it’s “elevator” music that you mostly tune out; other times the store is playing familiar pop songs or maybe even holiday music.

I’d guess most people don’t pay that much attention to the music that is being played over the speakers, but some shoppers who ventured out to Sam’s Club in New York recently were treated to a special musical performance that they couldn’t ignore!

Christina Kokonis-Viggers is a singer from Staten Island who has gained internet fame recently after a video of her singing at Sam’s Club went viral.

Kokonis-Viggers, who is known by friends as Stina Marie, was shopping with her best friend Amanda Lasher when they saw a karaoke machine on display and decided to have some fun.

The singer picked up the microphone, turned up the volume, and began to belt out “Maybe This Time” from the 1972 musical Cabaret.

Kokonis-Viggers says this moment was very out of character for her – she usually saves her singing for the stage – but it seems to have paid off. In just a few days, Amanda’s video of the spontaneous performance had millions of views and Kokonis-Viggers was getting calls from news sites and radio stations.

“My friend posted it that night when we were leaving the store, and she said, ‘Christina, you know this is going to go somewhere,’” Kokonis-Viggers recalled. “I said, ‘No, it’s really not.’

“So after I shared it on my Facebook, we were just sitting there, watching TV. We both looked at our phones and went, ‘Oh, my God. It’s already at 2,000 tonight!’”

The 32-year-old singer says she has been overwhelmed by the response her video has received.

“The other thing is putting a smile on somebody’s face. I’ve gotten so many messages where someone has said, ‘I just got out of my chemo treatment,’ and I want to cry with them, but then they’re like, ‘Thank you for putting a smile on my face.’

“I had one woman message me and said, ‘My son passed away two years ago, and I came across your video, and I just started smiling.’ How do you respond to that other than to say, ‘I’m so glad that I could at least spread some sunshine your way.’”

Right now, Kokonis-Viggers works as a senior consumer fund specialist at the Middletown-based Access: Supports for Living where she safeguards the funds of the developmentally disabled. She also serves as president of Upstage Productions, a musical theater in Hudson.

For now, she’s just waiting to see what happens, but she said she would love it if she could make a full-time career out of her music, even though she would miss the people she works with now.

“I’m sure that they are aware that if something does happen and it takes off from this that I will be pursuing that with their full support,” she said.

Kokonis-Viggers says she has no classical training – “Most of what you guys got to see is just hard work and practice” – but loves to challenge herself with classic tunes.

“I love to challenge myself with the old greats like Etta James and Sharon Jones, so I love to get into that big, brass-type music,” she said.

Only time will tell if this was the launching point for Kokonis-Viggers’ big musical career, but for now, she’s just enjoying the ride and trying to stay grounded.

“I would love to one day be up there with the greats like Adele and going to the Grammys, but if just the simplest thing happens where I could have a career in singing and pay my everyday bills, that’s what I’d love to do,” she said.

“My biggest thing is to make sure I stay the same and that I’m still goofy and laugh-in-your-face. Regardless of where it goes–whether it’s just a viral video and I get a couple of branches out or I actually make it big – I want to make sure I remain a regular human being.”

Did you love watching this video as much as we did? So share this!