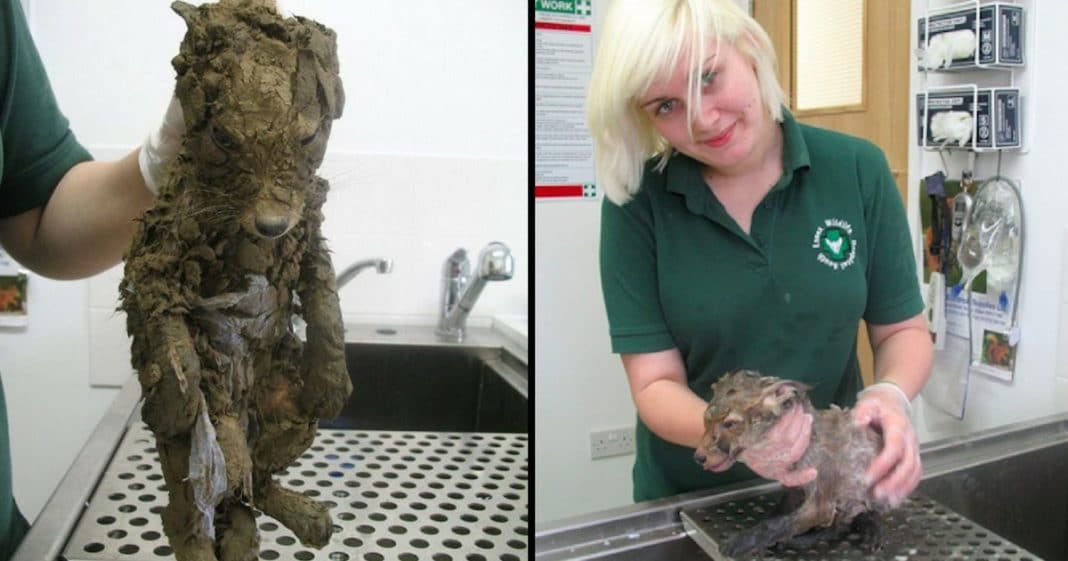 Have you ever seen a person caked in mud so badly that you hardly recognize them anymore? If you’ve ever witnessed a game of tug o’ war with the losing team falling in the center mud hole, you probably couldn’t even pick out the people you knew before the game began. Maybe your own kids come home after a summer day of play looking unrecognizable before their baths.

This is similar to what happened when rescuers thought they had found a puppy who had fallen into an uncovered construction hole. The animal was completely covered in dried up mud after spending possibly the whole weekend in the hole.

When the British construction workers returned to work on Monday, they discovered the muddy creature and took him to South Essex Animal Hospital. Workers at the hospital gave the frightened animal a bath, and only then did they discover the shocking truth about his identity.

The muddy pup was actually no pup at all, but instead a wild fox!

“We felt very sorry for him because he was completely caked and was absolutely petrified,” said Su Shar, the director of the hospital. “The builders were doing some groundwork on the site and there were a couple of holes left open. None of us knew how long he had been down that hole – it could have been all weekend.”

The fox, who was nicknamed “Muddsey,” will be rehabilitated and then released back into the wild with other foxes who were rescued around the same time as this unfortunate fellow.

Thanks to the construction workers who found him and the kind people at the South Essex Animal Hospital who cleaned him up, Muddsey now has a second chance at a normal life – hopefully without falling into anymore holes!

Were you amazed to see Muddsey’s true identity? So share this!