G’ma Walks Through Home Depot To Find Gift For Autistic Grandson, Surprise From Employees Leaves Her In Tears 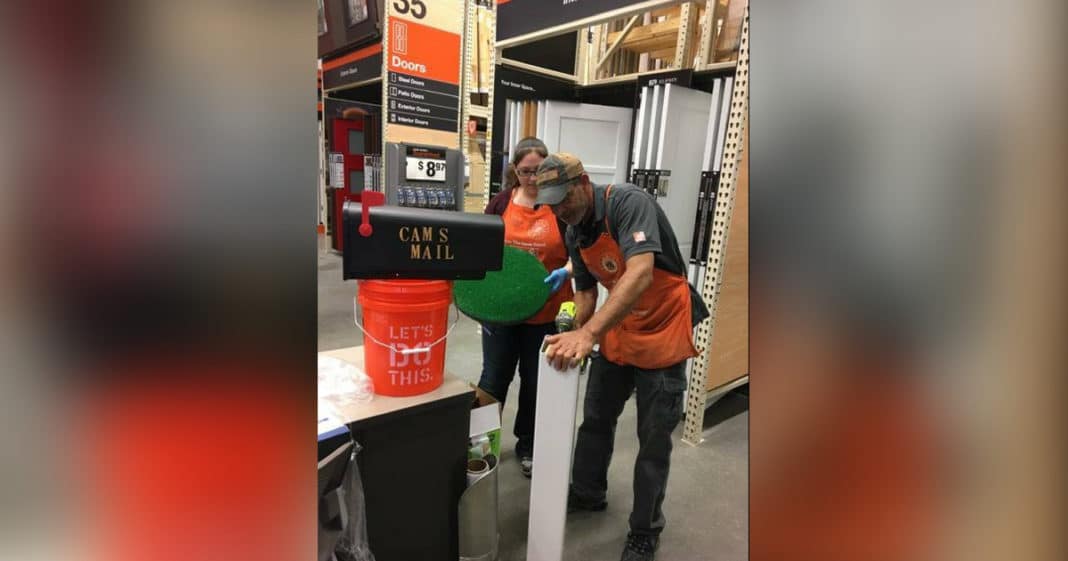 Grandmother Denise Haight has a 7-year-old grandson named Cameron. He’s autistic. While at her Home Depot store in Gaylord, Michigan, Denise pondered what to do for his birthday.

Cameron loves mailboxes. The loving grandma wrote in a Facebook post, “He loves to put things in, take them out, open the door, close the door, raise the flag, lower the flag over and over (not necessarily in that order!)”

Denise had an idea, but she wasn’t sure how to make it a reality. She wanted to gift Cameron with his very own mailbox. One he could take from room-to-room and be sturdy enough for him to play with.

She said, “I had an idea of what I was trying to construct — I had gone in to get parts and pieces and try to create something. But I think they looked at me and thought, ‘she looks like she’s confused.’”

She shared her idea with store employees. Gary Malak, the store Manager, told Denise to trust him and to return the next Saturday.

She agreed. And when she returned to the store, Denise couldn’t believe what the fine employees had done for a child they didn’t even know. They created and built the most perfect mailbox for precious Cameron. Denise was brought to tears when she saw the gift.

She wanted to know the cost of the custom-made toy. It was free! “Tell that little boy Happy Birthday from Home Depot,” the Manager said.

Denise later said, “I must have looked like an idiot pushing the cart through the check out crying like a baby!”

The folks at Home Depot didn’t just build an awesome mailbox. They also included cool other prizes inside: a teddy bear, other small toys, and a Home Depot apron.

Denise’s Facebook post has gone viral. In it, she thanked the folks at Home Depot. “Thank you so much to Gary & Lorel as well as Gene, Laura, and Don who built the mailbox!”

The company didn’t release an official statement, but a representative from the company said they, “love to hear these stories.”

Cameron loves his gift, Denise said. she said about “the look on his face (when he first saw it) was just amazing.”

People are so taken with little Cameron, they have asked for an address to send him mail. “Never in a million years do you think that something like that will come your way,” said Haight of the love shown to them since.

Thanks to the great folks at Home Depot for their creativity and kindness. You made a little boy’s birthday and touched thousands of hearts with your good deed.