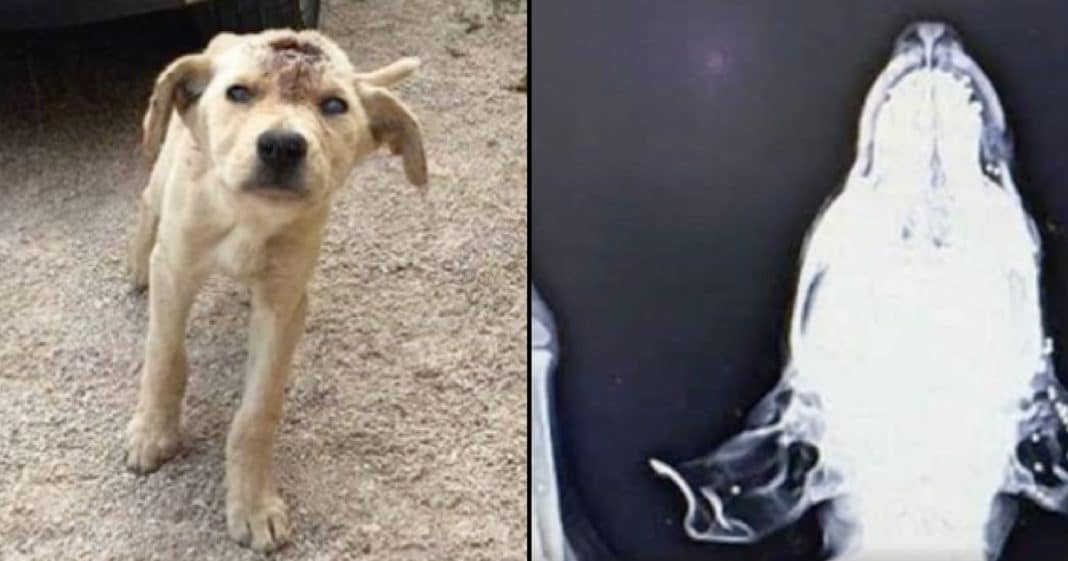 It’s hard to understand how anyone could treat a poor, innocent animal with any sort of cruelty and malice. What evil must be in a person’s heart to make them behave in such a heinous way?

Sadly, we see abuse and neglect all too often and it breaks our hearts. Thankfully, though, there are many heroes around the world who will step in to help in even the most hopeless situations.

Such was the case when Amal Andari and her friend were driving to Beirut, Lebanon. They happened to pass a little puppy who looked lost, so they decided to pull over and give her some water.

That’s when they noticed something that left them both sick – the sweet puppy had a gaping hole in the middle of her forehead.

Amal called out to the puppy and, though she seemed fearful, she slowly made her way over to the women. “She was wagging her tail,” Amal recalled. Surely the poor pup could sense these women meant her no harm.

As they gave the dog some water, they asked a local man what had happened. He said he didn’t know – perhaps another dog had attacked her.

That story seemed fishy to Amal – the puppy’s wounds didn’t look like they had been inflicted by another dog. She decided to take the forlorn creature to the vet to have her checked out.

It was there they learned the horrifying truth: X-rays came back showing dozens of pellets littering the tiny dog’s body. Someone had obviously shot her repeatedly and then left her to suffer and die.

This stray puppy was shot dozens of times — but he wouldn’t give up on life ? https://t.co/LB5jvfnhoW pic.twitter.com/gdpiEPobzW

The vet told them one of the pellets had hit the dog’s eye and she was partially blind. She also had a serious case of parvovirus, which can be fatal for dogs if left untreated. The vet only gave her a 25 percent chance of survival.

But survive she did. Despite the abuse she had sustained, the puppy, whom Amal named Bondok, still showed love to the humans who were helping her.

The vet had decided not to remove the pellets as the procedure could cause more harm than good. He put Bondok on antibiotics and cleaned her wounds.

Amazingly, after being shown such love and care, Bondok began to recover and then to thrive.

“She has an appetite for life,” Amal said, “she wanted to live.”

Bondok is now living with Amal’s friend who is fostering her. They say she is a cheerful and very active little puppy who won’t leave the other dogs alone. What a beautiful trait for a dog who was once abused and left to die!

Bondok is still looking for her forever home. If you would like to bring this precious puppy home or contribute to her vet bills, you can contact Animals Lebanon.

Are you happy to see Bondok healthy and thriving after suffering such terrible abuse? So share this!