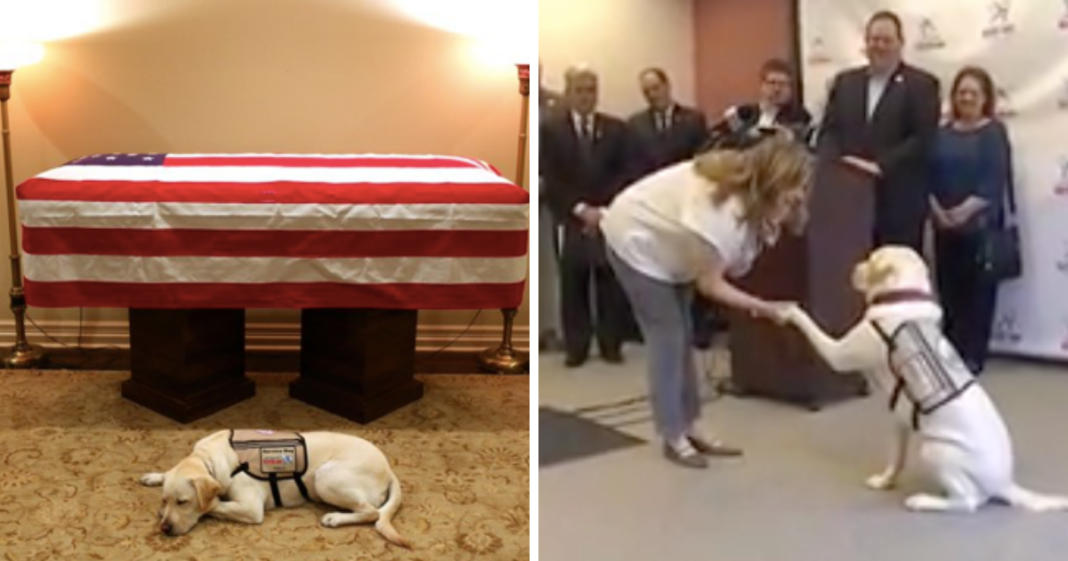 Sully, the service dog of later Pres. George H.W. Bush, served his president well. And he served him right up until the end. Sully’s incredible service to the late president went viral when Bush staffer Jim McGrath shared this photo on Twitter with the caption:

George H.W. Bush's service dog Sully sits quietly by the former president's side in the U.S. Capitol. Sully will stay with the family at least through funeral services at the National Cathedral on Wednesday, before becoming a service dog at Walter Reed. https://t.co/98Xkmxqw1b pic.twitter.com/TZuyctYUTv

As per the wishes of Pres. Bush, Sully has a new sacred mission: serving veterans who have lost limbs.

After further training, Sully H.W. Bush (the Dog) will be bound for @WRBethesda to continue his service to America's military families. Thank God for @AmericasVetDogs and related causes that help our bravest and most selfless families. God bless all who serve, and #Remembering41 https://t.co/9zS13XgOcy

But before he starts his new mission, he’ll have a brief break with family. Watch his heroes welcome as he arrives home after the president’s funeral activities.

After his visit home, Sully will go to the Walter Reed National Military Medical Center’s Facilities Dog Program in Maryland, the same center who recommended Sully as a good match for Pres. Bush when he was two years old.

Sully will be working with wounded soldiers and active duty personnel as they undergo therapy at the Center. Sully’s specific duties will involve working with soldiers with amputated limbs. From People:

Through retrieval, bracing, and innovative tug-of-war exercises, these dogs work with service members as they adapt and work with their new prosthetic limbs.

Sully is well suited for his new position. At 15 months old, he was taken to the VetDogs prison puppy program, where inmates taught him service dog training. He honed his skills at the VetDogs facility in Smithtown.

Sully has his own Instagram account, where you can follow his journey. We hope someone at his new mission posts photos for us occasionally so that we can continue to admire this beautiful dog who served our late president so well.