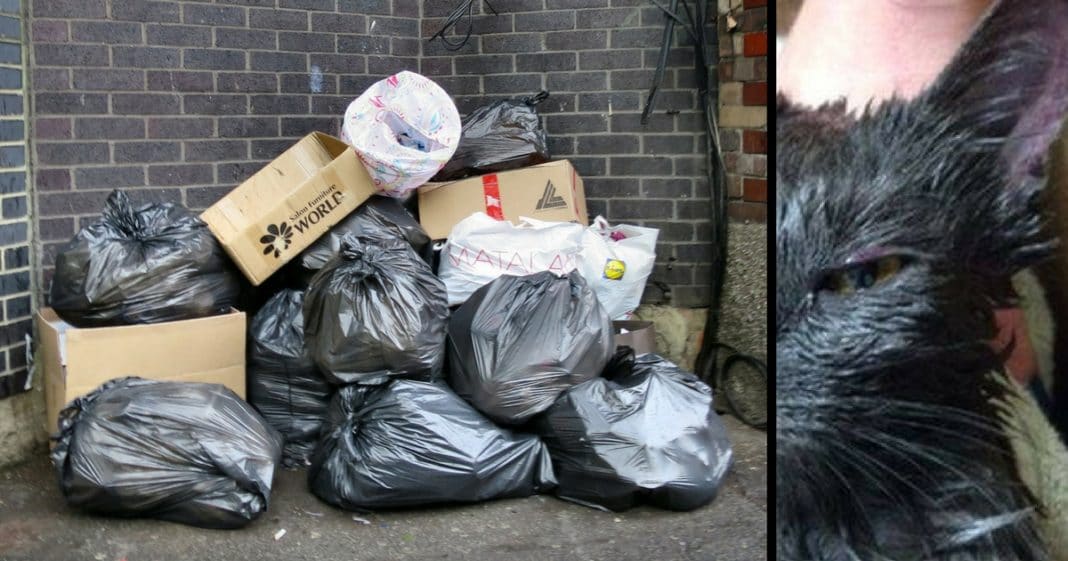 Trash collectors aren’t given enough credit. They see things that would make most of us ill, yet they still have a job to do and they do it without complaining.

The next time they come to haul away your trash, think of this story of two heroic sanitation workers who saved a precious life one fateful day.

While going about their business one day, the workers started crushing and compacting the trash they had just picked up. But then they heard something they never expected – a cry coming from one of the plastic bags.

It took them a moment to find the specific bag, though the panicked cries aided them in their search. When they finally located the bag, they couldn’t believe what they found inside.

A faceless, nameless monster had stuffed a tiny gray cat inside one of the trash bags. What makes this story even more tragic and disgusting is that this depraved person doused the poor kitty with gasoline before doing so.

We can’t wrap our heads around why someone would mistreat such an innocent creature. It takes someone with a nasty disposition and no conscience to do something so horrific. If the workers hadn’t found her, she would have died.

Thankfully, they did find her and they responded quickly. They got the sweet girl to a vet just in time. Miracle Maisy, as she was later named, was significantly underweight and sick from breathing in the harmful fumes of the gasoline for what they estimate was at least six hours.

Because of her rescuers, though, Miracle Maisy is doing much better today. She is expected to make a full recovery and to find a forever home as soon as her recovery is complete.

We’re so glad the trash collectors found Miracle Maisy when they did. We only hope her former owner gets the justice they deserve for the horrible way they treated this cat.

At least this lucky kitty won’t ever have to worry about being harmed again. She has been given a second chance at living a long and happy life filled with happy memories and people who love her.

Are you happy these sanitation workers heeded Miracle Maisy’s cries for help? So share this!