Fussy Baby Crawls Into Stranger’s Lap On Plane. What Happens Next Is Going Viral 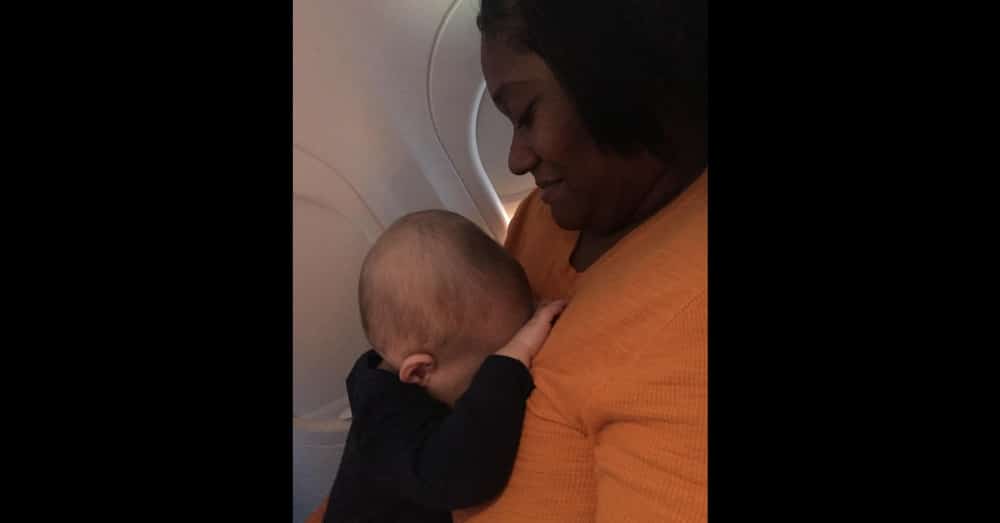 What started out as a travel nightmare turned into a sweet display of a stranger’s kindness during Evan Hughes’ recent flight back home to Fort Worth, Texas.

Evan, his wife, Kari, and their 8-month-old son Ki had been visiting friends in Chicago and were headed back home when a winter storm threw all of their travel plans into disarray.

Evan and Kari were rebooked on different flights, and since Evan’s got in earlier than Kari’s they decided he would be the one to take the baby with him.

Traveling with a baby can be stressful for any parent, especially for one who was expecting to have the help of his wife! Thankfully baby Ki slept for the entire first flight from Chicago to Atlanta.

“Then I had to quickly turn around and change his diaper and change his clothes and get on the flight to Dallas,” Evan recalled. After that Ki was wide awake and raring to go.

India Massinburg was on the same flight and ready to put some music on and relax when she saw Evan and Ki coming down the aisle.

“I was already sitting in my seat and I had my earphones on and thought, ‘Oh man, I hope this man with the baby doesn’t sit next to me’ because I didn’t want crying,” the 25-year-old child care worker laughed.

But the father and son were in the seat right next to her.

Ki did well during takeoff, but then began to get fussy and kept trying to crawl into India’s lap to get to the window.

“He started fighting me, trying to climb over me to get to her because she was near the window,” Evan said. “She offered to hold him so he could look out the window but I said no because I didn’t want to impose.”

When India insisted Even finally agreed to let her hold him. In less than a minute little Ki was asleep on her chest.

“Power of the boobies,” she joked.

With Ki content in her arms India told Evan it was fine if he wanted to take a nap, which the grateful father did.

Evan asked India if he could take a picture of his son sleeping on her chest so he could share it with his wife. He also posted the photo online, where it has since gone viral.

Evan said he remains deeply appreciative of India’s act of kindness that day.

“The kindness of this stranger was truly refreshing on what was quickly becoming one of the worst days in a long time,” he said. “There is still hope!”

When Evan told his wife and the rest of the family about what India had done they weren’t too surprised.

“Their reaction was, ‘Well look at [Ki], who wouldn’t want to hold him?’” Hughes said.

Were you touched by what India did for Evan and Ki? So share this!