Friend Tells Him To Abandon Skunk In Distress, But Something Tells Him He Has To Try 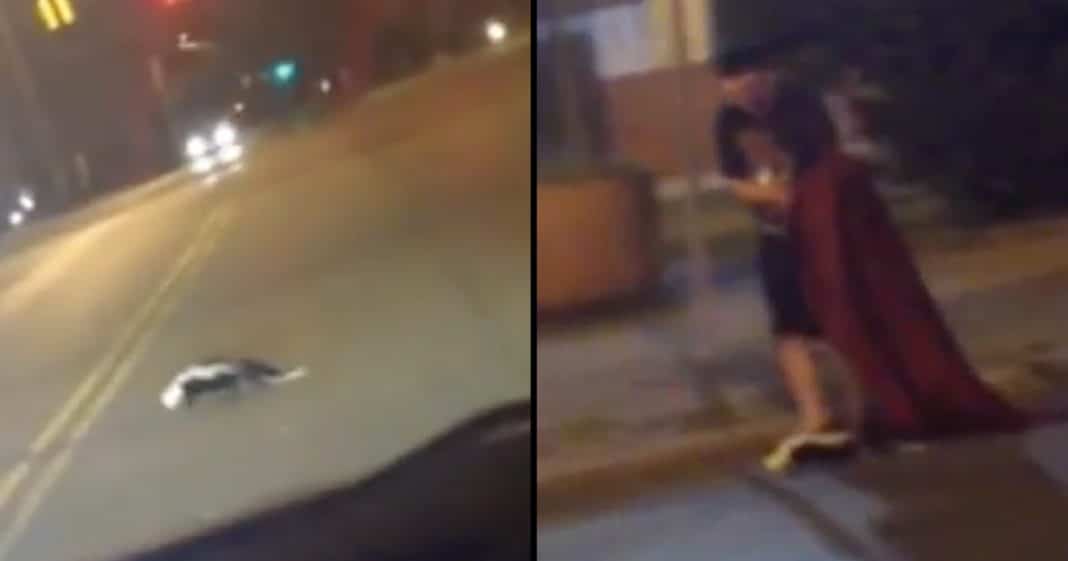 When most people hear the word “skunk,” they immediately recall a most unpleasant scent that I’m sure every one of us has smelled at one time or another in our life. Pungent odor aside, skunk spray can cause sneezing and nausea in both humans and animals. It can also cause temporary blindness if the spray enters the eyes.

Knowing this, what one man risked to save a skunk running around in circles in traffic with a cup on its head is admirable and to be commended.

Two friends were driving down a city street when they spotted the animal in distress, at great risk for being hit by a passing vehicle. That’s when they started filming.

“We’re in traffic and there’s a skunk with a cup on his head,” said one of the young men. “He’s just spinning in circles. I don’t know what to do.”

“I feel bad. I don’t want him to get hit,” the driver of the vehicle said.

“But we can’t help him,” the other man reasoned, knowing the risks involved with sneaking up on a scared skunk.

They went back and forth for a while and finally decided to just leave the skunk and pray he would be okay, but then the conscience of the driver kicked in. “I don’t want to leave him!” he cried.

That’s when he started devising a plan. “What if I try and just rip the thing (the cup) off him and run?” he questioned.

The passenger, clearly not convinced, told him, “It’s up to you. I’m not going near it.”

Overwhelmed with compassion, the driver stopped the car and got a blanket out of his trunk. He started to walk toward the skunk just as a car came and passed over the poor stranded creature, almost hitting it.

Click below to see what this brave man did next:

Using the blanket, the man covered the skunk so he could get close enough to remove the cup. Then he ran away, just in case the skunk decided to spray.

Both the skunk and its rescuer run in separate directions as the man’s friend celebrated. “You did it. You saved a skunk!”

Were you amazed at what this man went through to save this poor skunk? So share this!