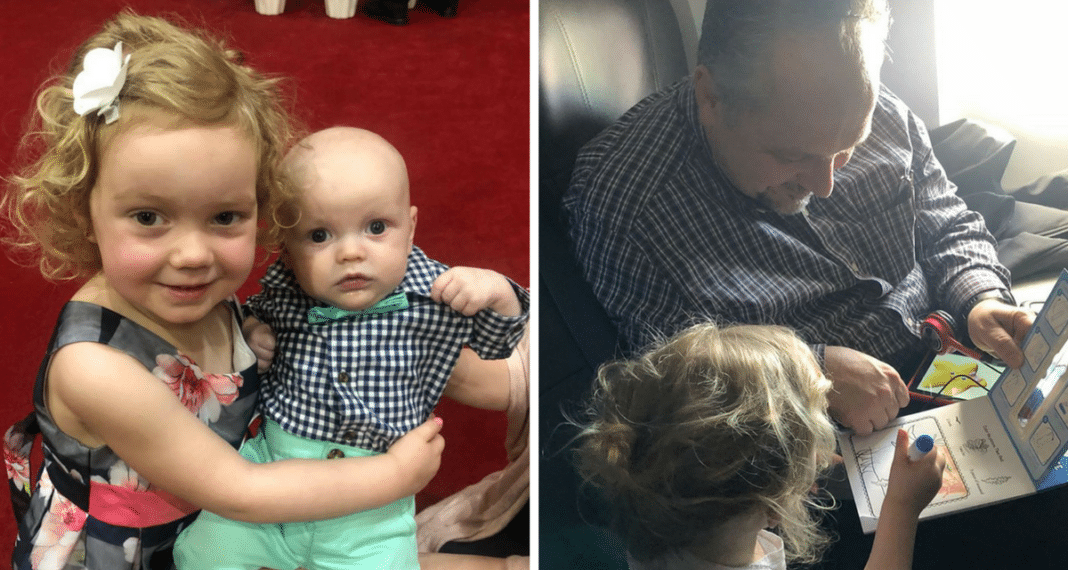 People seem to have more sympathy for a mother with disruptive, loud and crying children at target or Walmart than on an airplane. During a flight, everyone is stressed out; tensions are heightened because everyone wants the trip to hurry up and land so they can get to their destination.

Jessica Rudeen is a mother of two young children. Her son Alexander is 4-months-old, and daughter Caroline is 3-years-old. The three were on a plane midflight when her children started stressing out.

“I want to get off the plane!” Caroline shouted, kicking the seat in front of her. “I don’t want to go!” Alexander was hungry and wanted to eat. She couldn’t feed him then because of all the chaos.

Then, a total stranger named Todd stepped in to calm her children. Jessica said, “This man reached for the baby and held him while I forced a seatbelt on  Caroline, got her tablet and started her movie. Once she was settled and relatively calmed, he  distracted her so that I could feed Alexander.”

During the remainder of the flight, Todd and Caroline chatted. They became the best of friends. Todd helped the little girl color and pointed out everything she could see outside the plane’s window.

“I’m not sure if he caught the kiss she landed on his shoulder while they were looking out the window,” Mom said.

Much to everyone’s delight, the foursome had the same connecting flight. Todd’s wife Stacey isn’t surprised by her husband’s actions. While in a similar situation, they experienced someone extending their kindness to them. Todd was more than happy to pay it forward.

“I am blown away by God’s hand in this because we could have been placed next to anyone, but we were seated next to one of the nicest men I have ever met in my life,” Jessica said.

Jessica didn’t get Todd’s contact information before they parted. She put together the details of his life he shared with her. She managed to find his wife through social media. The two are planning on meeting very soon.

What a beautiful story of human compassion. Things might seem really bad, but with the help of another, they’re not as terrible as you might have thought. Way to go, Todd!