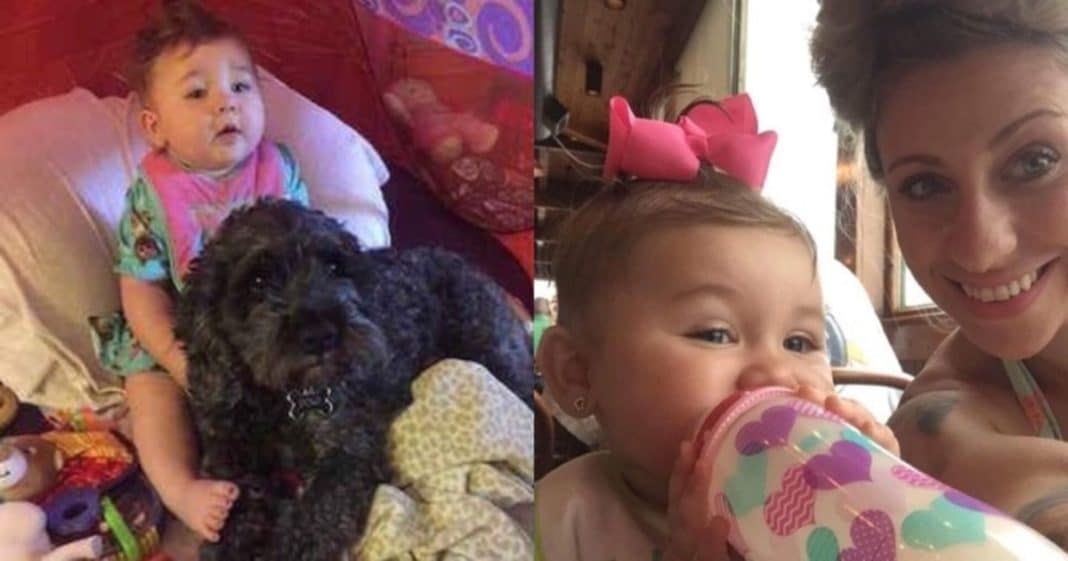 When you put your child to bed each night, you assume all is well; they’ll fall asleep and will be safe and contented until waking the following morning. Nature sometimes has other plans.

Erika Poremski put her baby girl, Viviana, to bed one night in her bedroom on the second floor of her home. It was just an ordinary evening until lightning struck her electrical box, killing all the power in her house.

She couldn’t locate a flashlight. Erika lit a candle so she could see in the darkness of her living room. She used her cell phone, calling neighbors, trying to figure out what to do about her situation.

Erika’s phone eventually died. She couldn’t charge it inside her home, so she went out to her vehicle and let it recharge there. She waited for it to get enough juice to turn back on. It was while sitting there Erika glanced up to her bedroom window. Her heart sank as she observed the glow radiating from the window.

Her bedroom was on fire! The very room where her baby girl was sleeping.
Erika raced inside to find her living room curtains, couch, and carpet ablaze. Worry consumed her. She had to get to Viviana. Thick smoke and flames halted her multiple aggressive attempts.

“I tried to keep getting in,” she said. “She was up to the stairs, but the fire smoke was so heavy I couldn’t get past it… I kept running back out and back in, trying to get up there. Then, the door curling started falling, and I couldn’t get back in.”

Firefighters were on their way. Erika didn’t even notice through all the smoke and heat, “all the skin was off my hand from grabbing the rail, and it melted off.”

The desperate mother wasn’t the only one who tried saving her daughter. Erika’s neighbors and others tried to get inside. They kicked down doors and broke windows. The growing flames kept them out.

“I just heard her crying, and I couldn’t get to her,” the terrified mom said. “I tried hard, everyone in the neighborhood tried. They were kicking the doors in and kicking the windows out. I couldn’t (get her out). Nobody could.”

Also trapped inside the house was Erika’s family dog, Polo. She couldn’t find poor Polo either; he was lost somewhere inside the roaring flames.

When firefighters finally arrived and got inside the house, they found Viviana alive. She made it through because of Polo. The dog had always been protective towards Viviana. When the fire broke out, the pooch knew he needed to look after the little child.

What a hero! This dog, Polo, died saving baby Viviana in a house fire. http://bit.ly/2b9VwSW

The brave dog laid on top of the girl, shielding her from the heat until firefighters found them. The darling dog didn’t let the flames near the little girl. Only 19% of Viviana’s body received burns. It was just on one side, and considering the intensity of the blaze, it could’ve been much worse.

Poor Polo sacrificed his life for his little human friend. He died shortly after the fire. But Viviana’s ordeal wasn’t quite over. Four months after the house fire, the girl slipped into a self-induced coma. Her mother prayed for a miracle. She hoped Viviana would be able to grow up.

“So now I’m praying for a miracle from God to let my baby wake up,” she wrote online. “To let me see her smile again and be able to see and hear momma say I love you beautiful.”

Doctors warned Erika Viviana would probably suffer brain damage and have other complications. Soon though, the swelling in her brain went down, and the little girl woke up. A GoFundMe page established by Erika’s friends and family raised over $42,000 for her medical expenses. The money has also helped pay for several skin grafting operations.

“Thank god for the police and fireman responding so quickly and helping my baby girl be able to breath again on her own,” Poremski wrote.

But thank God for their beloved pet, Polo. He kept his best friend safe and sound until the very end.