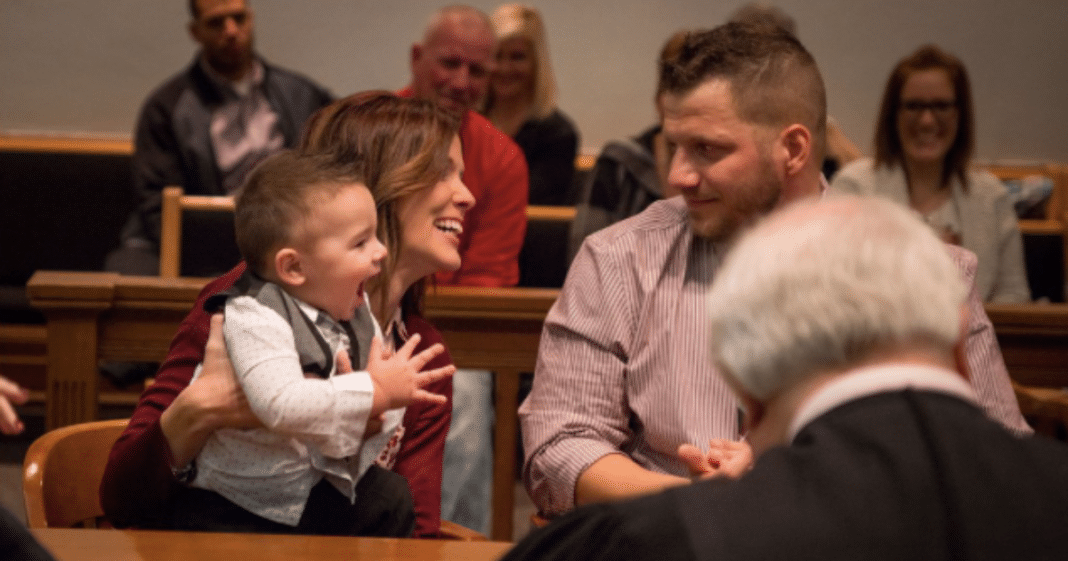 Mandi and Tyler Palmer of Perrysburg, Ohio got married in 2014. They wanted a family of their own, but with Mandi’s Crohn’s disease diagnosis, she was unable to conceive.

The couple looked into other ways to grow their family, as they weren’t going to allow this news to stop them: “That’s when we started looking into other options, and we were talking about adoption, and we kept hearing our county’s commercial for the need of foster parents in our area,” Mandi tells PEOPLE.

Fostering was at first scary for the two: “We were scared. We danced around the idea for a little bit. Then we prayed on it, and we just felt like God pushed us to do it,” she adds. For the past two years, they’ve fostered little Hunter.

Hunter is now 17-months-old and a permanent part of their family. But this journey had it’s worrying moments. The Palmers took Hunter home as a newborn, but until that day last December, when they officially adopted him, they were always concerned he could be removed from their care to be fostered elsewhere.

“Once we got licensed as foster-to-adopt parents, that week, we got the phone call for Hunter. He was eight days old,” Mandi, 33, tells PEOPLE. “We went and picked him up at Children’s Services. We brought him home and we went through the roller coaster ride of foster care for that entire year.”

The family’s lucky day came on December 18th, 2017 when they all headed to their local courthouse. This is a day they’d been waiting for nearly two years. And though Mandi and Tyler always considered little Hunter as their son, it would soon be official.

“It was very emotional, in a good way. We had all of our family and friends there,” Mandi says. “At the end of the court process, the judge announced [Hunter’s] new legal name. And they read the adoption decree and that’s when Hunter looked at my husband, and he said, ‘Dad!’”

She adds: “He just started clapping and everybody just started crying. It was so emotional. It’s  definitely rewarding. It’s nice to look in his eyes now and not have to worry that he’s ever gonna have to leave us again.”

“On adoption day, It’s almost like a ton of bricks just came off our chest. We now know that he’s never leaving us,” Mandi says. “He’ll always be safe and loved with us. So that in itself is rewarding.”

She adds: “Life just happens. We’ve loved him since we’ve gotten him. We’ve cared for him as if he was gonna be with us forever because every child deserves that.”

If only all foster children could be so fortunate to find such a loving home. Congratulations to the Palmer family! We wish you all the best of happiness in the world.