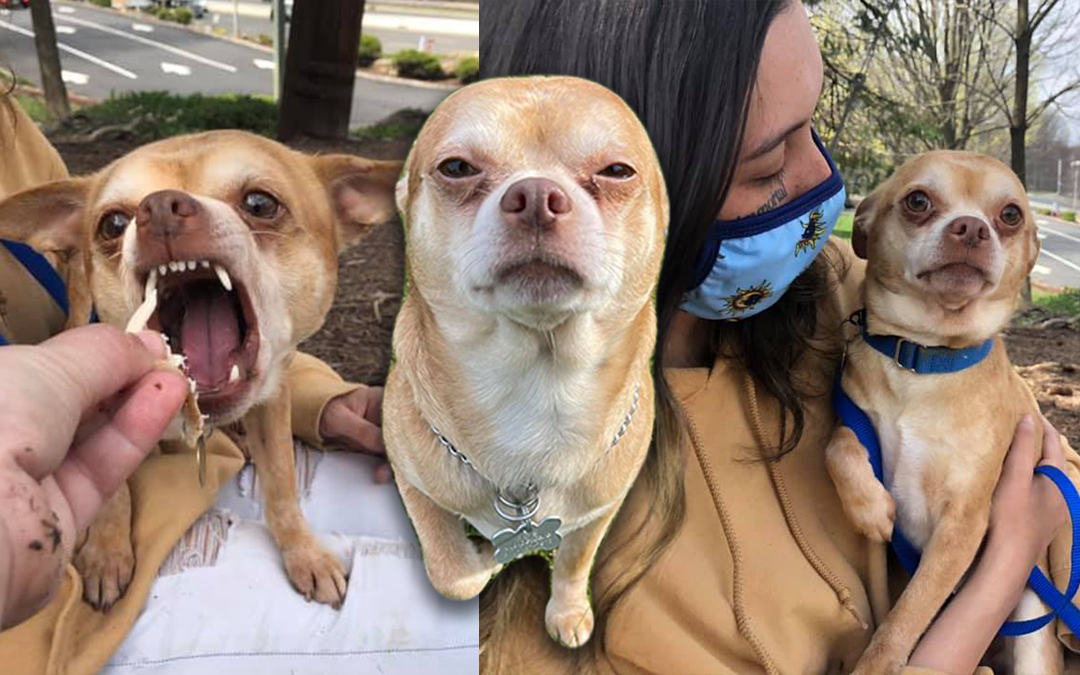 Prancer, the demonic Chihuahua, has spread like a “tiny red plague” across the world news. After a viral post by his foster mom on Facebook, the Second Chance Pet Adoption League in Morris Plains, NJ, has become Prancer’s “agent, publicist, and personal secretary.”

The hilariously honest, descriptive post by Tyfanee Fortuna described the 2-year-old Chihuahua as “a vessel for a traumatized Victorian child that now haunts our home,” and notes that the neurotic Prancer is “50% hate and 50% tremble,” like a familiar Chihuahua meme.

Although Fortuna tried for months to find the right home, she decided to stop trying to make the rascally dog sound palatable. Ironically, that’s when she really got people’s attention.

Prancer and the ‘Demonic Chihuahua Hellscape’

Rather than gloss over it, Fortuna paints Prance in all his nightmarish glory, and the result left us in stitches.

“Ok, I’ve tried. I’ve tried for the last several months to post this dog for adoption and make him sound…palatable. The problem is, he’s just not. There’s not a very big market for neurotic, man-hating, animal-hating, children-hating dogs that look like gremlins,” she says.

Nevertheless, she leaves the door open that quite possibly Prancer is just the right little demon for someone special out there.

“But I have to believe there’s someone out there for Prancer because I am tired and so is my family. Every day we live in the grips of the demonic Chihuahua hellscape he has created in our home.”

A Chucky Doll in a Dog’s Body

Now, she makes no bones about saying that Prancer must go to a home with no kids, other pets, and absolutely no men.

Alas, the little diva despises all men, and she fears that he might turn into “a Chucky doll in a dog’s body” at any moment. Unless you care to witness “the demonic noises and shaking fury that would erupt from his body,” it would be best to give him top dog status.

“Prancer only likes women. Nothing else. He hates men more than women do, which says a lot. If you have a husband don’t bother applying, unless you hate him,” she writes.

Perhaps, a home where only women live would be ideal. Certainly, they would have to get into Prancer’s unique personality and dark charm. Also, there’s the little problem about carefully avoiding the neighbors.

“You can’t live in an apartment or a condo unless you want him to ankle-bite your neighbors,” she says.

And if company came to visit, well, one may want to put Prancer “away like he’s a vacuum.”

Now, Fortuna notes that Prancer does have some endearing traits and would make a loyal companion for the right person who understands him.

“He is loyal beyond belief, although to tell you a secret his complex is really just a facade for his fear. If someone tried to kill you, I can guarantee he would run away screeching.”

Although excitable, he smiles, loves to go for a ride in the car, knows a few basic commands. When away, Prancer is generally quiet and non-destructive. So, considering everything, he’s not so bad, and his behavior may stem from his upbringing.

“He was owned by an elderly woman who treated him like a human and never socialized him,” says Fortuna. “Sprinkle in a little genetic predisposition for being nervous, and you’ve concocted a neurotic mess, AKA Prancer.”

When he arrived at the rescue, he was “obese, wearing a cashmere sweater with a bacon egg n cheese sandwich stuffed in his crate with him.”

Thus, it sounds like Prancer didn’t have socialization with other dogs, causing him to be extra nervous around them.

Recommended: One-Eyed Cat Called ‘Too Ugly’ For Love…Until He Finds His Soulmate

Further reducing the pool of potential adoptive pet parents, Prancer is only available locally in New Jersey from the Second Chance Pet Adoption League. Since he’s most certainly a unique case, they understandably want to be close to assist and recover Prancer should things not work out.

Since the viral Facebook post, the volunteer foster organization has been overwhelmed by worldwide interest in Prancer.

“Please help, he is ruining all of our lives, not just his foster family’s now…,” they sate jokingly.

Prancer has become an overnight sensation, and they have found themselves fielding the paparazzi.

“We need to find the right home for Prancer quickly so this demanding little diva can go get his own staff. We never signed up for this life of fame.

Now, news about the cantankerous haunted Victorian child in a dog’s body has been featured in numerous mainstream news sites. Fortunately, his story is drawing attention to the rescue efforts and an assortment of other “fellow demons” that need a second chance.

Although Prancer is one to remember, the shelter recognizes Ray, a possibly even more endearingly troublesome terror.

“Long before Prancer found his fame, there was Ray and this infamous bio… we don’t even know what to say about what kind of home he needs or why someone would want him. But if you read this and for some reason want to risk your life and adopt him, I guess contact us and we will email you back. Unless he has our phone and is guarding it…” they posted.

It’s wonderful that Fortuna’s hilarious story of Prancer has drawn more interest for dogs seeking a second chance. For the right person, their little diva personalities and needs may be just what they’re looking for.