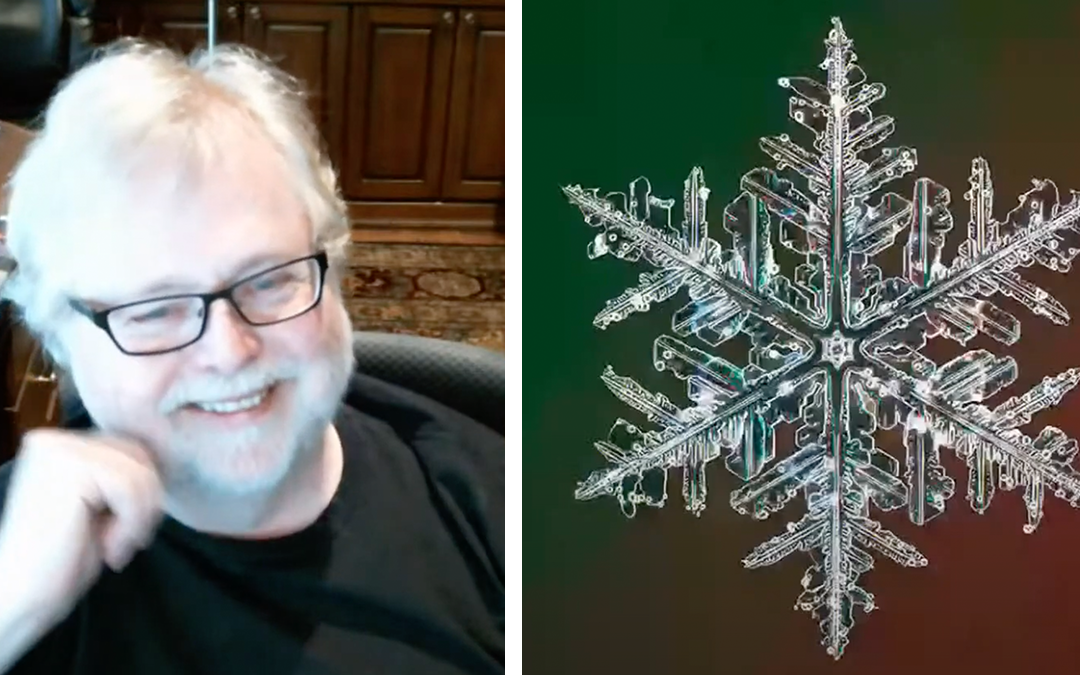 A former Microsoft chief technical officer, and inventor with over 850 patents, Nathan Myhrvold, has taken some of the highest-resolution snowflake images ever.

As winter storms approach, looking at these incredibly intricate tiny hexagonal crystalline structures is a reminder of how magical snow truly is.

Walking in a Winter Wonderland is a classic holiday song and something to look forward to as one of the biggest snowstorms in years arrives in the Northeast. Last year, snowfall was sparse in many Northeastern cities, but this year, it appears snowfall could last for weeks. So, thousands of kids could get their wish for a white Christmas.

Thanks to the pandemic, most of us are staying indoors more. So, the snowfall will hopefully be quite welcome for most. Nestled at home with a warm mug of hot chocolate, a fire, and Christmas lights sounds like a great way to get through the next few weeks.

The Highest-Resolution Snowflake Camera in the World

For those who venture into the snow, the white blanket of powder transforms the whole world. However, it’s only after a much closer look that you see the real magic. Each snowflake is like a glass sculpture at just a few millimeters across. Capturing them in high resolution poses many challenges due to their ephemeral nature.

Nathan Myhrvold set out to tackle the challenge, creating a cooled camera specifically for capturing snowflakes. As the Modernist Cuisine founder, he had set out to capture photos of food like ice cream. Now, he used the skills he developed along with many new innovations to capture snowflakes.

With high-speed cool LED technology from Japan, a custom-designed carbon fiber microscope, extreme computer-controlled focus, and many other innovations, he succeeded. Thanks to his experimentation, he learned the best snowflakes appear at temperatures between –15 and –20 degrees Fahrenheit (–26 to –29 Celcius).

“Because they’re small, you need to use a microscope, effectively,” says Myhrvold. “Because they’re fragile, you can’t take the snowflake from outside and bring it inside,” he explained. No, no, no, no, no. What you’ll have is a puddle.” (see video below)

Amazingly, the artist used a tiny sable watercolor brush to capture each snowflake. Each time he captured a snowflake, static in the air would cause them to jump slightly. Once he managed to wrangle the snowflake, he placed them on a black foam core board to be placed on a “cold stage” made with water cooling equipment made for gaming PCs.

Myhrvold took the shots in Fairbanks, Alaska, and around Ontario, Canada. He chose the locations based on frigid temperatures and finding rental properties with a porch. That way, he could be out in the elements comfortable (sort of!)

As he found out, even many ski resorts were too warm to find the best snowflakes. However, lake-effect snow north of the Great Lakes seemed to be highly favorable.

According to Modernist Cuisine, it took him about 18 months to build the perfect camera. They consider it “the highest-resolution snowflake camera in the world” to date. At the website gallery, you can see the images in glorious detail.

When asked about the project, he explained it was about revealing the beauty in something as common as snow.

“One of the things I just love about snowflakes is they’re utterly beautiful, but on the other hand, they’re utterly common,” says Myhrvold. “Sometimes, to see nature’s beauty, you have to travel to the Grand Canyon or get up late at night to see the stars,” he says. But with snow, all you have to do is pause and look down at your mitten. “It’s a beautiful thing.”

One of the snowflakes, a tree-like “stellar dendrite,” is fittingly titled Ice Queen. Myhrvold explained what inspired him about the shot in his artist’s’ statement:

“Snowflakes are a great example of hidden beauty. Water, which is an incredibly familiar thing to all of us, is quite unfamiliar when you see it in this different view. The intricate beauty of snowflakes is derived from their crystal structure, which is a direct reflection of the microscopic aspects of the water molecule,” he states.

Zooming in on the crystals, you see fantastic symmetry and complexity. Myhrvold explained that he sees even more complexity as he takes the pictures. While he works, the snowflake crystals grow and shrink.

However, most snowflakes aren’t as elaborate as the one above. Thus, he gets excited and jumps into action when he spots one as unique as the Ice Queen.

See an interview with Nathan Myhrvold in the interview by John Koetsier below: