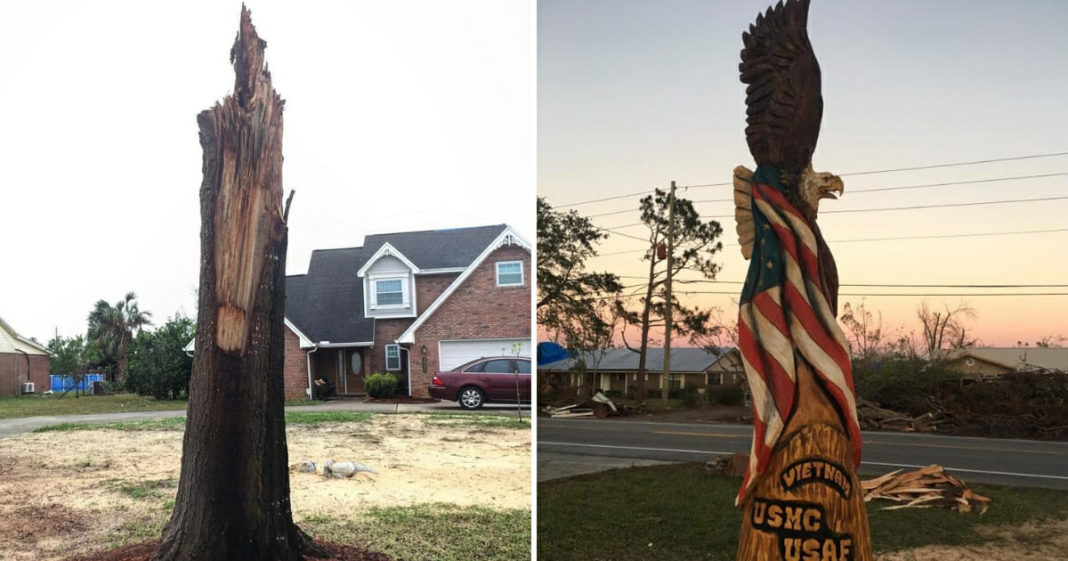 Hurricane Michael devastated the Florida Panhandle in October. It was one of the most powerful Category 4 storms to evern hit the mainland in America, with 155 mile-per-hour winds and ten-foot storm surge. Panama City Beach was particularly hard-hit. Falling trees killed two people as they snapped liked toothpicks and sliced through homes. Now as the city rebuilds, one man is turning a fallen tree into a symbol of hope for the slowly recovering community.

Drivers passing by the home of Sonny Brewer on Baldwin Avenue in Panama City have watched as he has turned a large tree into a patriotic sculpture with the help of a chainsaw artist. Where there once stood a depressing looking ragged stump, now a bald eagle flies above a colorful American flag. 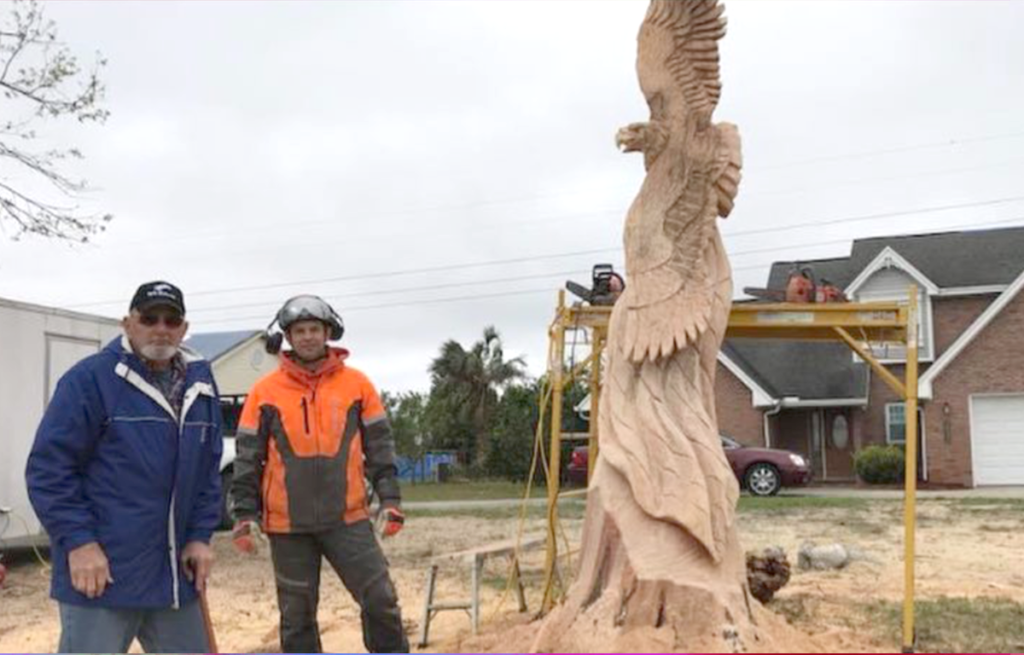 The Vietnam veteran explained why he wanted to turn the tree into a patriotic display in his front yard.

Brewer commissioned the help of local chainsaw sculptor, Chad Gainey, who has turned many downed trees into enormous solid sculptures. Drivers on Baldwin Avenue have enjoyed the view, stopping to take pictures. Others have expressed how much the symbol has meant to them after seeing their community ravaged by Hurricane Michael.

“I fought for this country. I have friends under that flag, and that flag means a lot to me,” said a passing veteran.

“The way this community has been devastated, this means so much to me. The feeling you have is just indescribable,” another veteran said.

Below is what the tree looked like before. It’s sad to look at to say the least and just one of the countless well-established beautiful trees lost in the storm.

A post shared by Chainsaw Sculptor Chad Gainey (@chadgaineysculpture) on Nov 14, 2018 at 8:30am PST

And here is the remarkable tranformation after Chad Gainey worked on it for one day.

Now here is the before and after:

Now the community has a symbol of hope as they confront the task of rebuilding what Hurrican Michael took from them. But they also have another symbol: A huge sculpture of an American eagle that Chat Gainey previously sculpted in Panama City survived Hurrican Michael. See it below.

“One of the few beautiful things that survived Hurricane Michael. Proud to know the artist and wanted him to know it survived unscathed,” wrote the man who posted the picture.

Gainey’s impressive sculpture is helping Panama City Beach stay inspired and strong after Hurricane Michael. It’s a reminder of the American spirit that unites us all and will bring us through hard times together.

See more from ABC 13 News below: