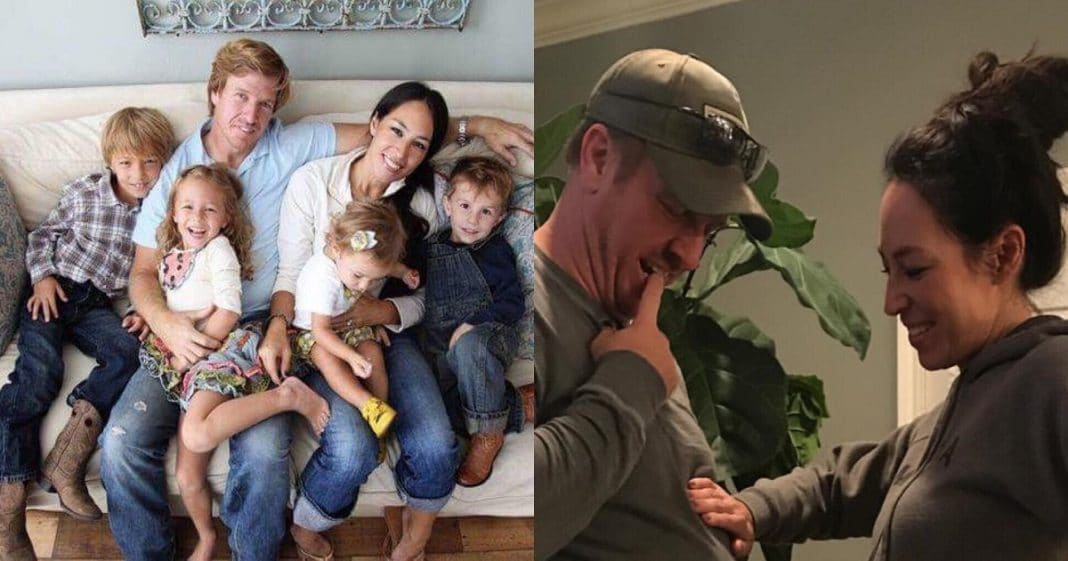 Texas couple, Chip and Joanna Gaines host one of the most popular series on HGTV “Fixer Upper.” The two are down-to-earth. Despite the budget their clients give them to work with, the Gaine’s give every home they fix up their everything. Chip does much of the physical work while Joanna is responsible for the design and decorating of the home. Their four children sometimes accompany their mother to antique shops to pick out items for the home they’re working on, clearly following in their parents footsteps.

The couple took to Instagram on Tuesday, January 2nd, and, to the delight of many of their fans, revealed they’re expecting their fifth child.

Chip, 43, wrote: “Gaines party of 7. (If you’re still confused.. WE ARE PREGNANT) @joannagaines” The couple posted a photo of them cradling  Chip’s fake baby bump. While Joanna, 39, showed off her bump beneath a grey sweater.

Gaines party of 7.. (If you’re still confused.. WE ARE PREGNANT) @joannagaines

Chip and Joanna hinted at some good news in a post-Joanna shared on New Year’s Day: “New year, new hope… Be expectant. There is just something about fresh faith and unwavering trust that brings life to our souls. May this be your best year yet. #2018.”

And in November of last year, Chip mentioned he was looking forward to growing his family: “We had four babies right before the show started, and then we’ve had zero babies since the show started,” he told Houston ABC affiliate, KTRK.  “For me, I’m excited to go back and try to maybe . . . try to make some more babies.”

Joanna wasn’t exactly on board: “Maybe . . . We have different answers,” she said. The two have since swapped opinions a few months ago. In June 2017, Joanna talked about having more babies with PEOPLE: “I would love another baby — or twins! The kids are always asking me, ‘Mom, can you have another baby?’ But Chip thinks we’re done.”

In September she told the magazine: “Family is the most important thing in the world.”

This is so apparent on their show, Fixer Upper. Chip is the affectionate, quirky guy who makes the more serious Joanna laugh and have fun. He loves bringing their brood to homes where his wife remains for hours ensuring the home they’ve fixed up is perfect for its new owners.

Chip swears he can already tell it’s a boy. Look at the little heartbeat!! ??❤️❤️ #5

Chip and the kids will often bring Joanna a snack, come to help or just drop in to say, “hi mama, we love you.” Hugs and kisses are exchanged and the energetic daddy who loves demolition day will then take them home. Everyone in the family loves it when Joanna finishes her work early so she can eat a meal with them or just spend time with her precious people.

We’re sure the Gaine’s family will shower their newest addition with all the love in the world. He or she has four older siblings who can’t wait to meet them!