Fisherman Find Bear Cub Clinging To Side Of Boat, Then Realize He’s Not Alone 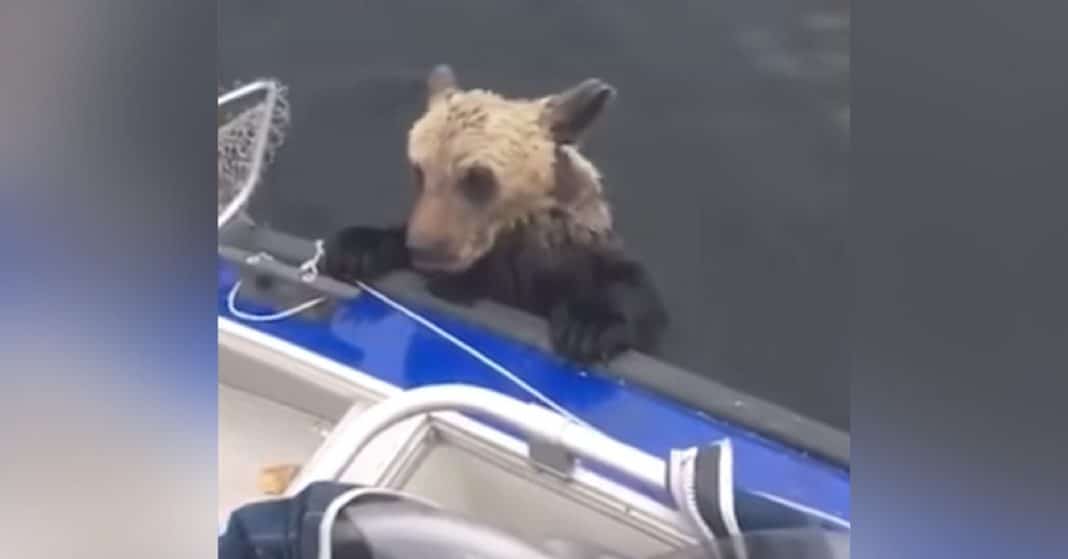 Have you ever taken a cruise in Alaska? From a safe distance, you can observe wildlife in its element without interfering with the cycle of life. The whales and other marine life look beautiful and magnificent.

But have you ever seen an animal in danger and wanted to help? It’s entirely natural to wish to do so. We help dogs and cats and other domesticated animals, but usually not those in the wild. It’s too dangerous and risky. They could attack us, causing great harm.

You may have seen those clips from National Geographic where animals fight to the death or are seen starving and dying. Can you imagine how those filmmakers must feel? They have to resist the urge to step in and save the suffering animals. They must allow nature to take its course, whatever the result may be.

In Russia earlier this year, a group of tourists and some local fishermen weren’t given much of a choice when two brown bear cubs attached themselves to their boat.

In May of this year on Lake Vygozero in the Karelia region of northern Russia, a boat filled with tourists and piloted by fishermen found the two bear cubs clinging to the side of their vessel. The cubs had become separated from their mother who had overestimated the distance they could swim across the lake. The two cubs grew weak and could no longer swim.

The heartwarming and endearing rescue was caught on film. You can see the two fishermen talking to the cubs, encouraging them to hold on, and the bears’ total faith and trust in the men attempting to save them.

“We picked them up and dragged them to the island to which their mother had swum,” said Ruslan Lukanin.

They knew it was dangerous, but they also knew they couldn’t just abandon the cubs.

“We couldn’t just look the other way,” Lukanin said.

At one point, the boat appeared to falter just as the shivering cub was tiring from its attempts to climb aboard. One of the fishermen used a net to give it a boost.

The men comforted the cubs as they struggled to get on the boat.

Finally, the bear cubs were brought safely on board.

The cubs were clearly exhausted from the whole ordeal and the fishermen knew they couldn’t just abandon them. Still too weak to walk, the men took the cubs to the nearby island where their mother was and carried them into the woods. Knowing there was nothing more they could do for them, the men left the cubs in the forest, hoping their mother would find and nurture them so they might recover.

What a lovely story of humans helping animals. This is definitely not something you see every day! I’m sure all the people aboard the boat battled within themselves whether to participate in the rescue knowing the danger involved, but their compassion for their fellow creature won out, and we’re so glad it did.

Were you happy to see these fishermen rescue these drowning bear cubs? So share this!