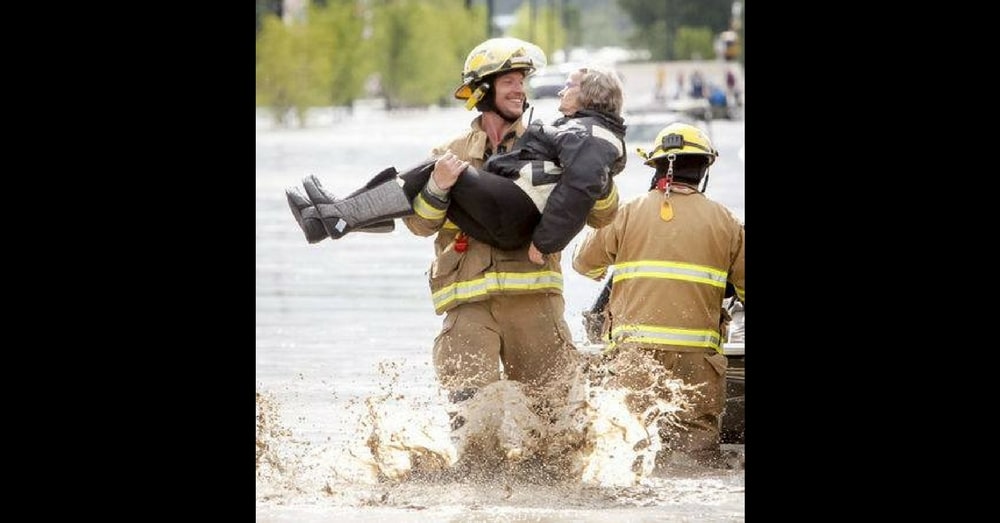 In a photo that has been making the rounds on social media lately, a fireman appears to be laughing as he carries an elderly woman to safety during a dangerous flood. The photo itself is great, but the story behind it is even better!

Shawn Wiebe is a fireman in Alberta, Canada. The area recently became flooded and people became trapped in their homes and cars as the situation became much worse than anyone had expected.

Shawn and the other firemen in the area did what they could to help. When he saw an elderly woman trying to cross the water, he went over to her and offered his assistance.

He realized quickly that it would be much easier to carry her than to help her walk through the water. At first she said she didn’t think he could carry her, but he insisted he was strong enough and picked the woman up in his arms.

As he carried her, the woman exclaimed, Oh! I haven’t been carried like this since my wedding night!”

Shawn couldn’t hold back his laughter at the woman’s surprising remark, and thankfully a photographer from the Calgary Sun, Lyle Aspinall, was there at the perfect time to catch the lighthearted moment.

At a time of panic and destruction, it was nice to have one moment of laughter to light up the day.

Were you amused by what this woman told the fireman? So share this!