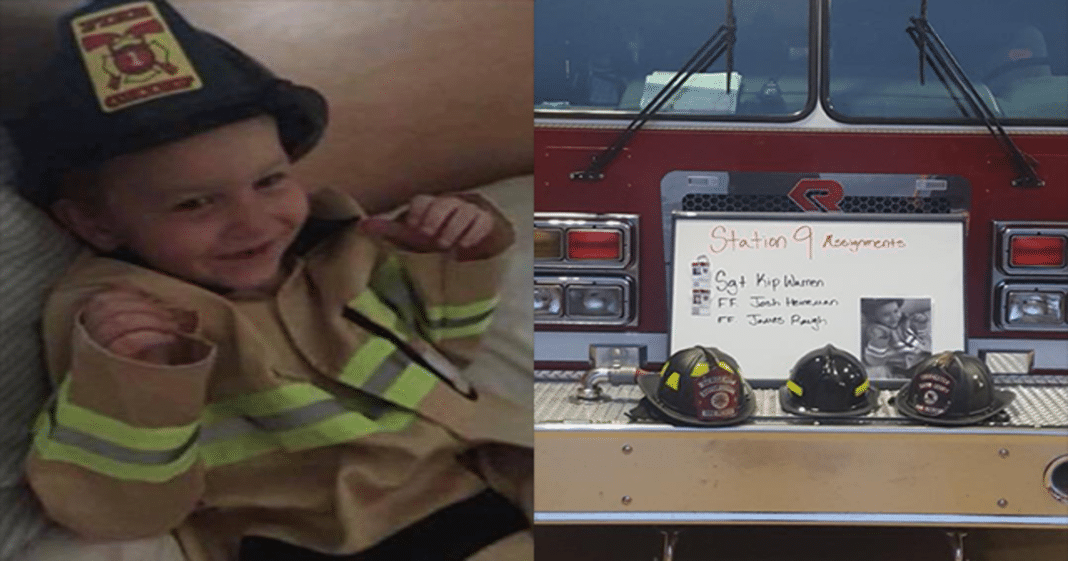 Like many little kids, 4-year-old James Raugh wanted to be a fireman when he grew up. He wished to take after his father an uncle who were firefighters. Little James got his wish as he was made an honorary fireman after he was killed when his family mobile home caught fire. James, along with his two little sisters, Jalissa ‘Missy,’ 3, and Jordan, 23 months and father, Nate all died in the blaze.

First responders found the four family members inside their home around 1 in the morning.

They battled the inferno for nearly 20 minutes before they were able to get inside. The mother, Brittany, wasn’t at home when the fire started.

“James, the oldest of the kids, was only 4, his dream was to grow up to be a fireman. Sadly, that dream will never come to fruition. Here is where y’all come in … we would like to send James ‘ on duty’ with as many departments as we can,” a relative wrote on Facebook.

Fire departments across the United States and from around the world heeded the request to add James to their roster. He was honored in states such as California, Tennessee, Ohio, Georgia and his native South Carolina, as well as countries including Saudi Arabia, Switzerland and Australia.

James was a: “typical little boy” who “loved dressing up as a firefighter and loved tractors and being outdoors with his dad,” read an online obituary. His sister, Missy, was “a prissy little girl. She loved doing hair, makeup, and nails and getting dressed up.” Jordan “loved her baby dolls and ‘cooking’ with her little stove and utensils.”

A GoFundMe page has been established to help pay for funeral expenses. The Bartow County, Georgia Fire Department placed an image of James decked out in a fire hat and turnout coat on its Facebook page. They also posted pictures of the little boy’s name written on their fire house’s assignment board.

“It is our great honor to have Honorary FF James Raugh on duty with every engine and ladder company with the Bartow County Fire Department. RIP little guy!” a post read.

James’ uncle, T.J. Johnson, always carries a child-sized hat and fire coat in his truck beside his firefighter gear. “He just loved the lights and sirens,” said Johnson. “Anytime he’d come to the house, even if I didn’t have a call, he wanted to turn these red lights and stuff on in my truck,” he told WLTX-TV.

Hundreds attended the funeral for the children and their father. Among the mourners at Friday’s ceremony were firefighters who arrived in their dress uniforms. They drove their rigs from places near and far in the region.

“It’s about James today, tomorrow and yesterday,” Columbia Fire Department Capt. Brick Lewis told the station. “We want to keep his memory alive for his family’s sake, his friends and for the fire service that had to respond to that call.”

God bless James, his father and sisters, their family and all first responders. Thank you for all you do. James’s memory will live on with all firefighters continuing to honor his memory and those of others who have died in the line of duty.