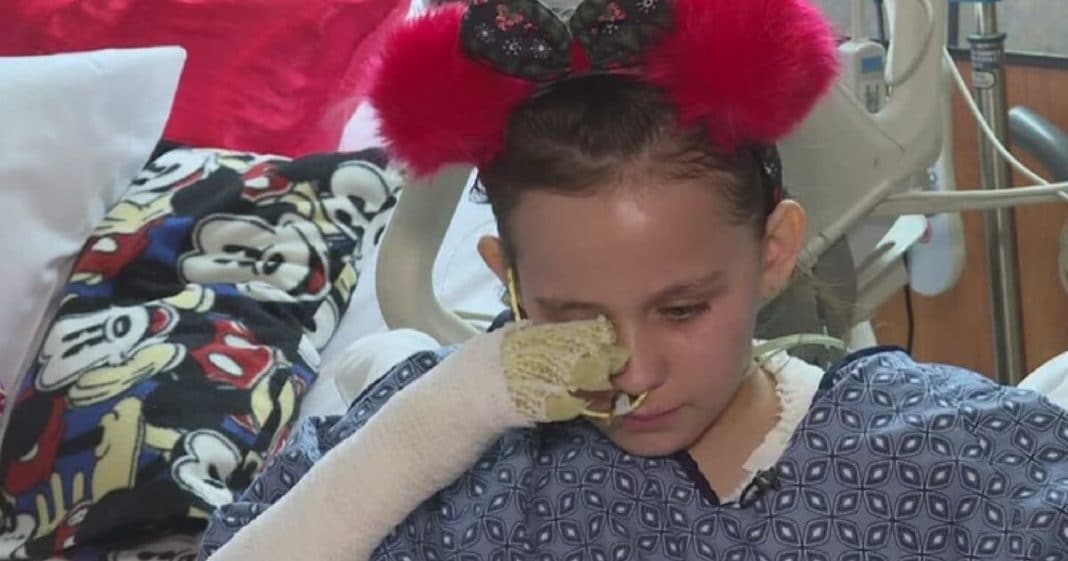 On St. Patrick’s Day, the McCunes were enjoying a fun evening in the front yard of their Arizona home, when suddenly things took a tragic turn. The family was sitting beside their homemade fire pit when it unexpectedly exploded.

While her father did sustain burns, 8-year-old Isabella suffered the worst injuries of all.

“We never intended… for this fun night… to turn so tragic,” Lilly McCune, Isabella’s mother,  commented in an interview.

Isabella ended up with third-degree burns all over her body. She’s undergone multiple surgeries and wasn’t able to walk or speak for over two months.

While recovering from the terrible accident in the Arizona Burn Center, Isabella listened to music from her favorite singer, Taylor Swift, to help her get through the harrowing ordeal.

When the young girl learned that the pop star was kicking off her “Reputation” tour in Glendale, Arizona, not too far away from the Burn Center, she had an idea. Isabella recorded a video for Swift, a poignant plea from her hospital bed, explaining how she had hoped to go to the concert in Glendale but that she couldn’t leave the hospital.

“I heard you were here, and I wanted to visit you, but maybe you can come and visit me,” she said in the video.

While young Isabella hoped her wish would come true, nothing could have prepared her for the famous singer’s response.

Three days after recording the video, Isabella stared from her wheelchair in disbelief as a smiling figure in a yellow hospital gown walked into her room.

Could it be? Was it possible? Was it really … Taylor Swift?

Swift sat on the edge of Isabella’s bed, scooched closer to the little girl in her wheelchair and said how glad she was to meet her.

Finally, Isabella could talk. She told Swift how much she liked her music and how she listens to it during the worst part of her day.

For two, sometimes three hours a day, doctors work on her, changing the dressings on burns that cover almost all of her body. Isabella listens to the music and sings along, her sweet voice soft in the operating room.

Isabella told Swift how it is the only thing that keeps her calm.

The star spent thirty minutes with Isabella and her family. And she didn’t leave without writing a special note in the third grader’s memory book and showering her with all sorts of “Reputation” swag.

Swift wrote a message in Isabella’s journal, where hospital staff and visitors write her inspirational notes: “Isabella! I hope you feel better soon and I’m honored you’ve been listening to my music. You’re so awesome and I can’t wait to have you at a show!!

Swift said her goodbyes, gave 14-year-old Zachary McCune a hug and was headed for the door when Isabella piped up: “Excuse me. Excuse me, Taylor. Could I have a hug?”

Swift walked back to the girl. “Of course!” she said. Swift had wanted to hug Isabella but didn’t know if she could. “I just didn’t want to hurt her,” Swift told the family.

A tender wish fulfilled, After weeks of excruciating pain this 8- year-old girl has endured, Taylor Swift heard her plea and came to her hospital room. Article: https://www.12news.com/article/life/heartwarming/taylor-swift-visits-8-year-old-phoenix-burn-survivor-in-hospital/75-549293673

“She just was so natural… such a breath of fresh air,” Lilly McCune said of the experience.

Swift leaned down to gently hug Isabella. Isabella’s mom took a picture and said, “Hold on, I want to come around for a better angle.”

She didn’t let go, not for a few minutes. Isabella’s mom got pictures, some a little blurry because her hands were shaking with excitement.

“Thank you so much for coming to see me,” Isabella told Swift.

The smiles on the McCunes’ faces speak volumes. Whether you’re a fan of Taylor Swift or not, I think we can all applaud her for this generous act of kindness towards a young fan.

Posted by Valleywise Health on Saturday, May 5, 2018

Did Taylor Swift’s surprise for Isabella bring a smile to your face? So share this!