Bullied 5th Grader Won’t Hit Back Because ‘It’s Not The Jedi Way,’ Then A Famous Jedi Offers His Support 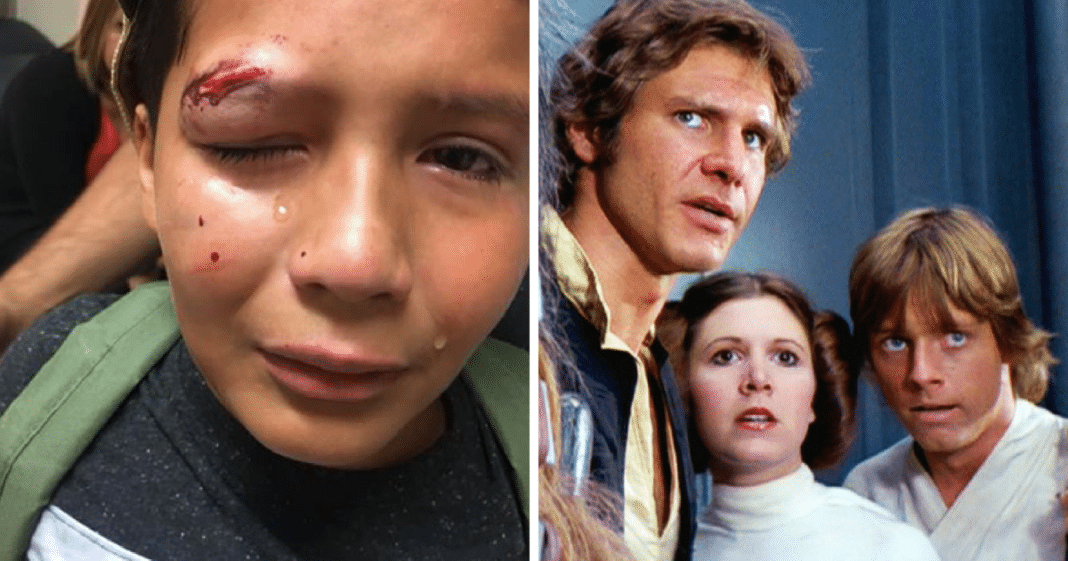 A mother in Desert Hot Springs, east of Los Angeles, California shared a picture of her son, who was brutally attacked by bullies at Two Bunch Palms Elementary School. She claims the fifth-grader has been bullied for three years and that bullies have told him to kill himself repeatedly.

On August 27, she shared a picture of her son Aiden Vasquez after bullies left him bloodied with a 3-inch laceration in his eyebrow and swelling of his cheek. They had tried to rip his backpack. He resisted letting them have the backpack but refused to fight the bullies.

After a trip to the hospital for stiches, Casanova relayed his message:

“Aiden wants me to let everyone know he’s doing fine all stitched up and numb..he said he felt it in his soul not to hit the kid back…ITS NOT THE JEDI WAY!! ???”

Here is the original post that has gone super-viral in days, outraging social media users. Although Aiden may not have fought back physically, his mother has become enraged and exasperated, as she considers having to move her son to a different school for his safety, leaving behind his friends.

I HATE TWO BUNCH PALMS ELEMENTARY SCHOOL IN DESERT HOT SPRINGS! this is the THIRD YEAR MY SON IS BULLIED!! Yes he is…

Now the Desert Hot Springs police are investigating the incident as an assault, while the school conducts its own investigation.

On Tuesday, Casanova took her fight for her son’s safety to the Palm Springs Unified School District School Board, where both she and her son spoke out about their problem with bullies.

Although the child who hurt Aiden was suspended from school for three days, she still doesn’t feel like her son is safe at school.

Ironically, the Two Bunch Palms Elementary school received an award for “Positive Behavior Intervention and Supports” at the public meeting.

From the Desert Sun:

“As Two Bunch Palms administrators approached the dais to receive their award and have their photo taken, Casanova interjected, suggesting her son — whose eye is blackened and swollen shut — should join them in the photo.”

Both she and Aiden spoke. He said that he hopes no other student will have to go through what he has.

GET IT BABY!! My son is AMAZING!! He is not speaking only for one or himself he is speaking for ALL!!

The board members unanimously supported Aiden and his mother, offering to meet to discuss ongoing concerns with the parents involved.

The school’s principal, Joseph Scudder, issued a statement that the school district could not share specific information about the incident because of confidentiality laws and that social media posts “do not contain the full story behind an incident.”

On a much more uplifting note, the ultimate Jedi, Mark Hamill, who played Luke Skywalker in the Star Wars saga, reached out to Aiden personally on Twitter. Aiden’s relative shared confirmation that he got the message. For any Star Wars fan, it doesn’t get much better than that.

I'm astonished by his wisdom & courage such a tender age. I may be a fictional Jedi, but this boy is the real deal. Not sure how to reach out to him, but I hope he sees this message & knows how much I admire him.

SHOUT OUT to Aiden Vazquez for his courage & wisdom in the face of adversity. I'm so proud of you for showing that you can be a Jedi in real life. Congratulations, Aiden- The Force will be with YOU… Always!!!
Your fan, mh https://t.co/jkWqrhMaC0

We also stand with Aiden and his mom against bullying and hope that the bullies at his school have learned their lesson. Bullying isn’t the way of the Jedi or the way of any decent human being. We all have to do much better.

See more in the video below from ABC13 Houston: