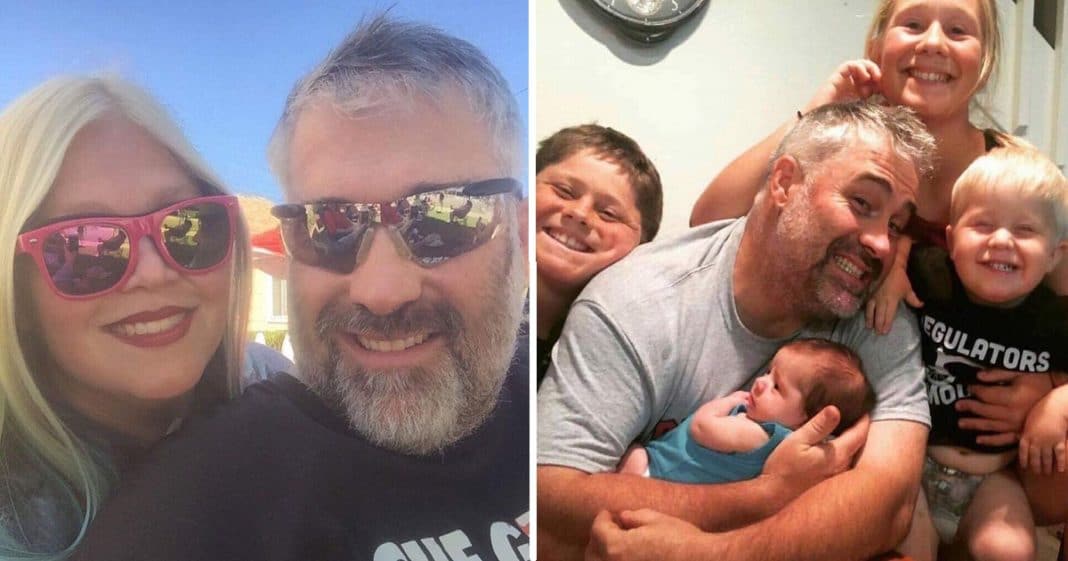 The flu has flared up across the country. Thousands crowd emergency rooms, and in some places, they’re triaged to mobile stations for flu patients only because E.R.s are overflowing and unable to handle the swarm of sick people.

The CDC recommends anyone over the age of six months receive a flu shot. those most vulnerable to contracting the flu are babies, pregnant women, the elderly, and those with compromised immune systems. Most don’t bother being vaccinated because they don’t ever get sick. They don’t believe they’ll get the flu.

This was the case for US Navy veteran and father of four Shawn Borrough. The 48year-old began experiencing symptoms of the flu as the flu epidemic began spreading through San Diego around Christmas.

His wife Jennifer explains: “He had a little chest congestion, headache, body ache.

Shawn’s symptoms increased; despite feeling worse, he continued working 12-16 hour days every day. Ignoring his health was a huge mistake, and little did Shawn and his family realize, this could cost him his life.

The Borrough family spent New Year’s day in the hospital: “He couldn’t breathe. They had to rush me out, they had to intubate him and sedate him,” Jennifer explained.

“They told me he was in renal failure, his white count was through the roof, he has severe  pneumonia.”

Jennifer couldn’t believe Shawn was in such a sorry state. Other than being “a little overweight,” the father of four was healthy.

What further compounded her shock was, when doctors tested their children for the flu, they discovered the virus was present in two of them. They dodged a nasty bullet; doctors checked their lungs and found them to be clear. The family decided not to get flu shots because of low success rates. I wonder if this frightening experience will change their minds.

Come January 4th; doctors had good news for Jennnifer and the kids: Shawn had staph pneumonia. This is quite treatable. Shawn is still currently on a ventilator and heavily sedated.

Shawn’s wife is keeping friends and family updated on Facebook. She continues to ask for prayers for Shawn’s recovery.

“I still can’t believe this is happening,” she wrote. “I cling to every piece of positive progress….I try not to because we are still deep in the woods, keep praying for everyone. Please!!”

Friends of the Borrough’s set up a fundraising page where they’ve met their goal of $5,000; they have also established a meal train for the family where they will take turns preparing meals and delivering them to the Borrough bunch.

“Although our prayers are needed and helpful, let’s give just a tad more! Let’s start a meal train  to help ease some responsibility off of Jen’s shoulders so she can focus more on being with Shawn.”

Jennifer is sending out a warning to everyone to prevent something like this from happening to them; “If you’re sick — I mean, the first cough, I don’t care if it’s not the flu — go get seen just in case. You never know.”

We hope Shawn makes a quick recovery so he can return home to his loved ones who are waiting with eager anticipation.

SHAWN COME ON YOU HAVE TO WAKE UP!! All your work buddies are pulling for you babe!! ❤️❤️❤️ thank you everyone !!!