Fan Asks To Play Keith Urban’s Guitar. What Happens Next Made My Mouth Drop 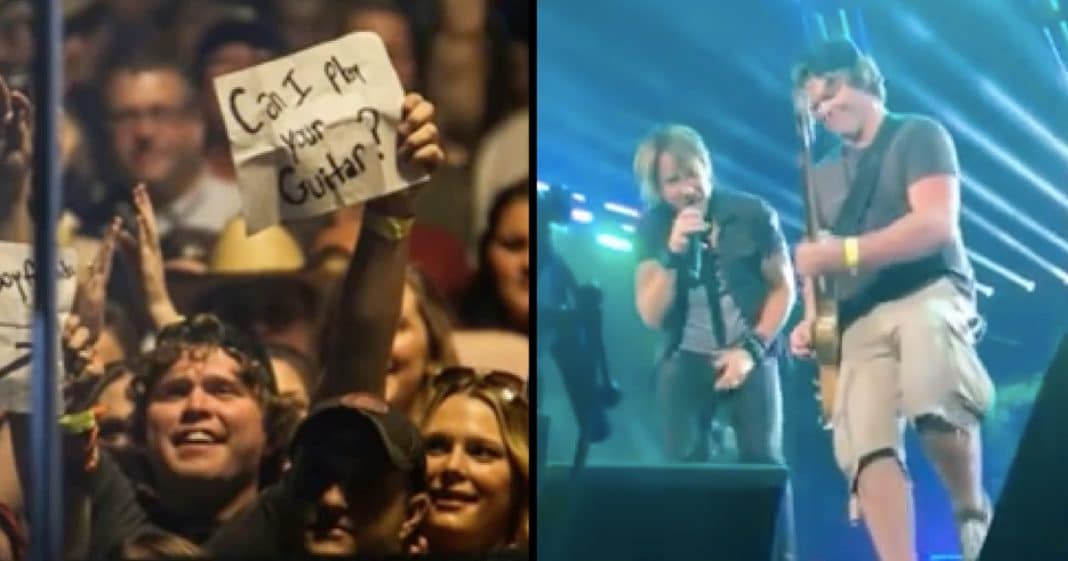 Most major musicians are used to seeing fans hold up signs for them during concerts. Some of them may be declaring their love for the band, while others may hold outrageous requests.

But when Austrailian country music star Keith Urban saw one fan’s unusual request he decided to give him a chance, and what happened next left everyone in the audience stunned.

Keith was finishing up a set when he saw a fan in the front row holding a sign that read, “Can I play your guitar?”

Next to him was a girl holding another sign: “It’s my boyfriend’s birthday!”

A massive shout out to Rob – who killed it last night on the guitar!!! You played your ass off! – KU #ripCORDWorldTour

Urban started talking to the couple and found out that the guy really did play the guitar, and he invited him to come up on stage with him.

The fan introduced himself as Rob and his girlfriend, Lex, spoke very highly of his skills on the guitar.

“Let’s grab another one of my guitars real quick. Heck, play this one,” Urban said, handing Rob his guitar.

“No pressure!” he joked as Rob put the strap over his head.

When Rob started to play, though, even Urban’s mouth dropped. This guy is GOOD!

Urban’s band joined in and they played the singer’s hit “Good Time,” which has some very difficult guitar riffs in it. Rob not only held his own with the band, but totally stole the show!

“Killed it! He totally killed it!” Urban shouted after the performance. “That was badass, man.”

After the show that night Urban still couldn’t get Rob out of his head and gave him a special shout-out from his tour bus.

We’re sure this birthday will be one of Rob’s most memorable!

Did you love watching Rob surprise everyone as much as we did? So share this!