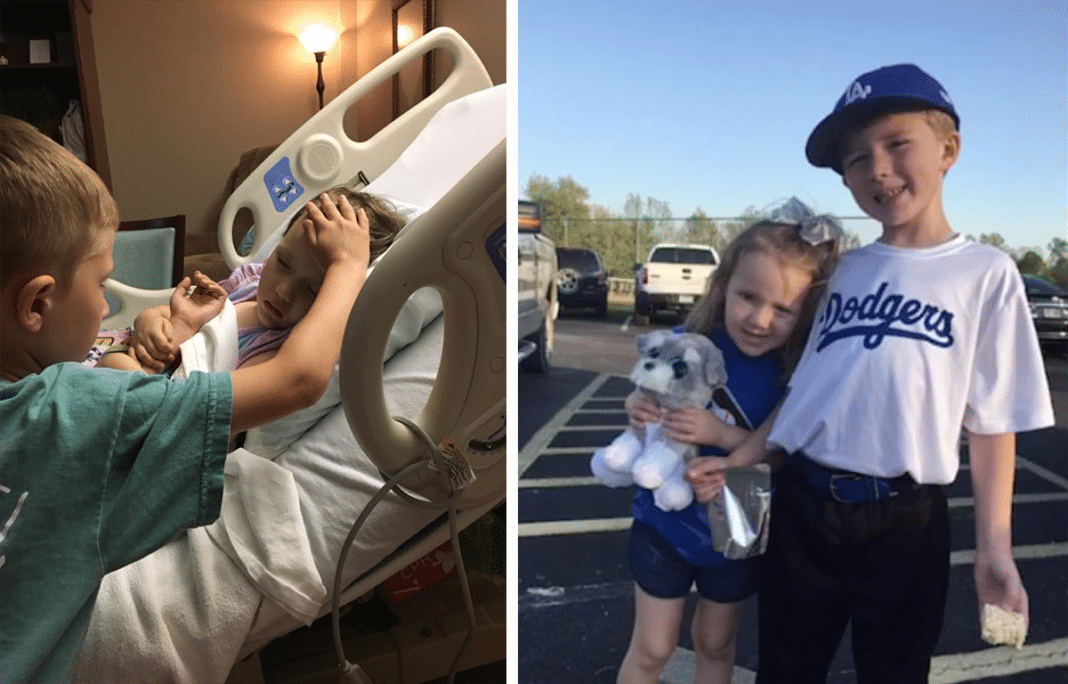 Adalynn “Addy” Joy Sooter, a 4-year-old girl from Springdale, Arkansas was comforted as she lay dying of cancer by her older brother, Jackson. Her father shared the photo on Facebook, saying that the boy didn’t want to leave her side. Adalynn had just one day left before she would pass away.

“A little boy should not have to say goodbye to his partner in crime, his playmate, his best friend, his little sister. This isn’t how it’s supposed to be. But this is the broken world we live in,” wrote Matt Sooter.

A little boy should not have to say goodbye to his partner in crime, his play mate, his best friend, his little sister….

One of Addy’s favorite things was spending time with her brother:

“Addy loved princesses, shopping, dancing, and singing. She loved being outdoors and playing with animals. Addy enjoyed spending time with big brother, listening to him read books and playing games. She was a very joyful little girl who brought an infectious happiness wherever she went. She was strong and determined and fought with so much grace. She will be missed.”

In the end, she passed away peacefully:

“Our sweet little girl received the miraculous healing that we’ve all been praying for so long and ran into the arms of Jesus. She passed from this life to the next just as she had lived: stubbornly but also peacefully, and surrounded by family. She wasn’t in any pain at the end.”

A group of over 6,300 people had come together to support and offer prayers to Addy and her family on Facebook as she received treatment in Monterrey, Mexico.

A celebration of life was held over the weekend, and the family asked everyone to wear bright colors or “one of Addy’s favorite colors, pink, purple, or blue.”

The day after her passing, the family honored a gift she made to help others. Maybe one day soon, her gift will help find a cure so that other families don’t have to endure the loss of their precious child.

“Yesterday, Addy once again made the trip from Rogers to Arkansas Children’s Hospital in Little Rock. This morning she donated her tumors, both brain and spine, to scientific research in hopes of saving future children from a similar fate. Our sweet girl loved helping people and giving gifts so we thought this would be an excellent way of showing her giving heart.”

Celebrating the Life of Addy Sooter