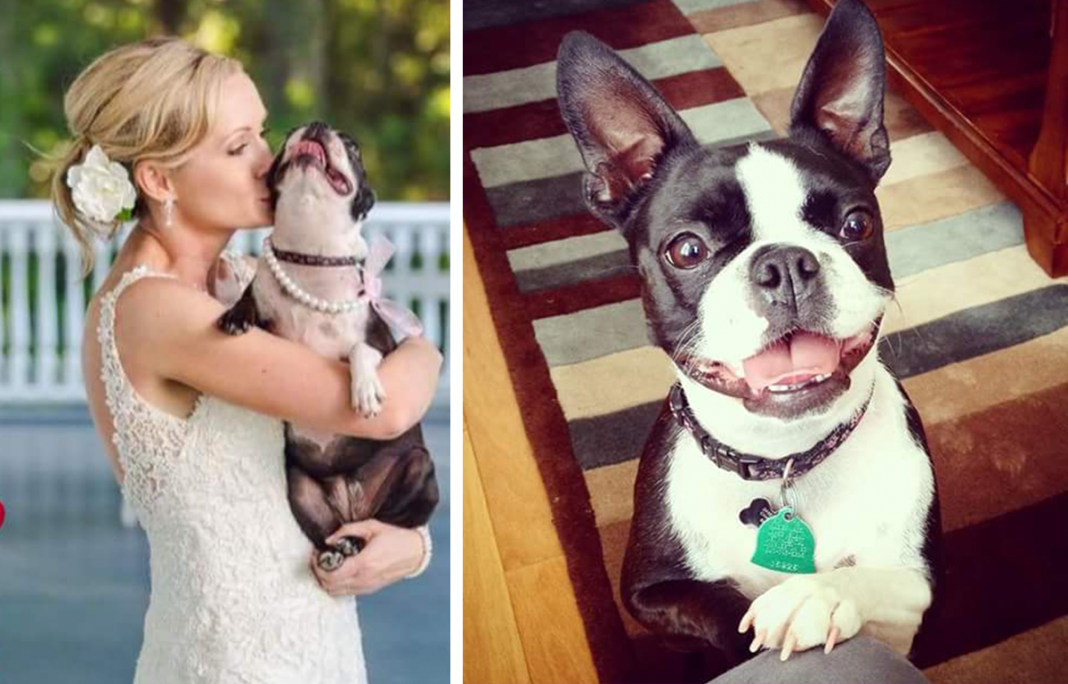 A devastated pet owner, Courtney Sexton Gresham of South Carolin, shared a warning for all pet owners. Their family lost their precious and healthy 5-year-old Boston Terrier named Emmie unexpectedly. They had no idea that having her in a kennel while wearing a collar could be lethal, and now they want to warn everyone they can.

The beloved family member “never met a stranger,” enjoying the company of cats, dogs, and people alike. Emmie enjoyed taking part in family activities, from kayaking to traveling to friend’s houses. Nobody knew that the dog’s biggest danger was waiting right at home.

Posted by Courtney Sexton Gresham on Wednesday, May 20, 2015

Since Gresham’s husband Brent wasn’t at home as he generally was, Emmie had to wait for her family to come from work in her crate.

“On Tuesday morning before leaving for work, Emmie and I did our usual routine… (my husband just happened to be out of town with work, he works from home a lot of days)… she went out in the yard to potty, she had a little breakfast and so did I, I threw a few treats around the kitchen for her to chase and pounce upon before eating, and I put her in her (extra-extra-large) wire metal crate before leaving. She didn’t like the crate much (who could blame her?); she’d MUCH rather be with Brent or myself… but we have to go to our jobs. I blew her a kiss, told her bye, and said that I’d see her after work.”

While the family was away, Emmie worked to free herself, and it would lead to her death.

“I left work a little early and got home that afternoon. I opened the back door and immediately saw Emmie up on her back legs in the crate. I ran to her to find that her COLLAR was hung on a part of the metal crate near the top. In tears and screaming, I opened the door and unhooked the hung part of her collar. She was unresponsive. I rushed her to the emergency vet to see if they could save her… but sadly, it was too late. The vet called it a freak accident. She was trying to open the kennel door, her collar got hung on a jutted-out piece of the crate, and she had been strangled.”

The family hadn’t heard about the dangers of putting animals in a crate with their collar on. In fact, even when playing around with other dogs or in the yard, the collar can get stuck in unexpected ways: on a tree branch, on another dog’s mouth, and even on a doorknob.

The tags on the collar can also get hung on something. There’s always a small risk, and in the case of animals in crates, it can quickly be deadly.

**I beg you to NEVER PUT A COLLARED ANIMAL IN A CRATE. Take off the collar. Or at the least, get a “break-away” collar. I had never heard of these collars, but if they get caught on anything, they immediately break open, and free the dog.**

She knows she may open herself up to criticism but she’s willing to do so if it helps save the life of just one dog.

“I didn’t know whether to share this story or not. I feel so guilty that it happened. Now in hindsight, I see so many ways it could have been prevented. But if it saves even ONE dog’s life, it’s worth it to share.”

The family had to bury their beloved pet, and went outside at sunset to say goodbye. When they did, an unusual light show of lightning bugs offered some hope that Emmie’s memory would always be with them.

“We saw dozens and dozens of lightning bugs flying all around… some almost landing on us, some hovering over her grave, and many lighting up at the edge of the woods. I grew up in the country, and have never seen so many at one time before. It was a beautiful sight. I like to think they were sent by Emmie. She certainly “lit” up our lives, and I pray we did hers as well.”

We thank her for sharing Emmie’s story and are happy to share it with everyone we can. We are so sorry for the family’s loss.