Family Says Final Goodbye To George H.W. Bush In Church Where He Worshipped For 50 Years 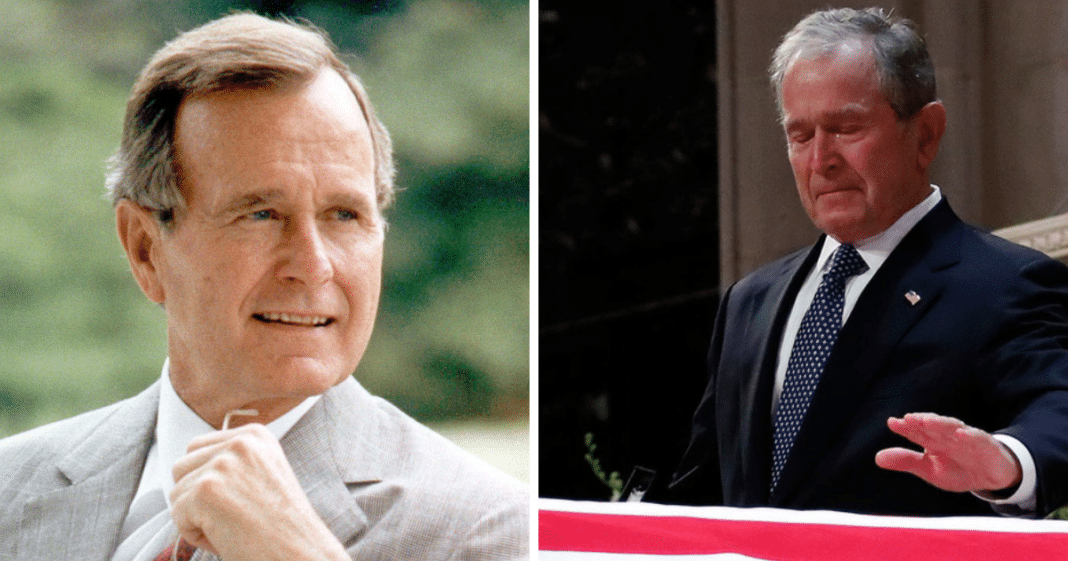 Former President George H.W. Bush was a charter member of the Greatest Generation whose contributions to America are “etched in the marble of time,” former Secretary of State James Baker told a somber crowd of more than 1,000 mourners Thursday.

“He possessed the classic virtues of our civilization and of his faith,” Baker, a longtime friend who served during Bush’s administration, said in a moving eulogy filled with both laughter and tears.

Classy move by the United Airlines folks at George Bush Intercontinental Airport today. No flights from Gate 41 today, instead this is there.

The final service was held at Bush’s beloved St. Martin’s Episcopal Church, the spiritual home to George H.W. and Barbara Bush for the past half-century. It kicked off with renditions of “America the Beautiful” and “The Star-Spangled Banner,” and granddaughters of the former president provided readings from Scripture.

Seemingly endless line of mourners gathered outside to pay their final respects.

Briefed in 2011 about his funeral and lying in state, the 41st President asked with typical humility, "Do you think anyone will come?" Tonight, people are waiting hours to pay their respects. This photo, taken Monday, is courtesy the Senate Press Photographers’ Gallery pool. pic.twitter.com/jveNxNlUYV

In an earlier service on Wednesday, hundreds gathered at the National Cathedral in Washington, D.C., to celebrate the former president’s life and mourn his passing.

The 41st President’s son George W. Bush gave a heartfelt eulogy highlighting the many incredible things his father did over his lifetime. But it was the end of this speech, in which he reflected on his father’s tight bond with his children, his enduring love for his wife, and his constant grief over the loss of his daughter, Robin, in 1954, that brought even this stoic former president to tears.

TOUCHING: George W. Bush tearfully concluded his eulogy to his father: “Through our tears let us know the blessings of knowing and loving you. A great and noble man. The best father a son or daughter could have… And in our grief, let us smile knowing he’s hugging Robin and holding mom’s hand again.” Watch his full eulogy here: https://bit.ly/2ruRoWx

“The best father a son or daughter can have,” Bush said, his voice breaking with emotion.

“And in our grief, let us smile knowing that dad is hugging Robin and holding mom’s hand again.”

George W. revealed that in the final hours before his beloved father’s death, he was able to speak to him on the phone and tell him that he was a wonderful dad.

The elder Bush finished the phone call with what would be his final words: “I love you, too.”

Our thoughts and prayers are with the Bush Family, and we wish them a speedy recovery.