Family leaves behind new puppy at pet hospital after learning diagnosis, that’s when veterinarian steps in 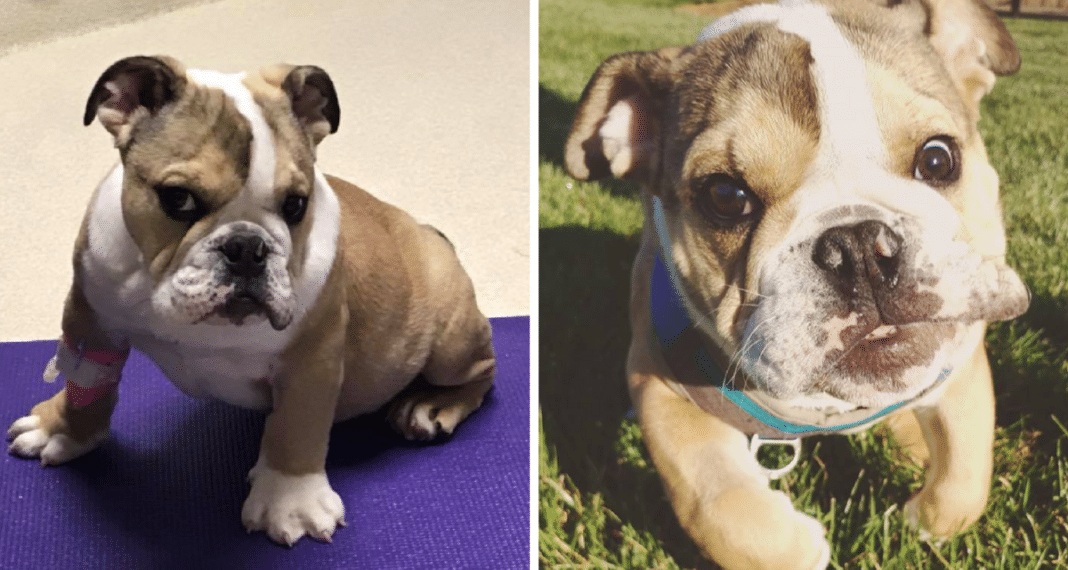 Huck is a bulldog puppy a family purchased from a breeder. Not long after taking him home, they noticed something was wrong with him. The little guy couldn’t control his body functions. The family worried that his problems could be serious, so they returned to the breeder.

The breeder gave them a new, healthy puppy, but refused to take Huck back. The family was afraid to leave Huck with the breeder for fear he wouldn’t be cared for. they opted to take both dogs to the vet to see what was what. Both dogs needed to be examined, and they wanted to learn about what was going on with Huck.

Dr. Laity works at Harbor Point Animal Hospital. X-rays were taken of Huck, and a prediagnosis of spina bifida was given. The Spina Bifida Association says spina bifida, “happens when parts of the spinal cord and nerves come through the open part of the spine. It causes nerve damage and other disabilities.”

After they learned of Huck’s diagnosis, the family decided to surrender him to the clinic. Dr. Laity took Huck home with her for the weekend; and a few days later, a neurologist confirmed her diagnosis. The vet fell in love with the bulldog pup over that weekend, so she adopted him.

“Dr. Laity couldn’t resist Huck, and she and everyone at Harbor Point fell in love with him instantly,” Amy Laity, practice manager at Harbor Point Animal Hospital and Dr. Laity’s wife, told  The Dodo. “She couldn’t give him up and risk that he would end up in a home that couldn’t properly care for him, or even worse, end up euthanized.”

With his condition, Huck requires specialized care, but since Dr. Laity was a vet, this wouldn’t be an issue. He needs to wear a diaper 24/7; he also wears a belly band and needs lots of baths. Neither Huck nor the doc mind those. “He loves trying to hop into the bathtub and seems to really enjoy the water,” Amy Laity said. “He has quickly learned to stand and hold still for his frequent diaper changes, and is a really good sport about wearing all of the silly outfits we put him in!”

Someone received his first piece of fan mail today! May the force be with you! ??

Huck can’t be left alone for too long. Dr. Laity brings him to work with her where everyone can give him the attention and care he demands. Clients and staff have fallen in love with the bulldog pup. He’s become a local celebrity.

“He participates in doggy daycare to help him learn good socialization skills,” Amy Laity said. “In between play sessions, he mostly hangs out with the receptionists and helps greet our clients. People will come in just to see him and take pictures! Last week a client came in just to  take a selfie with him and told us that his kids were going to be so jealous because he’s ‘famous.’”

Huck says having a full time job is hard work!

He gets plenty of fun and playtime at home too; Huck loves hanging out with his other canine pals – two labs and a boxer. The feline family members aren’t too keen to play with him yet.

“You really wouldn’t know anything was wrong with him if he didn’t have his diapers,” Amy Laity said. “He is a happy, healthy, playful puppy!”