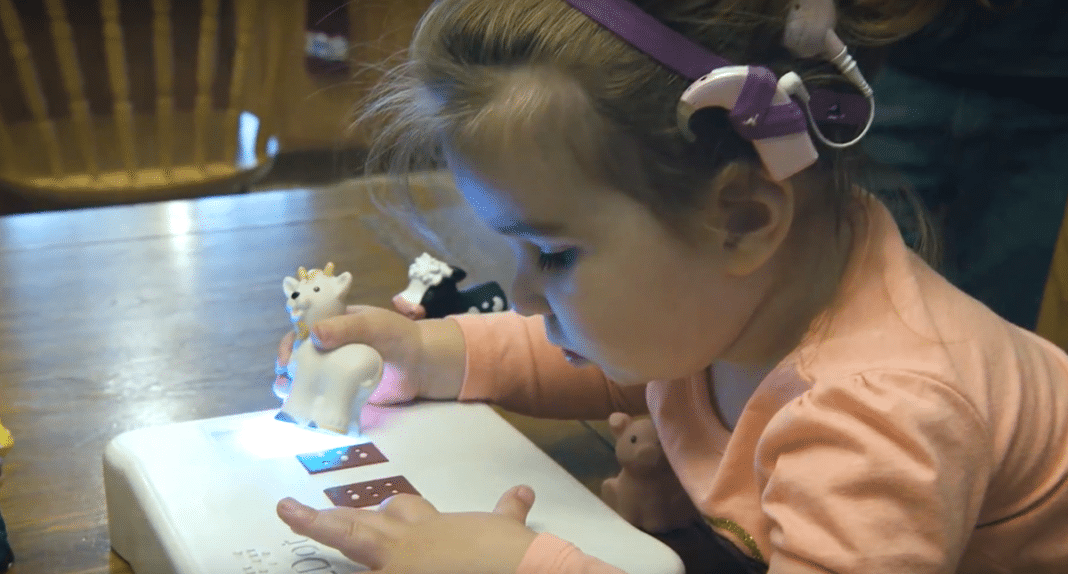 A family in Middleborough, Massachusetts faced the difficult news that their little girl, Rebecca was born deaf in 2016. Jacob and Beth Lacourse learned to adapt, adjusting their lives and learning sign language. Then they learned Rebecca’s life would face additional challenges: She had a rare disease called Usher Syndrome and will likely lose her vision by the time she becomes a teenager.

“It was devastating. You go through a period of mourning and you feel like a piece of your daughter has died,” Jacob, said in an interview for People. “We both were devastated for a few days, but over time it was like, ‘Hey, this is who she is. We’re gonna make it work.’ I like to adapt the world to her needs.”

The loving parents knew that Rebecca would face challenges learning, noting that other kids have plenty of toys to help them learn language during their formative years. How would they help Rebecca learn Braille? There didn’t seem to be much available for kids in her situation to play with.

Fortunately, Jacob’s position as an engineer, where he worked in product development for twenty years, made him uniquely suited to solving complex problems. He decided to develop his own solution to teach literacy to blind children early on in life, ensuring they would have the skills they needed later in life.

He called his new invention, the BecDot, a device that can identify toys and respond interactively with raised surface Braille letters that correspond to the name of that toy. The toy has flashing lights and sound effects, making it fun to play with. The toy is so interesting that it draws interest from other kids, which Jacob believes helps give a sense of inclusion to Rebecca.

This dad created a toy that helps visually impaired children learn braille after his own child was diagnosed with Usher Syndrome #BecDot https://t.co/Wu7R0BSQOJ pic.twitter.com/lJEYkvBxOZ

The BecDot won an award at the Consumer Electronics Show in LasVegas, and now the inventor is hoping he’ll be able to offer the toy at an affordable price, getting it into the hands of more children with visual impairments.

See more in the video from Not Impossible regarding their 2018 Limitless Award Winner, the BecDot: