Family Dog Drags Dad Down To Dam, Heart Drops When He Sees What’s Floating In Water 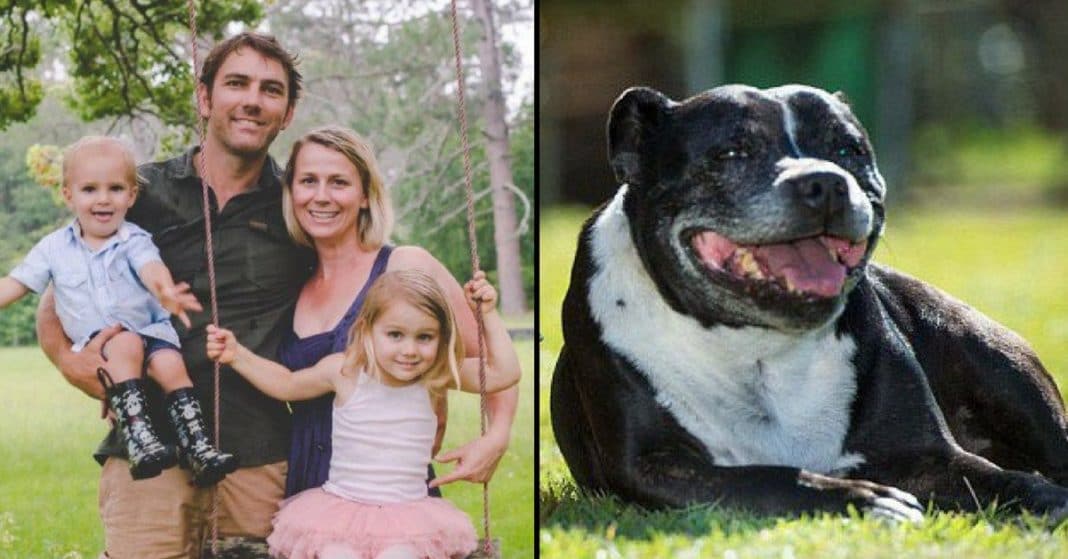 David Kenney and his family were visiting friends near Brisbane, Australia, when their 9-year-old Staffordshire bull terrier, Leala, came running up to the house soaking wet. She was barking and appeared frantic, so David followed her. She took him to a nearby dam.

When they got there, David saw something that made him go cold. His two-year-old son, Alexander, was floating face down in the water.

“It was what I wished not to see,” David said, “it was a mixture of disbelief, horror, and sadness, it was indescribable really, but then everything was a blur.”

David and his friends, Jason and Joshua Cluff, performed CPR on the boy for 27 minutes until the paramedics arrived. Finally, they were able to restart his heart, but they didn’t know if the boy would make it.

Lisa Brockbank, Alexander’s mother, was on her way back to the house when an ambulance raced past her. She was curious about what was going on, but nothing could have prepared her for what she found.

“I didn’t think it was my kid,” she said. “I didn’t think it had anything to do with us, and then I came to [see] a helicopter in the sky and the whole place just alive with police and ambulances and my son just lying there completely comatose.”

Members of the Westpac Rescue helicopter team pulled Lisa aside and told her the horrible news.

“They pulled me aside and told me this is as bad as it gets, there’s not a lot of hope, you should prepare for the worst possible outcome,” she recalled.

With his little life in the balance, Alexander was airlifted to Brisbane’s Lady Cilento Hospital. He was admitted to the Paediatric Intensive Care Unit and put into an induced coma.

“The doctors said, ‘Be prepared, you may not be taking this boy home, and if you do take him home he’ll probably have some brain damage,'” Lisa recalled. “From a parent’s point of view, it doesn’t get much worse.”

Amazingly, though, Alexander beat the odds against him, surprising hospital staff and his parents with his miraculous recovery. Within 48 hours, doctors brought the tot out of his induced coma and, soon after, he was able to breathe on his own.

But it was his first words after waking up that melted the hearts of all the PICU staff.

“It was quite miraculous that he came back so soon and so clear and fine and unchanged.”

The doctors were astounded by the little boy’s quick recovery. They attributed it to the immediate actions of David and his friends performing CPR on the child, which allowed oxygen to flow to his brain.

“The doctors put it down to CPR being administered correctly when he was pulled from the water.”

But David knows they can’t take all the credit for saving little Alexander. If it weren’t for Leala’s quick and insistent actions, they never would have found his son in time.

“Without obviously the dog and my two mates, he would be…” the emotional father reflected before choking up.

“Everything that went along in its little series, what happened was just flawless with maybe a little bit of luck chucked in.”

After Alexander was released from the hospital, things quickly returned to normal for the mischievous toddler and his parents. The relieved father said his little guy was in good spirits.

“You don’t want to rouse on him because he’s had a pretty rough time but you’re blessed to have him doing these little ratbag things, being a little monkey and getting into trouble.

“But you know, he’s cheated death, but he can’t get away with murder, you gotta do what you’ve got to do.”

Trouble-maker or not, I’m sure this ordeal has made Alexander’s parents even more thankful for their little monkey. And they’ll be forever grateful to their heroic and life-saving dog Leala!

Help us spread Leala’s incredible story of heroism! Share this!