Dog About To Be Put Down, But Moments Before Student Finds Something That Changes Everything 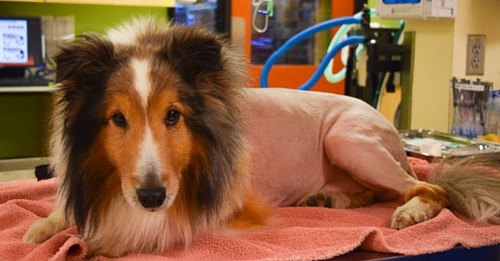 After coming home from a camping trip, this 10-week-old pup’s owner noticed something weird about the sheltie’s behavior. The dog, Ollie, was usually filled with lots of energy, but after the trip he seemed very weak and lazy.

Ollie was taken to the vet where they conducted tests and did blood work to find out what was wrong with him, but no one could seem to figure it out. The poor dog eventually became paralyzed and couldn’t eat at all.

Two weeks later, the family decided to put Ollie down because it was simply too difficult to see him the way he was.

When it came time to put the pup to sleep, one of the veterinary students was scratching Ollie’s head, trying to make him comfortable beforehand. That was when she discovered a tick behind his ear.

Ollie ended up being diagnosed with tick paralysis. Dr. Adam Stone, the vet who was to put Ollie to sleep, had never seen this before, but had once learned about it while going through school.

The tick was immediately removed and Ollie was shaved down and searched for more just in case.

Eventually Ollie was sent home, and his owner said he is already up and moving again.

“He was one minute away from euthanasia,” the owner, Al, said. “The doctor walked in and remembered that he heard about this in school. He told me it was just one little thing, one slide, and they mentioned it and [that] it was rare, and that was it. He had never seen a case before in his career.”

Al and his family credit the doctor and the student for saving Ollie’s life.

Were you happy to see Ollie’s life saved at the last minute? So share this!