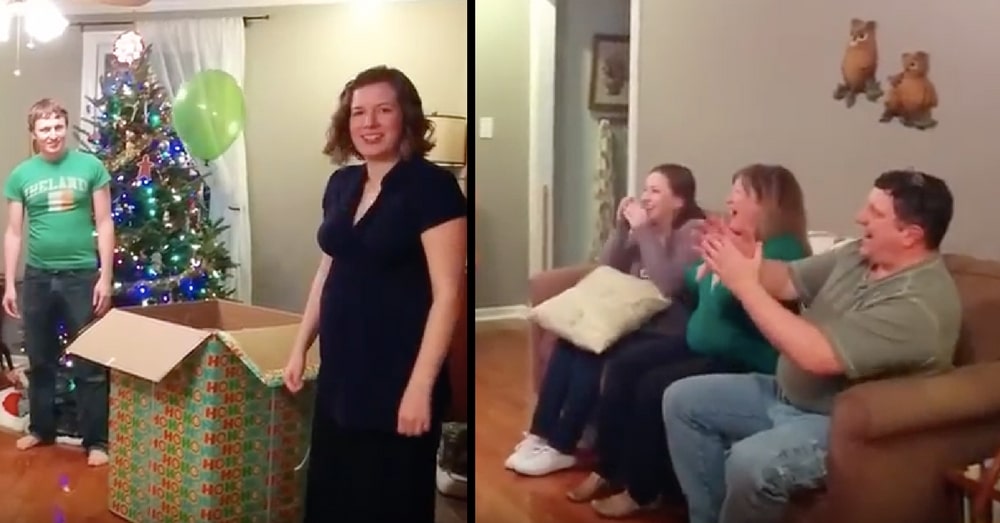 Gender reveal parties are a newer phenomenon, but they have exploded in popularity because of the fun it is to celebrate the surprise with family and friends. Many gender reveal videos have gone viral for different reasons, but this one might just take the cake!

Matthew Conwell and his wife were expecting their second child so they gathered the family together for the big gender reveal. The expectant couple stood by a giant box and asked the family what gender they thought the baby would be.

“I don’t want to say what I think it’s going to be,” his mother began before admitting, “I want a girl.”

“But whatever it is, we’re going to be thrilled,” she added.

The rest of the family weighed in on what gender they thought the baby would be, and then it was time to open the box.

Matthew and his wife grabbed the top of the box and ripped it open, but when a single green balloon popped up the family stared at it in confusion.

All of a sudden something else popped out of the box that made the entire family scream for joy! Click below to see what the big surprise was:

Out of the box popped Matthew’s brother Patrick, home from his nine-month deployment in Afghanistan.

The family couldn’t have been more happy or surprised to see him, but they all agreed it was the best surprise they could have imagined!

Then Patrick got to share one more secret: the baby is a girl!

Did you love this soldier’s extra-sneaky surprise as much as we did? So share this!